Pearson qualifications. Programming Ruby: The Pragmatic Programmer's Guide. Modules are a way of grouping together methods, classes, and constants. 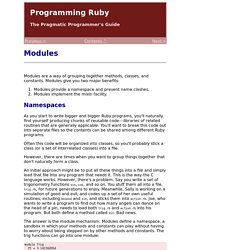 Modules give you two major benefits: Modules provide a namespace and prevent name clashes. Modules implement the mixin facility. Namespaces As you start to write bigger and bigger Ruby programs, you'll naturally find yourself producing chunks of reusable code---libraries of related routines that are generally applicable. You'll want to break this code out into separate files so the contents can be shared among different Ruby programs. Mixins Modules have another, wonderful use. Instance Variables in Mixins. Untitled. Rmdir (rd) Removes (that is, deletes) a directory. 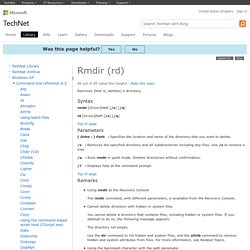 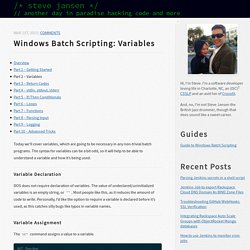 The syntax for variables can be a bit odd, so it will help to be able to understand a variable and how it’s being used. Variable Declaration DOS does not require declaration of variables. How Plug and Play Works: General. In this section With Plug and Play under Microsoft Windows Server 2003, you can connect a hardware device to your system and leave the job of configuring and starting the device to the operating system. 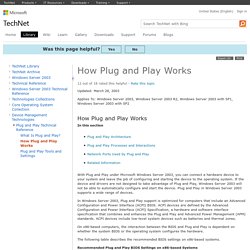 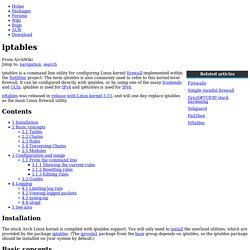 The term iptables is also commonly used to refer to this kernel-level firewall. It can be configured directly with iptables, or by using one of the many frontends and GUIs. iptables is used for IPv4 and ip6tables is used for IPv6. nftables was released in release with Linux kernel 3.13, and will one day replace iptables as the main Linux firewall utility. Installation The stock Arch Linux kernel is compiled with iptables support. Basic concepts. Computing (2016) - NQF. 18 Excellent Tutorials Compilation To Start Working With Raspberry Pi. The Raspberry Pi single-board computer is a common platform for robotics applications. 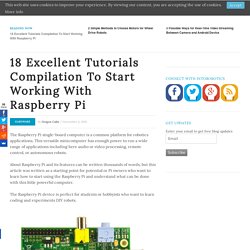 Python supports the creation of anonymous functions (i.e. functions that are not bound to a name) at runtime, using a construct called "lambda". 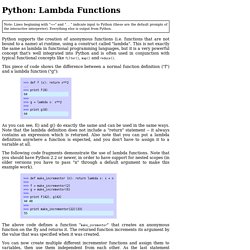 This is not exactly the same as lambda in functional programming languages, but it is a very powerful concept that's well integrated into Python and is often used in conjunction with typical functional concepts like filter(), map() and reduce(). This piece of code shows the difference between a normal function definition ("f") and a lambda function ("g"): As you can see, f() and g() do exactly the same and can be used in the same ways.

Note that the lambda definition does not include a "return" statement -- it always contains an expression which is returned. Thenewboston Videos and Tutorials - Free Educational Video Tutorials on Computer Programming, Adobe Software, Computer Science and More! ExplainingComputers.com: Hardware. Hardware Hardware refers to all of the physical parts of a computer system. 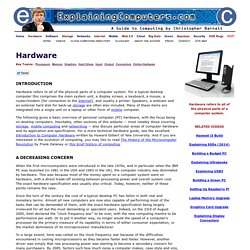 For a typical desktop computer this comprises the main system unit, a display screen, a keyboard, a mouse, a router/modem (for connection to the Internet), and usually a printer. Speakers, a webcam and an external hard disk for back-up storage are often also included. Many of these items are integrated into a single unit on a laptop or other form of mobile computer. The following gives a basic overview of personal computer (PC) hardware, with the focus being on desktop computers. HTG Explains: Do You Really Need to Defrag Your PC? Ask any PC tech person how to make your computer faster, and almost every one of them will tell you to defrag your PC. 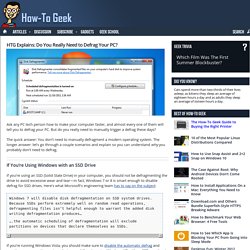 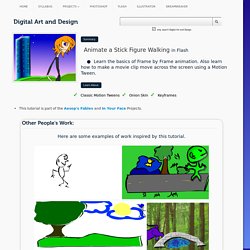 Unit31 Assignment 3. Deadlines Issue Date: 9th September 2014 Hand in deadline (for feedback): 18 October 2014 Final submission deadline: Friday 23 November 2014. Program Arcade Games With Python And Pygame. Are you here because you want to create your own games? Excellent! Here are some videos of games students have created by the end of this course: This foreword has two parts: Getting your computer set up to write games.Job and career prospects in technology. Creating timeline animations. To animate layer content in timeline mode, you set keyframes in the Animation panel (Photoshop Extended CS5) or Timeline panel (CS6), as you move the current-time indicator to a different time/frame, and then modify the position, opacity, or style of the layer content. Photoshop automatically adds or modifies a series of frames between two existing frames—varying the layer properties (position, opacity, and styles) evenly between the new frames to create the appearance of movement or transformation.

For example, if you want to fade out a layer, set the opacity of the layer in the starting frame to 100% and click the Opacity stopwatch for the layer. Disposal Methods in Animation Studio. When working in Animation Studio's Frames tab, there are two panes on the right side that are used to configure settings that apply to the entire animation or just to the selected frame(s). Below the Frame Properties is a property labeled "Disposal" that is extremely useful when creating optimized images. This is where you can configure the selected frame's Disposal Method. This describes what should be done with the animation canvas after the selected frame has been displayed for the amount of time selected in the Delay property. For many animations, you won't need to change the default disposal method. Flash MX Developers Guide. Flash and ActionScript Tutorials.

Web>> flash>> actionscript>> programmatic movement. In this example, our ball has three new features: it bounces off the walls, it can be sized, and its speed can be controlled. before we can bounce our object off a wall, we first have to move it (using the "move" subroutine). we add the wall collision code to the "move" subroutine. once the ball is moved, we check its location to see if it has gone beyond its allowed boundaries (set as "leftmax", "rightmax", "topmax", and "bottommax"). let's take the left wall as an example to show how: if the x value of the ball's centre point plus its radius is less than the value of the left edge of the canvas (in the demo, zero), then the ball has exceeded the left wall. If (obj1_x < (leftmax + obj1_radius)) when we know the ball has been moved outside of the boundaries, we have to recalculate the real location of the ball. in other words, if the ball had not gone through the wall, but had actually bounced off it, where would it be now?

Flash and ActionScript Tutorials. 2. Interface and Navigation - Blender Cookie. Unit 1 Communication and Employability Skills for IT - BTEC Diploma in IT. Introduction.