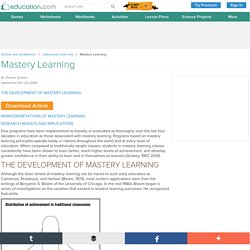 Programs based on mastery learning principles operate today in nations throughout the world and at every level of education. When compared to traditionally taught classes, students in mastery learning classes consistently have been shown to learn better, reach higher levels of achievement, and develop greater confidence in their ability to learn and in themselves as learners (Guskey, 1997, 2001). Although the basic tenets of mastery learning can be traced to such early educators as Comenius, Pestalozzi, and Herbart (Bloom, 1974), most modern applications stem from the writings of Benjamin S. Bloom of the University of Chicago. In the mid-1960s Bloom began a series of investigations on the variation that existed in student learning outcomes. Figure 1 Figure 2 There are many alternative strategies for mastery learning. Ordering & Administration.

Holidays designed for you. Only from Thomson. Enlight Login. 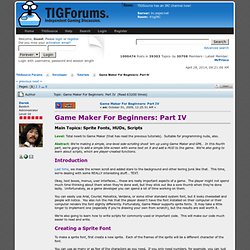 Suitable for programming nubs, also. Abstract: We're making a simple, one-level side-scrolling shoot 'em up using Game Maker and GML. In this fourth part, we're going to add a simple title screen with some text on it and add a HUD to the game. Introduction Last time, we made the screen scroll and added stars to the background and other boring junk like that. Okay, text boxes, menus, user interfaces... these are really important aspects of a game. You can easily use Arial, Courier, Helvetica, Verdana, or some other standard system font, but it looks cheeseball and people will notice. 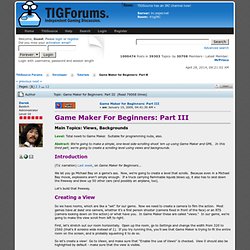 Suitable for programming nubs, also. Abstract: We're going to make a simple, one-level side-scrolling shoot 'em up using Game Maker and GML. In this third part, we're going to create a scrolling level using views and backgrounds. Introduction (T.V. narration) Last week, on Game Maker for Beginners... We let you go Michael Bay on a game's ass. Let's build that freeway. Creating a View So we have rooms, which are like a "set" for our game. First, let's stretch out our room horizontally. So let's create a view! Also: View in room - the size of the view. Port to screen - how big the view looks. Object following - in our game, the scrolling will be automatic, but in many games, you want the view to follow the player or some other object. With the view created, you should see a white rectangle in your room defining its boundaries (this will not appear in the game, of course). Make It Scroll That's it! Game Maker For Beginners: Part II. 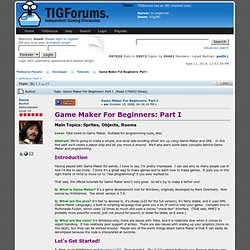 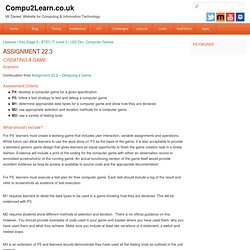 Assessment Criteria P4: develop a computer game for a given specification.P5: follow a test strategy to test and debug a computer gameM1: determine appropriate data types for a computer game and show how they are declared.M2: use appropriate selection and iteration methods for a computer game.M3: use a variety of testing tools What should I include? Digital Worlds - Interactive Media and Game Design. Although Game Maker’s visual environment provide a friendly interface to many users, some people (particularly experienced programmers) may find it more natural to construct programmes using the text based Game Maker Language (GML). 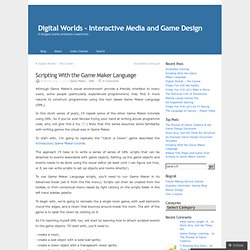 In this short series of posts, I’ll repeat some of the other Game Maker tutorials using GML. So if you’ve ever fancied trying your hand at writing actual programme code, why not give this a try…? :-) Note that this series assumes some familiarity with writing games the visual way in Game Maker. To start with, I’m going to replicate the “Catch a Clown” game described the introductory Game Maker tutorial. The approach I’ll take is to write a series of series of GML scripts that can be attached to events associated with game objects, Setting up the game objects and events needs to be done using the visual editor (at least until I can figure out how, or if, we can write scripts to set up objects and rooms directly!)