How to Fuel for a Solo, Unassisted Antarctic Crossing. Jamanetwork. Early warning signals of the coronary heart disease (CHD) risk of sugar (sucrose) emerged in the 1950s. 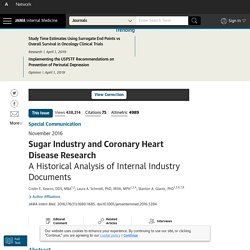 We examined Sugar Research Foundation (SRF) internal documents, historical reports, and statements relevant to early debates about the dietary causes of CHD and assembled findings chronologically into a narrative case study. Diet and Health: Puzzling Past Paradox to PURE Understanding (or: what the PURE study really means...) Huge new study casts doubt on conventional wisdom about fat and carbs. An international study is casting doubt on the wisdom of eating lots of carbohydrates. 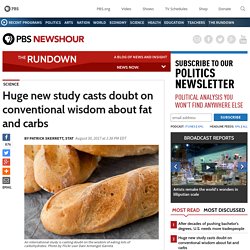 Photo by Flickr user Dani Armengol Garreta Fat, once a dirty word when it came to diet, has been edging back toward respectability. New results from a huge international study help continue to reshape its image while at the same time casting doubt on the wisdom of eating lots of carbohydrates and questioning the “more is better” recommendations for eating fruits and vegetables. The latest evidence comes from data released Tuesday by the international Prospective Urban Rural Epidemiology (PURE) study. Its research team recorded the eating habits of 135,000 adults in 18 countries — including high-income, medium-income, and low-income nations — and followed the participants’ health for more than seven years on average. “These results point to the fact that human biology is very similar across the globe,” said Dr. The Top 25 Alkaline Foods on the Planet (Eat more to prevent cancer, obesity and heart disease) The Standard American Diet is full of junk foods, processed, and genetically modified foods, and it is a huge burden for our body to process it. 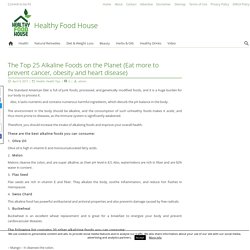 Also, it lacks nutrients and contains numerous harmful ingredients, which disturb the pH balance in the body. The environment in the body should be alkaline, and the consumption of such unhealthy foods makes it acidic, and thus more prone to diseases, as the immune system is significantly weakened. Therefore, you should increase the intake of alkalizing foods and improve your overall health. These are the best alkaline foods you can consume: Olive Oil Olive oil is high in vitamin E and monounsaturated fatty acids. Melon Melons cleanse the colon, and are super alkaline, as their pH level is 8.5. Flax Seed Flax seeds are rich in vitamin E and fiber. Swiss Chard This alkaline food has powerful antibacterial and antiviral properties and also prevents damage caused by free radicals.

Buckwheat – Carrots – They are rich in beta-carotene and improve eyesight. Mustard greens. When researchers study the antioxidant benefits of vegetables, no group of phytonutrients has gotten more attention than the group known as "phenols. 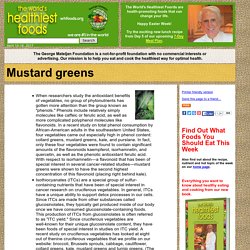 " Phenols include relatively simply molecules like caffeic or ferulic acid, as well as more complicated polyphenol molecules like flavonoids. In a recent study on total phenol consumption by African-American adults in the southeastern United States, four vegetables came out especially high in phenol content: collard greens, mustard greens, kale, and purslane. New study finds that eating whole grains increases metabolism and calorie loss. The Association of Hot Red Chili Pepper Consumption and Mortality: A Large Population-Based Cohort Study. Abstract The evidence base for the health effects of spice consumption is insufficient, with only one large population-based study and no reports from Europe or North America. 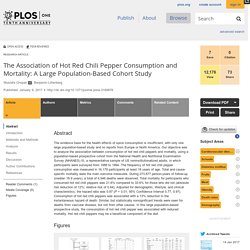 Our objective was to analyze the association between consumption of hot red chili peppers and mortality, using a population-based prospective cohort from the National Health and Nutritional Examination Survey (NHANES) III, a representative sample of US noninstitutionalized adults, in which participants were surveyed from 1988 to 1994. The frequency of hot red chili pepper consumption was measured in 16,179 participants at least 18 years of age. Total and cause-specific mortality were the main outcome measures.

During 273,877 person-years of follow-up (median 18.9 years), a total of 4,946 deaths were observed. Medscape Access. Copper essential for burning fat, researchers find. Is copper deficiency contributing to the obesity epidemic? 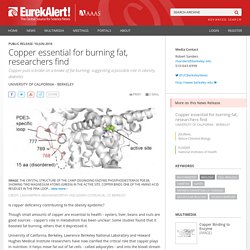 Though small amounts of copper are essential to health - oysters, liver, beans and nuts are good sources - copper's role in metabolism has been unclear: Some studies found that it boosted fat burning, others that it depressed it. University of California, Berkeley, Lawrence Berkeley National Laboratory and Howard Hughes Medical Institute researchers have now clarified the critical role that copper plays in nutrition: It helps move fat out of fat cells - called adipocytes - and into the blood stream for use as energy. Without enough copper, fat builds up in fat cells without being utilized, said Christopher Chang, the Class of 1942 Chair and a professor of chemistry and of molecular and cell biology at UC Berkeley.

The new study appeared online this week, and will be published in the July print issue of the journal Nature Chemical Biology. Chang cautions against ingesting copper supplements as a result of these studies, however. Researchers have found a ‘striking’ new side effect from eating fast food. The fries are not all right. 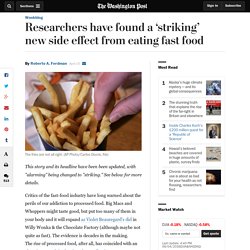 (AP Photo/Carlos Osorio, file) This story and its headline have been been updated, with "alarming" being changed to "striking. " See below for more details. Critics of the fast-food industry have long warned about the perils of our addiction to processed food. Ehp.1510803.