Violent spring: The nature book that predicted the future. JA Baker’s The Peregrine is 50 years old, but it feels as if it were written yesterday. 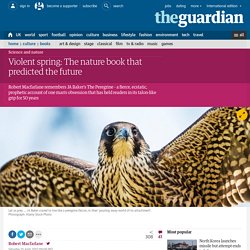 In the half century since its publication, this fierce little book has only tightened its talon grip on us. It reads now as uncannily prophetic: of the Anthropocene (our geological age, in which human activity is now the dominant influence on the environment), of extinction events, of dark ecology – even of virtual reality. In ancient Rome a haruspex was a person trained in a form of divination based on inspecting the entrails of sacrificed animals. Baker’s book – strewn as it is with eviscerated birds, obsessed as it is with prediction – is a text of killing and foretelling: of seeing the future in blood and guts. It has haruspicated our present, and I suspect its prescience is not yet all used up. The story of The Peregrine’s writing is remarkable, and has a mystery at its heart. I’ve never taken LSD: thanks to Baker, I don’t need to. The 8 books librarians can't stop talking about right now. New York Public Library. 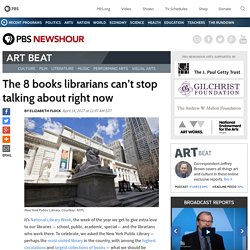 Courtesy: NYPL It’s National Library Week, the week of the year we get to give extra love to our libraries — school, public, academic, special — and the librarians who work there. To celebrate, we asked the New York Public Library — perhaps the most-visited library in the country, with among the highest circulations and largest collections of books — what we should be reading right now. Here are eight of the staff’s top picks, “the titles they’re passionate about — the ones they can’t stop talking about and can’t wait to share,” Nora Lyons of NYPL wrote NewsHour in an email. In their words: Credit: Penguin/RandomHouse. CULTURE N LIFESTYLE — FREE BOOKS: 100 LEGAL SITES TO DOWNLOAD LITERATURE. Looking for the next great book to sink your teeth into? 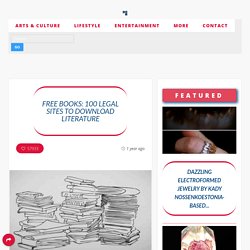 Look no further. Below are over 100 links to websites that provide free e-books on a huge variety of topics. Browse works by Mark Twain, Joseph Conrad and other famous authors here. Classic Bookshelf: This site has put classic novels online, from Charles Dickens to Charlotte Bronte.The Online Books Page: The University of Pennsylvania hosts this book search and database.Project Gutenberg: This famous site has over 27,000 free books online.Page by Page Books: Find books by Sir Arthur Conan Doyle and H.G.

Wells, as well as speeches from George W. Textbooks If you don’t absolutely need to pay for your textbooks, save yourself a few hundred dollars by reviewing these sites. Math and Science Turn to this list to find books about math, science, engineering and technology. WORDS N QUOTES. To Kill a Mockingbird, True Grit Top List of Must-Read Novels. NPR Books In The Seventh Bride, Ursula Vernon (writing as T.... : NPR. Best Religion Books Of 2013: A Roundup From Religion News Service. (RNS) Jesus, Paul, food, charity, and prayer were just some of the areas examined in this year’s crop of books under the broad heading of religion. 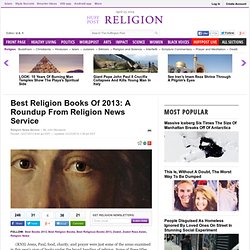 Some of these titles rank at the top of the year’s best books, period. Others barely registered in the mainstream press, but are lavishly praised in their own fields. Here’s Religion News Service’s list of the year’s most interesting religion books, numbered but not ranked. 1. “My Bright Abyss: Meditation of a Modern Believer,” by Christian Wiman When he learned he had a rare form of cancer at age 39, Wiman was the editor of Poetry magazine, perched atop the nation’s most prestigious journal of verse. 2. In this magnum opus, one of the most prolific Christian theologians of our time lays out his case for Paul as a thinker on par with Aristotle and Plato. 3. 4.

Penned nearly 80 years ago, these private journal entries have found the light of day thanks to a biographer’s diligent archival rummaging. Now & then: an unforeseeable future - Gonzaga University Student Publications: Arts & Entertainment. Growing up is a slow, difficult and painful process filled with responsibility and permanent change. 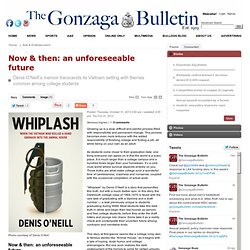 This process becomes even more arduous with the added responsibility of finishing college and finding a job, all while being on your own as an adult. As students come closer to their graduation date, one thing everyone can agree on is that the world is a scary place. It is much larger than a college campus and a hundred times larger than your hometown. It’s a cold, cruel world where survival depends entirely on you. Those truths are what make college such a wonderful time of carelessness, craziness and nonsense, coupled with the occasional completion of actual work. “Whiplash” by Denis O’Neill is a story that personifies this truth, but with a much darker spin. This story at first glance seems like a college romp akin to famous stories like “Animal House,” as it begins with a tale of hazing, dude humor and college shenanigans.