Blood From Human Umbilical Cords Can Rejuvenate Old Mouse Brains - The Atlantic. When a baby is born, the now-useless umbilical cord is usually thrown away. 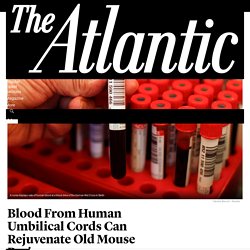 But sometimes, it finds renewed purpose. Parents can decide to donate the blood from the cord to blood banks, which freeze the stem cells within so they can eventually be used to treat people with various cancers and genetic disorders. In the process, plasma—the liquid portion of blood—is usually ignored. But neuroscientist Tony Wyss-Coray thinks this liquid has a purpose, too. Experts excited by brain 'wonder-drug' Image copyright Getty Images Scientists hope they have found a drug to stop all neurodegenerative brain diseases, including dementia. 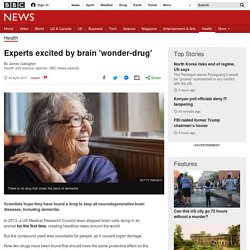 In 2013, a UK Medical Research Council team stopped brain cells dying in an animal for the first time, creating headline news around the world. But the compound used was unsuitable for people, as it caused organ damage. Now two drugs have been found that should have the same protective effect on the brain and are already safely used in people. "It's really exciting," said Prof Giovanna Mallucci, from the MRC Toxicology Unit in Leicester. She wants to start human clinical trials on dementia patients soon and expects to know whether the drugs work within two to three years. Why might they work? The novel approach is focused on the natural defence mechanisms built into brain cells. Medscape Access. Medscape Access. Medscape Access. Medscape Access. Alzheimer's protein buildup disrupts the brain's navigation center. Alzheimer’s Plaque in Mice Cut in Half With Flashing Lights. Radiolab, a frequent favorite among the public radio set, uncharacteristically covered a bit of breaking news on Dec. 8, speaking to researchers who’d just published their novel approach to treating Alzheimer’s-infected lab mice. 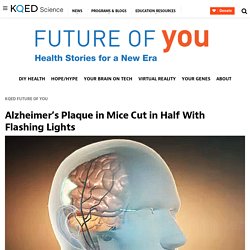 They found that after a week of treatment using optogenetics, which allows researchers to switch specific neurons in the brain on and off, the amyloid plaque that’s believed to contribute to Alzheimer’s was reduced by a startling 40 to 50 percent. The researchers at MIT’s Picower Institute for Learning and Memory inundated the brains of mice with bright flashing lights at a specific frequency, in order to trigger the nonfunctioning cells that normally clean the plaque to do their job again. Medscape Access. Beating Alzheimer’s With Brain Waves - The Atlantic. When a crowd starts to applaud, each person initially does so to their own rhythm. 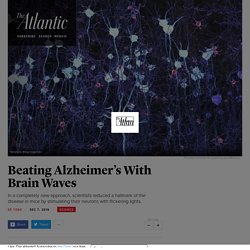 But in some cases, those claps can synchronize, with hundreds or thousands or millions of hands striking in unison. Something similar happens in the brain. When a single neuron fires, it sends an electrical pulse down its length. But large networks of neurons can also fire together, creating regular cycles of electrical activity that resemble the synchronized applause of a rapturous crowd. Formally, these are called neural oscillations; more colloquially, they’re brain waves. These waves are classified by how frequently the neurons fire in a single second. Beneficial effects of increased lysozyme levels in Alzheimer's disease modelled in Drosophila melanogaster - Sandin - 2016 - The FEBS Journal. Genetic polymorphisms of immune genes that associate with higher risk to develop Alzheimer's disease (AD) have led to an increased research interest on the involvement of the immune system in AD pathogenesis. 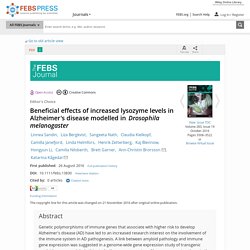 A link between amyloid pathology and immune gene expression was suggested in a genome-wide gene expression study of transgenic amyloid mouse models. In this study, the gene expression of lysozyme, a major player in the innate immune system, was found to be increased in a comparable pattern as the amyloid pathology developed in transgenic mouse models of AD. A similar pattern was seen at protein levels of lysozyme in human AD brain and CSF, but this lysozyme pattern was not seen in a tau transgenic mouse model. Lysozyme was demonstrated to be beneficial for different Drosophila melanogaster models of AD. Beneficial effects of increased lysozyme levels in Alzheimer's disease modelled in Drosophila melanogaster - Sandin - 2016 - The FEBS Journal. 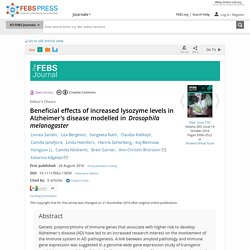 Nbcnews. Rates of Alzheimer's disease and other types of dementia appear to have fallen considerably since 2000, and better education may be partly responsible, researchers reported Monday. 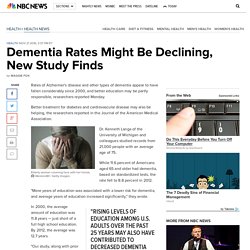 Better treatment for diabetes and cardiovascular disease may also be helping, the researchers reported in the Journal of the American Medical Association. Dr. Antibody Reduces Harmful Brain Amyloid Plaques in Alzheimer's Patients. Although the causes of Alzheimer's disease are still unknown, it is clear that the disease commences with progressive amyloid deposition in the brains of affected persons between ten and fifteen years before the emergence of initial clinical symptoms such as memory loss. 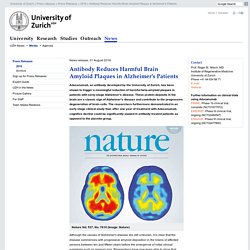 Researchers have now been able to show that Aducanumab, a human monoclonal antibody, selectively binds brain amyloid plaques, thus enabling microglial cells to remove the plaques. A one-year treatment with the antibody, as part of a phase Ib study, resulted in almost complete clearance of the brain amyloid plaques in the study group patients. The results, which were realized by researchers at UZH together with the biotech company “Biogen” and the UZH spin-off “Neurimmune,” have been published in the renowned science journal “Nature.” Reduction of brain amyloid plaque is dependent on treatment duration and dosage. Some People With Alzheimer’s Pathology Have Superior Memory – Neuroscience News. Summary: Some elderly people harbor extensive Alzheimer’s pathology in their brain and have no evidence of the cognitive decline associated with the disease, researchers report. 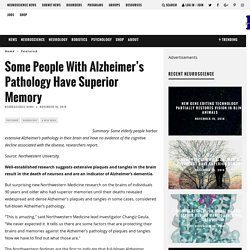 Source: Northwestern University. Well-established research suggests extensive plaques and tangles in the brain result in the death of neurons and are an indicator of Alzheimer’s dementia. But surprising new Northwestern Medicine research on the brains of individuals 90 years and older who had superior memories until their deaths revealed widespread and dense Alzheimer’s plaques and tangles in some cases, considered full-blown Alzheimer’s pathology.

“This is amazing,” said Northwestern Medicine lead investigator Changiz Geula. “We never expected it. New mechanism discovered for Alzheimer’s risk gene - Salk Institute for Biological Studies. More Than 50 Percent of People Over 90 With Alzheimer’s Use Psychotropic Drugs – Neuroscience News. Summary: According to a new study, hunger can suppress rival drive states such as fear, anxiety, thirst or social needs. 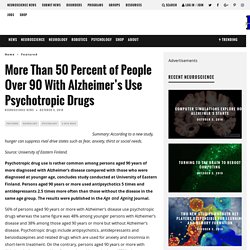 Their two studies, presented at the Alzheimer’s Association’s International Conference in Toronto, Canada, suggest that the University of Pennsylvania Smell Identification Test (UPSIT) may offer a practical, low-cost alternative to other tests. Neuroscience and stuff — medresearch: Study Reveals the Possibility of... The Guardian. Mitochondria Affect Stress Response ... Penn scientists make breakthrough in Alzheimer's disease research. University of Pennsylvania researchers have made some exciting strides in the fight against Alzheimer's and they hope the discoveries will lead to a delay in the onset of the disease. Almost half the people who live to be 85 years old will develop Alzheimer's disease. It's a debilitating condition that costs a staggering $600 billion a year worldwide. Philadelphia scientists are among those working harder than ever to stop it.

"This is a dream of all scientists that work on diseases," said Dr. Virginia Lee, Director of Center for Neurodegenerative Disease Research.