Why the White Brain Matters. If you set out to understand a building’s lighting system but examined only the ﬁxtures, switches, and outlets, never the wiring in the walls and basement, you might be pretty puzzled. 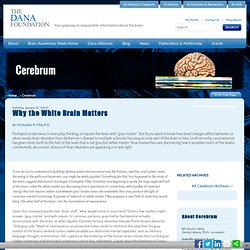 Something like that has happened in the study of the brain, suggests behavioral neurologist Christopher Filley. Scientists now beginning to probe the long-neglected half of the brain called the white matter are discovering how it specializes in connectivity, with bundles of insulated “wiring” that link neurons within and between gray matter areas into ensembles that may produce the light of conscious mental functioning.

A pioneer of research on white matter, Filley proposes a new ﬁeld of study that would bring “the other half of the brain” into the mainstream of neuroscience. Given the crossword puzzle clue “brain stuff,” what would come to your mind? Quite a few readers might answer “gray matter” and with reason. Cells in white matter perfectly support its role in connectivity. Does the head remain briefly conscious after decapitation (revisited)? A Straight Dope Classic from Cecil's Storehouse of Human Knowledge June 12, 1998. 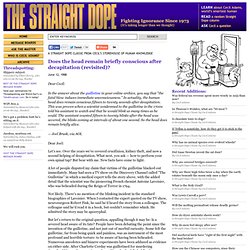 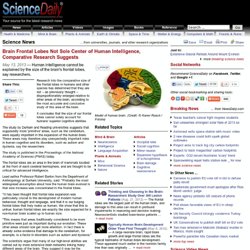 Research into the comparative size of the frontal lobes in humans and other species has determined that they are not -- as previously thought -- disproportionately enlarged relative to other areas of the brain, according to the most accurate and conclusive study of this area of the brain. It concludes that the size of our frontal lobes cannot solely account for humans' superior cognitive abilities. 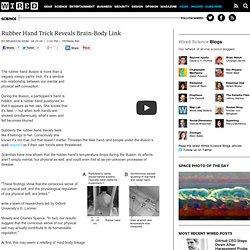 It’s a window into relationship between our mental and physical self-conception. During the illusion, a participant’s hand is hidden, and a rubber hand positioned so that it appears as her own. She knows that it’s fake — but when both hands are stroked simultaneously, what’s seen and felt becomes blurred. 5 Superpowers We All Had as Babies (According to Science) To many of us, kids are just a squishy bundle of preciousness that can't even take a decent punch. 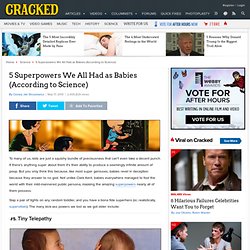 The 6 Most Mind-Blowing Animal Senses. You probably already know that when it comes to everything but intellectual pursuits and wearing cardigans in a knot over one's shoulders, animals have humans beat. 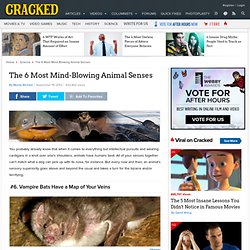 All of your senses together can't match what a dog can pick up with its nose, for instance. But every now and then, an animal's sensory superiority goes above and beyond the usual and takes a turn for the bizarre and/or terrifying. #6. Instant Expert 31: The human brain. Cookies on the New Scientist website close Our website uses cookies, which are small text files that are widely used in order to make websites work more effectively. 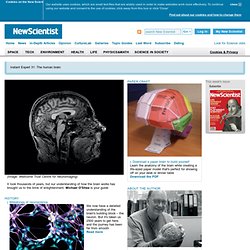 To continue using our website and consent to the use of cookies, click away from this box or click 'Close' 3D map of human brain is the most detailed ever - health - 20 June 2013. The Extended Mind. Andy Clark & David J. 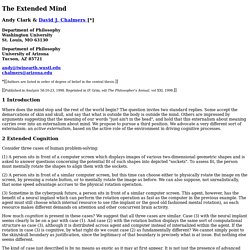 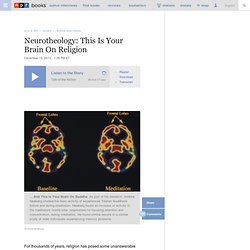 NewbergPaperback, 284 pagesAshgateList price: $29.95 "Neurotheology" is a unique field of scholarship and investigation that seeks to understand the relationship specifically between the brain and theology, and more broadly between the mind and religion. As a topic, neurotheology has garnered substantial attention in the academic and lay communities in recent years. Several books have been written addressing the relationship between the brain and religious experience and numerous scholarly articles have been published on the topic.

Smart-Kit: Online Puzzles & Games. Religion May Cause Brain Atrophy. Faith can open your mind but it can also cause your brain to shrink at a different rate, research suggests. 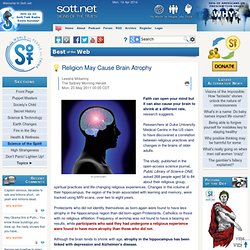 Researchers at Duke University Medical Centre in the US claim to have discovered a correlation between religious practices and changes in the brains of older adults. The study, published in the open-access science journal, Public Library of Science ONE, asked 268 people aged 58 to 84 about their religious group, spiritual practices and life-changing religious experiences.

With so many complex nutritional and ecological factors at work, could it be possible to develop a simple, yet effective treatment that addresses many of today's most prevalent health challenges? Amygdala activation. THE AMYGDALA AND ITS ALLIES. Central pattern generator. Central pattern generators (CPGs) are biological neural networks that produce rhythmic patterned outputs without sensory feedback.[1][2] CPGs have been shown to produce rhythmic outputs resembling normal "rhythmic motor pattern production" even in isolation from motor and sensory feedback from limbs and other muscle targets.[1][2] To be classified as a rhythmic generator, a CPG requires: 1.