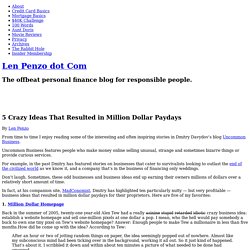 Uncommon Business features people who make money online selling unusual, strange and sometimes bizarre things or provide curious services. For example, in the past Dmitry has featured stories on businesses that cater to survivalists looking to outlast the end of the civilized world as we know it, and a company that’s in the business of financing only weddings. Don’t laugh. Sometimes, these odd businesses and business ideas end up earning their owners millions of dollars over a relatively short amount of time. In fact, at his companion site, MadConomist, Dmitry has highlighted ten particularly nutty — but very profitable — business ideas that resulted in million dollar paydays for their proprietors. 1. After an hour or two of jotting random things on paper, the idea seemingly popped out of nowhere. I hate you, Alex. 2. 3. 4.

A pack of 10 plastic bones runs $8.49. 10 Key Characteristics of Debt-Free People (of Modest Means) The other day a friend and I were discussing why some people manage to live their lives in complete control of their finances, while others are continually struggling to get out of debt — no matter how much money they make. 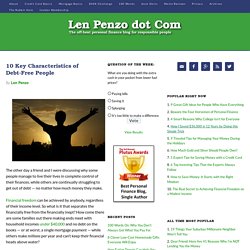 Financial freedom can be achieved by anybody, regardless of their income level. So what is it that separates the financially free from the financially inept? How come there are some families out there making ends meet with household incomes under $40,000 and no debt on the books — or at worst, a single mortgage payment — while others make millions per year and can’t keep their financial heads above water?

The truth is, there is no single trait that determines who will successfully manage their personal finances and those who won’t. If You Can’t Live on $40,000 Per Year, It’s Your Own Fault - Len Penzo dot Com. A couple of weeks ago I shared with you ten characteristics of debt-free people of modest means. 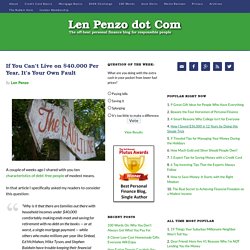 In that article I specifically asked my readers to consider this question: “Why is it that there are families out there with household incomes under $40,000 comfortably making ends meet and saving for retirement with no debt on the books — or at worst, a single mortgage payment — while others who make millions per year like Sinbad, Ed McMahon, Mike Tyson, and Stephen Baldwin have trouble keeping their financial heads above water?”

While my list of ten traits was met with general acceptance, I did manage to start up a minor debate between the readers as to whether or not it was really possible for the majority of folks here in the good ol’ United States of America to make ends meet on $40,000* per year. How can I make such a claim? Well, I live in Southern California, one of the most expensive places to live in the United States. How do I know for sure? But, Len, what about the mortgage? The Real Secret to Achieving Financial Freedom on a Modest Income - Len Penzo dot Com. Earlier this summer my teenage son revealed to me and the Honeybee that he has a girlfriend. 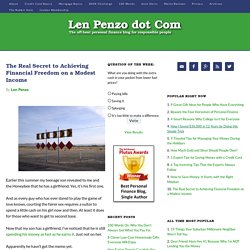 Yes, it’s his first one. And as every guy who has ever dared to play the game of love knows, courting the fairer sex requires a suitor to spend a little cash on his girl now and then. At least it does for those who want to get to second base. Now that my son has a girlfriend, I’ve noticed that he is still spending his money as fast as he earns it. Just not on her. Apparently he hasn’t got the memo yet. Dear Friend: Here Are 41 Reasons Why I’m NOT Lending You the Money. I recently saw a curious article in the Huffington Post that attempted to explain why our friends often fail to repay money that they borrow from us. 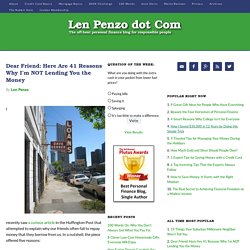 In a nutshell, the piece offered five reasons: You refuse to ask for the money back.You make it too easy for your friends to ignore you.You didn’t get the loan in writing.Your friends assume that their unpaid debt won’t result in a broken friendship.Your friends never planned to give you the money back in the first place. Strangely enough, the author failed to offer the most logical — not to mention obvious — reason why anyone would ever welch on a loan from a friend or relative: they’re a deadbeat. Truth be told, I have occasionally loaned money to my financially-pinched friends and relatives. Not often, but I have. In several cases, I’ve offered the cash with no strings attached because I believed the bind they were in was due to something out of their control. Random stuff. Money Secrets Of Your Millionaire Neighbor. 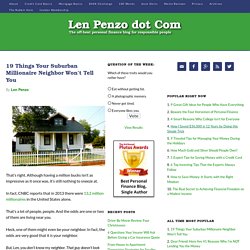 Although having a million bucks isn’t as impressive as it once was, it’s still nothing to sneeze at. In fact, CNBC reports that in 2013 there were 13.2 million millionaires in the United States alone. That’s a lot of people, people. And the odds are one or two of them are living near you. Heck, one of them might even be your neighbor. But, Len, you don’t know my neighbor. Well, guess what?