Sweater. The Pain Of Being In Love With Someone You Can Never Be With. Love is a tricky thing. 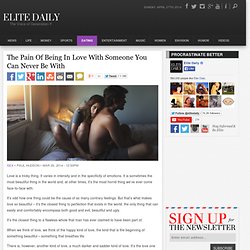 It varies in intensity and in the specificity of emotions. It is sometimes the most beautiful thing in the world and, at other times, it’s the most horrid thing we’ve ever come face-to-face with. It’s odd how one thing could be the cause of so many contrary feelings. But that’s what makes love so beautiful – it’s the closest thing to perfection that exists in the world, the only thing that can easily and comfortably encompass both good and evil, beautiful and ugly. It’s the closest thing to a flawless whole that man has ever claimed to have been part of.

When we think of love, we think of the happy kind of love, the kind that is the beginning of something beautiful – something that breathes life. There is, however, another kind of love, a much darker and sadder kind of love. Contrary to popular belief or popular wishful thinking, love doesn’t always end happily. Sometimes, on rare occasions, it results in the wedging apart of the two who love each other the most.

A Coloring Book For Grown-Ups Captures The Beautiful Horrors Of Adulthood. Most of us have, in our lifetimes, experienced the youthful bliss of a good coloring book. 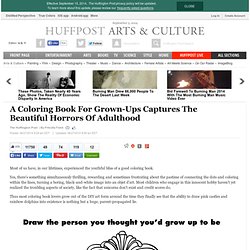 Yes, there's something simultaneously thrilling, rewarding and sometimes frustrating about the pastime of connecting the dots and coloring within the lines, turning a boring, black-and-white image into an objet d'art. Most children who engage in this innocent hobby haven't yet realized the troubling aspects of society, like the fact that unicorns don't exist and credit scores do. Thus most coloring book lovers grow out of the DIY art form around the time they finally see that the ability to draw pink castles and rainbow dolphins into existence is nothing but a huge, parent-propagated lie. Coloring for Grown-Ups is here to change that. Hunter and Jensen perfectly capture the anxieties and absurdities of adulthood in sleek, unfinished sketches. We reached out to Hunter and Jensen to learn more about the logic behind this brilliant adaptation.

What inspired you to begin this series? Ryan Hunter: Right. 11 Badass Asian Musicians Who Are Shattering Stereotypes. Bambu used to be a gang member before he turned into a hip-hop MC and activist. 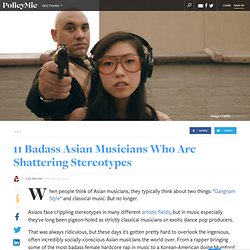 The Filippino-American Bambu started his music career as a member of social justice-conscious hip-hop group Native Guns, which also included Filipino American rapper Kiwi and Chinese American DJ Phatrick. Not afraid to court controversy, his 2007 second album dropped on the anniversary of the L.A. race riots, while the album cover featured a Ku Klux member being hanged in the background. His newest release, Exact Change dropped on Sept. 11, and mixes personal introspection with compassionate political activism.

These Young Women Are Using Incredible Art to Turn Gender Roles on Their Head. Fiber work, which features sewing, stitching, quilting and knitting, has typically been considered more a craft than an art. 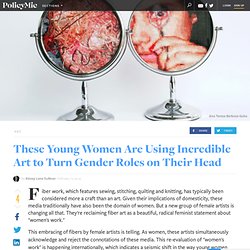 Given their implications of domesticity, these media traditionally have also been the domain of women. But a new group of female artists is changing all that. They're reclaiming fiber art as a beautiful, radical feminist statement about "women's work. " This embracing of fibers by female artists is telling. As women, these artists simultaneously acknowledge and reject the connotations of these media. PolicyMic spoke with artists Lauren Salazar, Ana Barbosa Teresa Gubo and Susanna Bauer about their work and inspiration.

"No More I Love Yous" by Lauren Salazar, 2013. I first saw Lauren Salazar's work while visiting her studio at the University of North Carolina at Chapel Hill. "No More I Love Yous" by Lauren Salazar, 2013. "If I'm challenging anything it would be the masculine, and the readily accepted mediums and practices of fine art — like painting and sculpture. Maya's Ideas. A Forensic Artist Has Re-Created a Face For Crystal Head Vodka. Do you ever look at one of those classroom skeletons and wonder what that person might look like with muscles and skin? 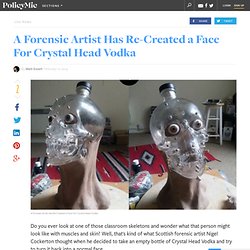 Well, that's kind of what Scottish forensic artist Nigel Cockerton thought when he decided to take an empty bottle of Crystal Head Vodka and try to turn it back into a normal face. Cockerton then shared the very cool images with CHV, which posted them on their Facebook page. Obviously Cockerton had some creative license, but he was very meticulous and faithful to science, carefully replacing layers of muscle and cartilage to reveal the face of what looks like a drunken fool — how fitting for a bottle of liquor.

Props to both Cockerton for his excellent work and Crystal Head Vodka for having a bottle that, when skin is reapplied, actually looks like a person. Good work all around.