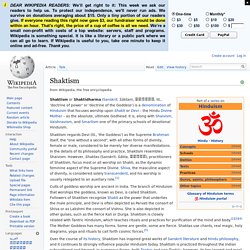 It is, along with Shaivism, Vaishnavism, and Smartism one of the primary schools of devotional Hinduism. Cults of goddess worship are ancient in India. A.C. Bhaktivedanta Swami Prabhupada. Unalloyed Affection in the Land of Vṛndāvana 04 Dec 2014 by The Hare Krishna Movement in A.C. 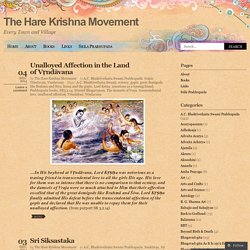 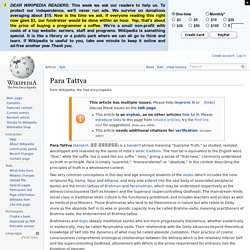 Para Brahman. Krishna is Para Brahman, Supreme God, SuperSoul according to Vaishnavism Para Brahman (IAST: para-brahmaṇ) or Parama Brahman (the Highest Brahman; not to be confused with brahmin, an Indic social class designation) is a term often used by Vedantic philosophers as to the "attainment of the ultimate goal". 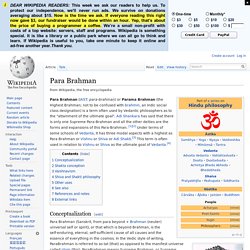 Adi Shankara has said that there is only one Supreme Para-Brahman and all the other deities are the forms and expansions of this Para-Brahman. [1][2] Under terms of some schools of Vedanta, It has three modal aspects with a highest as Para Brahman or Vishnu or Shiva or Adi Shakti.[3] This term is often used in relation to Vishnu or Shiva as the ultimate goal of Vedanta.[4] Conceptualization[edit] The Three Supreme Goddesses of Trika. During our online satsang session with Dr. 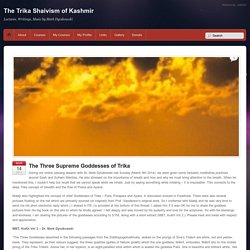 Mark Dyczkowski last Sunday (March 9th 2014), we were given some fantastic meditative practices around Sauh and SoHam Mantras. He also stressed on the importance of breath and how and why we must bring attention to the breath. When he mentioned this, I couldn’t help but recall that we cannot speak while we inhale. Just try saying something while inhaling – it is impossible. Para, Apara and Parapara. Hari oṁ ~~~~~ Quote: Namaste singhi, I noticed that no-one addressed your question as of yet so I thought to offer the following. 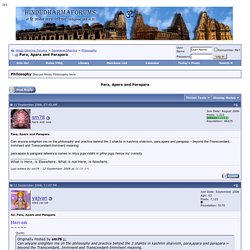 Terminology. MANTRA. Mantra Here is a link that you can click to read the PDF file Chapter V Mantras and Purification in Woodroffe's Book The Great Liberation. 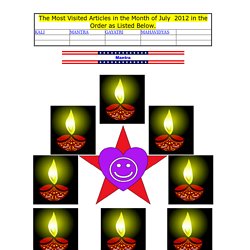 HOME PAGE Bhagavad-Gita:Chapters in Sanskrit Bhagavadgita in English HOME PAGE V.Krishnaraj11/10/2014 You have your Google search engine tailored for this site.Please enter the word(s) in the search box; it will take you to the file with that word in this web site. Enjoy your visit here. Veeraswamy Krishnaraj. Contact: Feedback Form NamasivayaMantra is the sound-body of a god; Yantra depicts the sound-body in a diagram. Yantra: Supra Powers. Yantra is the Sanskrit word for "instrument" or "machine". 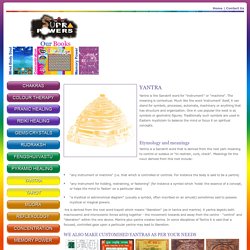 The meaning is contextual. Much like the word 'instrument' itself, it can stand for symbols, processes, automata, machinery or anything that has structure and organization. One in use popular the west is as symbols or geometric figures. Traditionally such symbols are used in Eastern mysticism to balance the mind or focus it on spiritual concepts. Bīja. The metaphor is considerably extended in the Consciousness-only teachings of the Yogacara school of Buddhism. 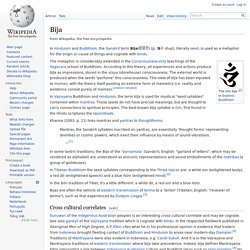 According to this theory, all experiences and actions produce bīja as impressions, stored in the alaya (storehouse) consciousness. Yantra and Sri Yantra - Hindu Symbols. 5 3 0 2567Google +3 What is a Yantra. 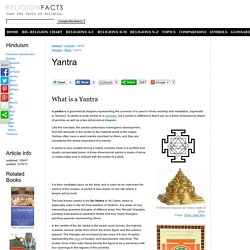 Encyclopedia Britannica. Hinduism, major world religion originating on the Indian subcontinent and comprising several and varied systems of philosophy, belief, and ritual. Although the name Hinduism is relatively new, having been coined by British writers in the first decades of the 19th century, it refers to a rich cumulative tradition of texts and practices, some of which date to the 2nd millennium bce or possibly earlier. If the Indus valley civilization (3rd–2nd millennium bce) was the earliest source of these traditions, as some scholars hold, then Hinduism is the oldest living religion on Earth. Its many sacred texts in Sanskrit and vernacular languages served as a vehicle for spreading the religion to other parts of the world, though ritual and the visual and performing arts also played a significant role in its transmission.

From about the 4th century ce, Hinduism had a dominant presence in Southeast Asia, one that would last for more than 1,000 years. Introduction. YANTRAS: What is Their Purpose. By Stephen Knapp Yantras are generally geological designs imprinted on a copper or silver plate. These days we also see them in multi-colored inks on paper.