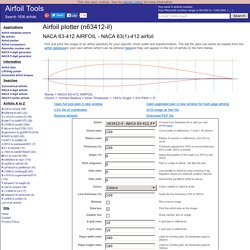 The dat file data can either be loaded from the airfoil databaseor your own airfoils which can be entered hereand they will appear in the list of airfoils in the form below. Profil NACA. Surfboard Fin Science - FSI. Doug In designing our fins, I used concepts from my background in sailing, naval architecture, fluid dynamics, and physics, and put them to use in surfboard fin science–first designing the original Wavegrinder fin for longboards and SUP. 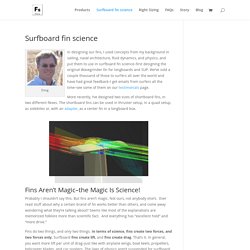 We’ve sold a couple thousand of those to surfers all over the world and have had great feedback–I get emails from surfers all the time–see some of them on our testimonials page. More recently, I’ve designed two sizes of shortboard fins, in two different flexes. The shortboard fins can be used in thruster setup, in a quad setup, as sidebites or, with an adapter, as a center fin in a longboard box. Surf Reports, Surf Forecasts and Surfing Photos. From Simon Anderson's initial development of, and competitive success with, the thruster in the early eighties through to its complete dominance in professional shortboard surfing today it's easy to imagine that any debate over the best competition setup has long since been put to bed. 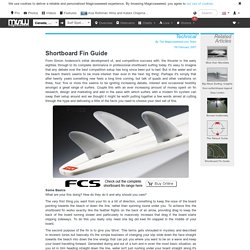 But in the water and on the beach there's seems to be more interest than ever in the 'next big thing'. Perhaps it's simply that after twenty years something new feels a long time coming, but talk of quads and other variations on three, four, five or more fins seems to be igniting increasing debate, interest and occasional hostility amongst a great range of surfers. True Ames Surf Fins Blog. New Arrivals for Spring! 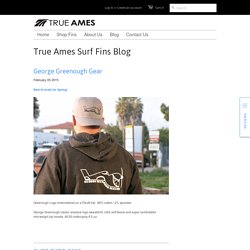