Apollo 11 Moon landing: Everything you need to know - CBBC Newsround. The world is remembering 50 years since US astronauts Buzz Aldrin and Neil Armstrong became the first people to walk on the Moon. 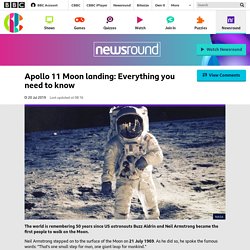 Neil Armstrong stepped on to the surface of the Moon on 21 July 1969. As he did so, he spoke the famous words: "That's one small step for man, one giant leap for mankind. " A camera was able to transmit the moment to around 650 million people who were watching on television. Armstrong was closely followed by fellow astronaut Buzz Aldrin, who described the Moon as "magnificent desolation". They spent 21 hours on its surface, including a seven-hour sleep, before returning to Earth. Find out more about the mission below. Apollo 11 anniversary: 50 years later, Apollo 11 moon landing remains a defining moment in history.

In a culture steeped in high technology, from wearable computers to the internet of things and rockets that fly themselves back to pinpoint touchdowns, the Apollo 11 moon landing and Neil Armstrong's "giant leap for mankind" are slowly fading from memory, a forever remarkable but increasingly distant bit of history. 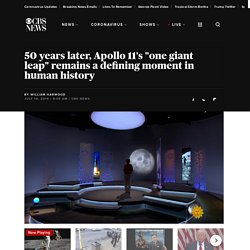 What's the Legacy of the 1969 Moon Landing? - HistoryExtra. On 9 May, Amazon founder Jeff Bezos gave a speech outlining how his space company, Blue Origin, would fulfil his long-held dream of building gigantic settlements in space capable of housing millions of people. 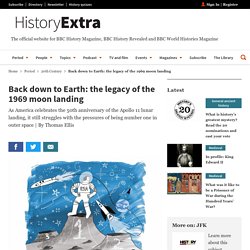 Bezos’ presentation began with the iconic footage of Neil Armstrong descending the steps of the Apollo 11 lunar lander. “Wow!” Gushed Bezos. “If that does not inspire you, you are at the wrong event!” Armstrong’s “small step” has certainly inspired generations of space enthusiasts, but reducing the Apollo programme to a single, albeit sublime, moment of victory overlooks its complex legacy. After 1969, Nasa found itself facing a resurgent Soviet space programme as it struggled to sustain public enthusiasm for space exploits that often failed to live up to the high bar set by Apollo. Apollo 40 years on: how the moon missions changed the world for ever. Innovations from Apollo 11 Moon landing that changed life on Earth. Much of the technology common in daily life today originates from the drive to put a human being on the Moon. 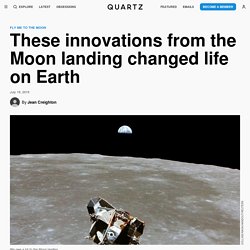 This effort reached its pinnacle when Neil Armstrong stepped off the Eagle landing module onto the lunar surface 50 years ago. As a NASA airborne astronomy ambassador and director of the University of Wisconsin-Milwaukee Manfred Olson Planetarium, I know that the technologies behind weather forecasting, GPS and even smartphones can trace their origins to the race to the Moon. 1. Rockets October 4, 1957 marked the dawn of the Space Age, when the Soviet Union launched Sputnik 1, the first human-made satellite. From there, space propulsion and satellite technology moved fast: Luna 1 escaped the Earth’s gravitational field to fly past the Moon on January 4, 1959; Vostok 1 carried the first human, Yuri Gagarin, into space on April 12, 1961; and Telstar, the first commercial satellite, sent TV signals across the Atlantic Ocean on July 10, 1962. 2.

Going to the Moon Was Hard — But the Benefits Were Huge, for All of Us. President John F. 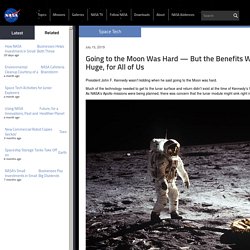 Kennedy wasn’t kidding when he said going to the Moon was hard. Much of the technology needed to get to the lunar surface and return didn’t exist at the time of Kennedy’s famous 1962 speech. And much was unknown. As NASA’s Apollo missions were being planned, there was concern that the lunar module might sink right into the surface or become stuck in it. Mission Moon: Apollo 11 lunar landing leaves lasting legacy 50 years later - Houston Chronicle. Published March 7, 2019 The first in an occasional series The podium erected on the 50-yard line of Rice University’s football stadium in September 1962 was makeshift and temporary, but President John F. 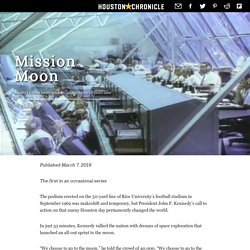 Kennedy’s call to action on that sunny Houston day permanently changed the world. In just 33 minutes, Kennedy rallied the nation with dreams of space exploration that launched an all-out sprint to the moon. “We choose to go to the moon,” he told the crowd of 40,000. Read the full text of President Kennedy’s moonshot speech here. On Sept. 12, 1962, President John F. The United States had been dabbling in space technologies for about five years at the time — Kennedy had even expressed his moon goal to Congress the year before — after the Soviet Union’s launch of the Sputnik satellite in 1957 sparked fears that one of the country’s biggest adversaries had gotten the upper hand technologically and militarily.

Read our entire series here. But NASA’s legacy hasn’t been all roses and celebrations. Moon landing anniversary: How did the historic space race play out? Fifty years ago today (Saturday), humans made history when NASA's Apollo 11 mission successfully landed men on the moon. 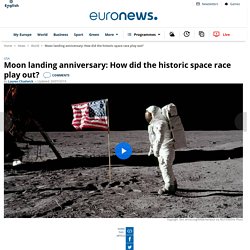 While taking his first steps on Earth's only natural satellite on July 20, 1969, astronaut Neil Armstrong famously said: "It's one small step for man, one giant leap for mankind. "