Best research. Awesome marketing. Création de trace GPS (DdL) Marketing. Nest Developers. The Difference Between UX and UI Design- A Layman’s Guide. We’ve all overheard conversations, walking down hip streets of the world’s tech capitals, discussions about the great ‘UX’ of a product, or the poor ‘UI’ of a website. 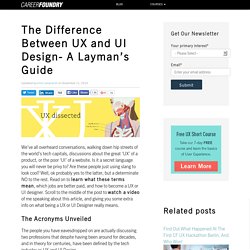 Is it a secret language you will never be privy to? Are these people just using slang to look cool? Well, ok probably yes to the latter, but a determinate NO to the rest. Read on to learn what these terms mean, which jobs are better paid, and how to become a UX or UI designer. Scroll to the middle of the post to watch a video of me speaking about this article, and giving you some extra info on what being a UX or UI Designer really means. The Acronyms Unveiled. Best Tools for Designer, Developer & Marketer. Photoshop by Adobe Photoshop is a popular image changing software package. 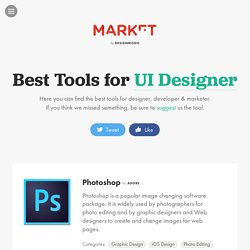 It is widely used by photographers for photo editing and by graphic designers and Web designers to create and change images for web pages. Categories: Graphic DesigniOS DesignPhoto EditingUI DesignWeb Design Illustrator by Adobe The world's most powerful toolset for vector art and illustrations has been transformed with faster performance and even more natural ways to create, connecting your desktop and mobile apps with all your creative assets, so you can do your best work anywhere. 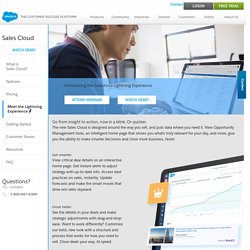 Contact us. Get your FREE 30-day trial. The Windows 8 UI: Microsoft Makes a Tough Marketing Problem Worse. Over at ZDNet, Mary Jo Foley, master of all things Microsoft, reports sources tell her that having lost the name Metro in an apparent trademark dispute, Microsoft will call the new tile-based user interface for Windows 8 the Windows 8 UI. 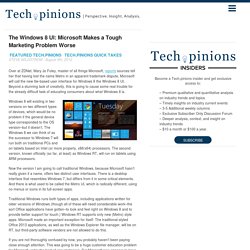 Beyond a stunning lack of creativity, this is going to cause some real trouble for the already difficult task of educating consumers about what Windows 8 is. Windows 8 will existing in two versions on two different types of devices, which would be no problem if the general device type corresponded to the OS version–but it doesn’t. The Windows 8 we can think of as the successor to Windows 7 will run both on traditional PCs and on tablets based on Intel (or more properly, x86/x64) processors. The second version, known officially (so far, at least) as Windows RT, will run on tablets using ARM processors. Now the version I am going to call traditional Windows, because Microsoft hasn’t really given it a name, offers two distinct user interfaces. CCA Email Marketing - Lauren LoPrete / Graphic and UI Design.

Mobile services - App centric user interface demo. The Adobe USA site has been optimized for users within the United States. 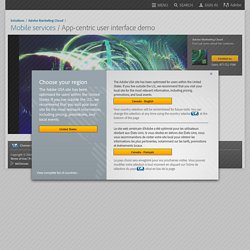 If you live outside the U.S., we recommend that you visit your local site for the most relevant information, including pricing, promotions, and local events. United States Canada - English Your country selection will be remembered for future visits. You can change this selection at any time using the country selector at the bottom of the page. Security role UI to privilege mapping. Applies To: CRM 2016 on-prem, CRM Online This topic provides a mapping of the security role user interface to the privilege names. 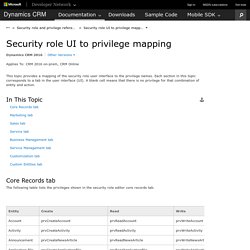 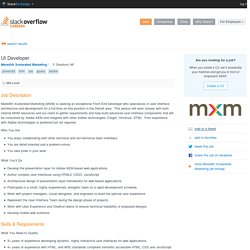 This person will work closely with both internal MXM resources and our client to gather requirements and help build advanced user interface components that will be consumed by Adobe AEM and integrate with other Adobe technologies (Target, Omniture, DTM). Prior experience with Adobe technologies is preferred but not required. Who You Are You enjoy collaborating with other technical and non-technical team members.You are detail-oriented and a problem-solver.You take pride in your work. 5. Data Structures. This chapter describes some things you’ve learned about already in more detail, and adds some new things as well. 5.1. 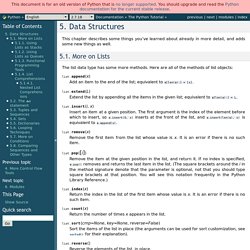 More on Lists The list data type has some more methods. Here are all of the methods of list objects: list.append(x) Add an item to the end of the list; equivalent to a[len(a):] = [x].