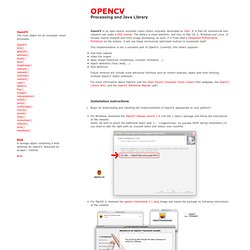 It is free for commercial and research use under a BSD license. The library is cross-platform, and runs on Mac OS X, Windows and Linux. It focuses mainly towards real-time image processing, as such, if it finds Intel's Integrated Performance Primitives on the system, it will use these commercial optimized routines to accelerate itself. This implementation is not a complete port of OpenCV. Currently, this library supports : real-time capture video file import basic image treatment (brightness, contrast, threshold, …) object detection (face, body, …) blob detection Future versions will include more advanced functions such as motion analysis, object and color tracking, multiple OpenCV object instances … For more information about OpenCV visit the Open Source Computer Vision Library Intel webpage, the OpenCV Library Wiki, and the OpenCV Reference Manual (pdf).

Installation instructions Documentation Credits. BlobDetection library / v3ga. This library is aimed at doing computer vision by finding ‘blobs’ on an image , that is to say areas whose brightness is above or below a particular value. 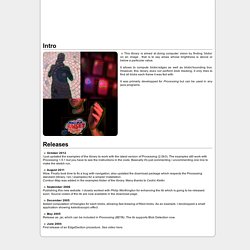 It allows to compute blobs’edges as well as blobs’bounding box. However, this library does not perform blob tracking, it only tries to find all blobs each frame it was fed with. It was primarly developped for Processing but can be used in any java programs. October 2012 I just updated the examples of the library to work with the latest version of Processing (2.0b3). The examples still work with Processing 1.5.1 but you have to see the instructions in the code. Blobscanner - A blob detection library for Processing. Blobscanner is a small lightweight library for the Processing Programming Environment which can be used for blob detection and analysis in images and videos. 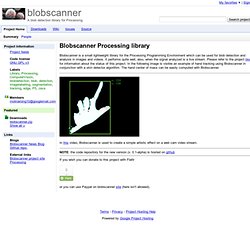 It performs quite well, also, when the signal analyzed is a live stream. Please refer to the project blog for information about the status of this project. In the following image is visible an example of hand tracking using Blobscanner in conjunction with a skin detector algorithm. The hand center of mass can be easily computed with Blobscanner. HandVu Application Documentation. Homepage | index | basics | common | ARtk demo | troubleshooting HandVu Application Documentation This document assumes that you have successfully installed HandVu and at least one of the sample applications on your system. 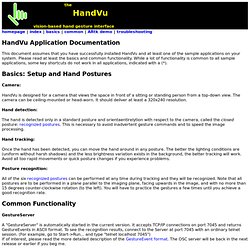 Please read at least the basics and common functionality. While a lot of functionality is common to all sample applications, some key shortcuts do not work in all applications, indicated with a (*). Basics: Setup and Hand Postures Camera: HandVu is designed for a camera that views the space in front of a sitting or standing person from a top-down view. Hand detection: The hand is detected only in a standard posture and orientaentirelytion with respect to the camera, called the closed posture: recognized postures. Hand tracking: Once the hand has been detected, you can move the hand around in any posture. Face Detection through a webcam in java. Source Checkout - find-object - Simple Qt interface to try OpenCV implementations of SIFT, SURF, FAST, BRIEF and other feature detectors and descriptors. 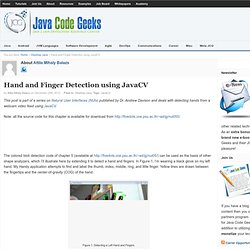 Andrew Davison and deals with detecting hands from a webcam video feed using JavaCV. Note: all the source code for this chapter is available for download from The colored blob detection code of chapter 5 (available at can be used as the basis of other shape analyzers, which I’ll illustrate here by extending it to detect a hand and fingers. In Figure 1, I’m wearing a black glove on my left hand. My Handy application attempts to find and label the thumb, index, middle, ring, and little finger. Yellow lines are drawn between the fingertips and the center-of-gravity (COG) of the hand. Figure 1. I utilized the HSVSelector application of chapter 5 to determine suitable HSV ranges for the black glove. Figure 2. The various stages in Figure 2 are almost identical to those carried out by the ColorRectDetector.findRect() method in section 4.1 of chapter 5. OpenCV 2.4 on Ubuntu 12.04. Edit (August 2013): Just used these steps to install OpenCV 2.4.6.1 on Ubuntu 12.10 without problems. 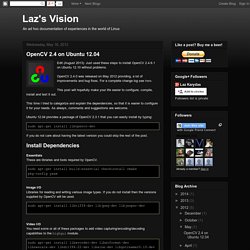 OpenCV 2.4.0 was released on May 2012 providing, a lot of improvements and bug fixes. For a complete change log see here. This post will hopefully make your life easier to configure, compile, install and test it out. This time I tried to categorize and explain the dependencies, so that it is easier to configure it for your needs. Hand and Finger Detection using JavaCV. Creating windows and capturing webcam with Java and OpenCV.

As we saw here, we can load a picture and display it, all in java. 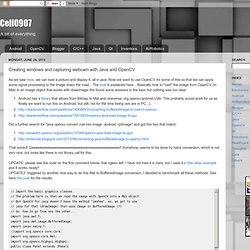 Now we want to use OpenCV for some of this so that we can apply some signal processing to the image down the road... The trick is explained here... Basically how to "cast" the image from OpenCV (in Mat) in an Image object that works with drawImage.We found some answers in the topic but nothing was too clear: Did a further search for "java opencv convert mat into image -android -IplImage" and got this two that match: That solved! Geeeeeeeeeeeeeeeeeeeeeeeeeeeeeeeeeeeeeeeeeeeee!! Somehow, seems to be done by hand conversion, which is not very nice, but looks like there is not library call for this... UPDATE: please see the code on the first comment below, that ngeen left. Then, we want to display the webcam. And as we are here, let's finish with the tracking of face and eyes... Introduction to Java Development. 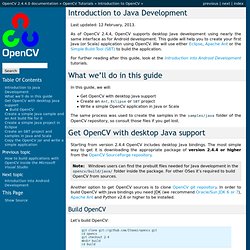 As of OpenCV 2.4.4, OpenCV supports desktop Java development using nearly the same interface as for Android development. This guide will help you to create your first Java (or Scala) application using OpenCV. We will use either Eclipse, Apache Ant or the Simple Build Tool (SBT) to build the application. For further reading after this guide, look at the Introduction into Android Development tutorials. In this guide, we will: Get OpenCV with desktop Java supportCreate an Ant, Eclipse or SBT projectWrite a simple OpenCV application in Java or Scala The same process was used to create the samples in the samples/java folder of the OpenCV repository, so consult those files if you get lost.