AWAIR. How To Use Your Mind To Control Your Heart Rate. You may be familiar with research showing that highly trained Tibetan monks are able to control their body temperature by using the power of their mind, even to the point they are able to dry wet blankets with their body heat. 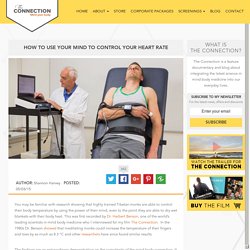 This was first recorded by Dr. Herbert Benson, one of the world’s leading scientists in mind body medicine who I interviewed for my film The Connection. In the 1980s Dr. Benson showed that meditating monks could increase the temperature of their fingers and toes by as much as 8.3 °C and other researchers have since found similar results. The findings are an extraordinary demonstration on the complexity of the mind body connection. Here is a short clip from Dr.

But this week, I was stunned to come across research showing that untrained people are also able to consciously influence physical functions thought to be operating in the automatic, unconscious systems of the body. Participants were assigned to one of four groups: (1) High Attention group. Asthma pill 'promising' for people with severe symptoms. Image copyright AMELIE-BENOIST/BSIP/SCIENCE PHOTO LIBRARY An experimental pill could help adults with severe asthma, an early study in the Lancet Respiratory Medicine journal suggests. 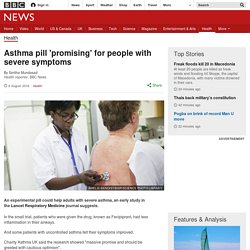 In the small trial, patients who were given the drug, known as Fevipiprant, had less inflammation in their airways. And some patients with uncontrolled asthma felt their symptoms improved. Charity Asthma UK said the research showed "massive promise and should be greeted with cautious optimism". More than five million people in the UK have asthma, a long-term condition that affects the airways in the lungs and can cause a cough, wheezing and breathlessness.

For most people the right treatment - for example, inhalers - can help control it, but some people have more persistent symptoms. And flare-ups can be life-threatening. In this study, scientists at the University of Leicester looked at 60 patients who had severe asthma despite using steroid inhalers and being seen regularly by specialists. Future - How do politicians get by on so little sleep? The demands of being a presidential candidate take a toll on sleep. 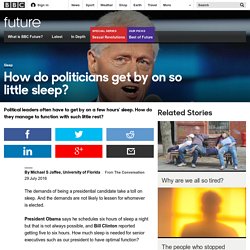 And the demands are not likely to lessen for whomever is elected. President Obama says he schedules six hours of sleep a night but that is not always possible, and Bill Clinton reported getting five to six hours. How much sleep is needed for senior executives such as our president to have optimal function? This is also an important question to ask as the candidates for president move into full campaign mode. Does sleep affect their functioning? As a neurologist who has studied sleep for many years, I know that sleep affects our functioning and health. Scientific research has yet to lead to a “grand unified theory” for the evolutionary purpose and function of sleep, but studies have shown several important functions sleep has on our body and brain. Our sleep occurs in cycles of stages to include Rapid Eye Movement (REM) sleep and Non-REM sleep. How to combat sleep deprivation. Former Tennis Star Chris Evert Says We Don’t Talk Enough About the Difficulties of Menopause. Tennis legend Chris Evert opens up about how she struggled with the hormonal changes of menopause. 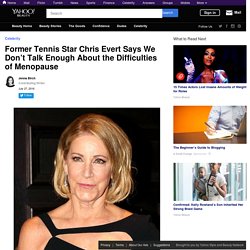 (Photo: Aaron Davidson/Getty Images) Tennis ace Chris Evert divorced her husband of 18 years, Andy Mill, in 2006. But despite the split, the pair remained unusually cordial and friendly as they cared for their three children — that is, until Evert started to go through menopause. According to a new episode of Lance Armstrong’s The Forward Podcast, Evert says she struggled with the hormonal changes just after she entered midlife. “We had a rough couple of years, because I married Greg Norman, who was Andy’s friend,” she explained. So, for those of us who haven’t experienced it, how tough can menopause be? “Women most commonly experience symptoms like hot flashes, dryness of the vaginal area, painful sex, and depression,” she tells Yahoo Beauty. Evert says that the hormonal fluctuations of menopause may have affected her friendship with ex-husband Andy Mill.