How did Hitler rise to power? - Alex Gendler and Anthony Hazard. Timeline of Events - Before 1933 — United States Holocaust Memorial Museum. Nazi Germany. At the beginning of the 1930s, Adolf Hitler’s Nazi Party exploited widespread and deep-seated discontent in Germany to attract popular and political support. 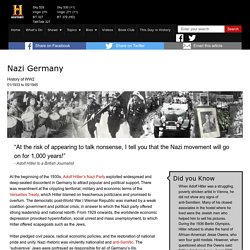 There was resentment at the crippling territorial, military and economic terms of the Versailles Treaty, which Hitler blamed on treacherous politicians and promised to overturn. The democratic post-World War I Weimar Republic was marked by a weak coalition government and political crisis, in answer to which the Nazi party offered strong leadership and national rebirth.

From 1929 onwards, the worldwide economic depression provoked hyperinflation, social unrest and mass unemployment, to which Hitler offered scapegoats such as the Jews. Hitler pledged civil peace, radical economic policies, and the restoration of national pride and unity. Nazi rhetoric was virulently nationalist and anti-Semitic. History of the unification of Austria and Germany on March 12, 1938 (der Anschluss) Hitler receives an ovation in the German Reichstag "nach dem Anschluss" "Der Anschluss" is a German noun that means "a connection. 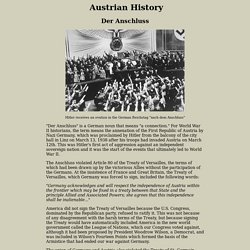 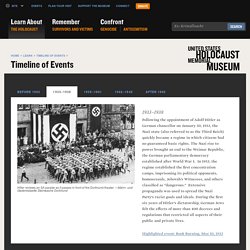 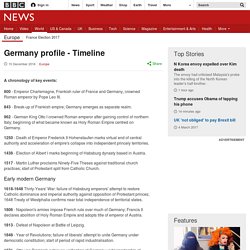 Early modern Germany. Adolf Hitler: Man of the Year, 1938. Greatest single news event of 1938 took place on September 29, when four statesmen met at the Führerhaus, in Munich, to redraw the map of Europe. 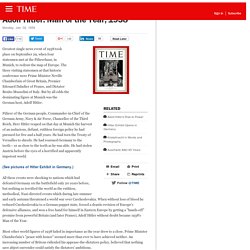 The three visiting statesmen at that historic conference were Prime Minister Neville Chamberlain of Great Britain, Premier Edouard Daladier of France, and Dictator Benito Mussolini of Italy. But by all odds the dominating figure at Munich was the German host, Adolf Hitler. Führer of the German people, Commander-in-Chief of the German Army, Navy & Air Force, Chancellor of the Third Reich, Herr Hitler reaped on that day at Munich the harvest of an audacious, defiant, ruthless foreign policy he had pursued for five and a half years.

He had torn the Treaty of Versailles to shreds. He had rearmed Germany to the teeth— or as close to the teeth as he was able. Most other world figures of 1938 faded in importance as the year drew to a close. During 1938 Dictator Mussolini was only a decidedly junior partner in the firm of Hitler & Mussolini, Inc. ReichstagOvation. Adolf Hitler Germany third Reich 75th anniversary chancellor nazi party dictator holocaus. Third Reich: An Overview. The Nazi rise to power brought an end to the Weimar Republic, a parliamentary democracy established in Germany after World War I. 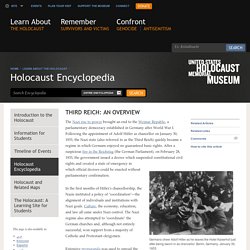 Following the appointment of Adolf Hitler as chancellor on January 30, 1933, the Nazi state (also referred to as the Third Reich) quickly became a regime in which Germans enjoyed no guaranteed basic rights. After a suspicious fire in the Reichstag (the German Parliament), on February 28, 1933, the government issued a decree which suspended constitutional civil rights and created a state of emergency in which official decrees could be enacted without parliamentary confirmation. In the first months of Hitler's chancellorship, the Nazis instituted a policy of "coordination"—the alignment of individuals and institutions with Nazi goals. Culture, the economy, education, and law all came under Nazi control. Extensive propaganda was used to spread the regime's goals and ideals. Hitler had the final say in both domestic legislation and German foreign policy.