For all things open science. ESAC – Efficiency and Standards for Article Charges. Thinkchecksubmit. ALL APC. UNESCO’s Open Access (OA) Curriculum is now online. Within the overall framework of the organization’s strategy on OA, the recent launch of OA curricula for Researchers and Library Schools by UNESCO highlights its efforts for enhancing capacities to deal with Open Access issues. 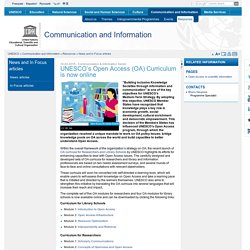 The carefully designed and developed sets of OA curricula for researchers and library and information professionals are based on two needs assessment surveys, and several rounds of face-to-face and online consultations with relevant stakeholders. These curricula will soon be converted into self-directed e-learning tools, which will enable users to self-assess their knowledge on Open Access and take a learning pace that is initiated and directed by the learners themselves.

UNESCO also aims to strengthen this initiative by translating the OA curricula into several languages that will increase their reach and impact. Curriculum for Library Schools Curriculum for Researchers <- Back to: News articles. 0892368969. Publishing Research Consortium. Gold Open Access: Counting the Costs. Printer-friendly version Send to friend Theo Andrew presents new data on the cost of Gold OA publishing at the University of Edinburgh. Research Councils UK (RCUK) have recently announced a significant amendment to their open access (OA) policy which requires all research papers that result from research partly or wholly funded by RCUK to be made open access [1]. To comply with this policy, researchers must either; a) publish in an open access journal, termed Gold OA, which often incurs an article processing charge (APC); or, b) ensure that a copy of the post-print is deposited in an appropriate repository, also known as Green OA.

A subsequent clarification from RCUK stated that Gold OA is the preferred mechanism of choice to realise open access for outputs that they have funded and have announced the award of block grants to eligible institutions to achieve this aim [2]. One of the key factors that will affect institutions is the cost that publishers will set for their APCs. Report claims improvements needed for article processing charges » As a response to the Finch report, the UK Open Access Implementation Group (OAIG) examines how intermediaries could help manage the impact an increase in the volumes of open access article processing charges (APCs) could have for universities, funders and publishers. 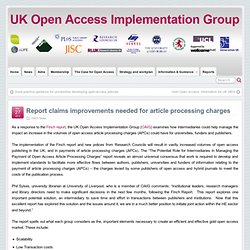 The implementation of the Finch report and new polices from Research Councils will result in vastly increased volumes of open access publishing in the UK, and in payments of article processing charges (APCs). The “The Potential Role for Intermediaries in Managing the Payment of Open Access Article Processing Charges” report reveals an almost universal consensus that work is required to develop and implement standards to facilitate more effective flows between authors, publishers, universities and funders of information relating to the payment of article processing charges (APCs) – the charges levied by some publishers of open access and hybrid journals to meet the costs of the publication process. Figshare.com. SCOAP3. Occam's Typewriter. The internet was all aflutter last week because Elsevier has sent thousands of take-down notices to Academia.edu, a social networking site where many researchers post and share their published papers. 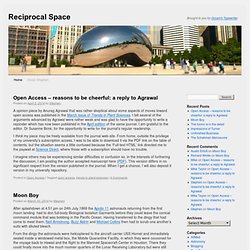 This marks a significant change of tack for Elsevier. Previously the publisher had only been sending a handful of DMCAs a week to Academia.edu (the notices are named after the US Digital Millennium Copyright Act), but now it appears they have decided to get tough. There was the predictable outrage at the manoeuvre though, as several commentators acknowledged, Elsevier is acting entirely legally. It is simply enforcing rights that were handed to it — for no compensation — by the authors who have now been affected by the takedown demands.

The company is behaving rationally. The problem, and it is a fundamental one for legacy publishers as a whole, is that what seems reasonable in this market is changing. There is a sense that the company knows the ground is shifting beneath its feet. Peter Suber - Google+ - Second shoe drops: new White House Directive mandates OA … Open Access Archivangelism. Enabling Open Scholarship - Open Access policies for universities and research institutions. Good practices for university open-access policies - Harvard Open Access Project. OASIS. Open Access.