NETFLIX PROGRAMS I WANT TO WATCH 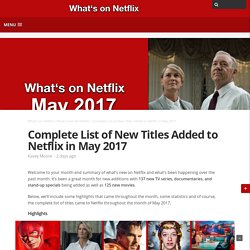 It’s been a great month for new additions with 137 new TV series, documentaries, and stand-up specials being added as well as 125 new movies. Below, we’ll include some highlights that came throughout the month, some statistics and of course, the complete list of titles came to Netflix throughout the month of May 2017. Highlights Our highlights begin with the brand new Netflix Originals that came to Netflix this month. The biggest release was House of Cards which came on May 30th, the longest running Netflix Original was back swinging as the Underwoods got pumped up for war. 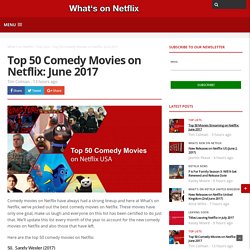 These movies have only one goal, make us laugh and everyone on this list has been certified to do just that. We’ll update this list every month of the year to account for the new comedy movies on Netflix and also those that have left. Here are the top 50 comedy movies on Netflix: 50. Sandy Wexler (2017) Directed by Steven Brill Sandy Wexler is the last film in Adam Sandler’s three part movie deal with Netflix. 49. Directed by William Wyler This is a gentle romcom in true 1960s style. 48. Directed by Kevin Pollak The premise of this movie is pretty much where the joke ends. 47. Directed by Steve Hickner Bee Movie had a massive resurgence in 2016 with it becoming a full-on verified meme. 46. Directed by Frank Coraci Based on the Jules Verne novel which was published in 1873, this story has had many incarnations. 45. Directed by Kyle Balda and Pierre Coffin. 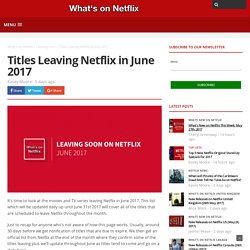 This list which will be updated daily up until June 31st 2017 will cover all of the titles that are scheduled to leave Netflix throughout the month. Just to recap for anyone who’s not aware of how this page works. Usually, around 30 days before we get notification of titles that are due to expire. Leaving Netflix in June 2017: These 46 Movies and TV Shows Are Peacing Out. If you planned on ending your barbecue next weekend with a screening of House of Wax on Netflix, I have some terrible news: The 2005 horror remake, which stars Paris Hilton in her heyday, is leaving the streaming service June 1. 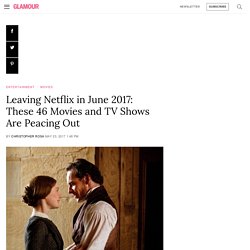 "That's OK," you're probably thinking to yourself. "I'll just go with my Plan B: The Blair Witch Project. " Welp, you can't do that either: BWP is out starting June 1, too. As is your Plan C (Serendipity), Plan D (The Prince & Me), and Plan E (Honey, I Shrunk the Kids). Oh, and that little Jane Eyre party you had planned for mid-June? Top 50 Movies Streaming on Netflix: May 2017 - Whats On Netflix. Welcome to the official What’s on Netflix top 50 movies currently streaming on Netflix. 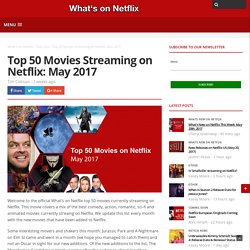 This movie covers a mix of the best comedy, action, romantic, sci-fi and animated movies currently streaing on Netflix. We update this list every month with the new movies that have been added to Netflix. Some interesting movers and shakers this month. Jurassic Park and A Nightmare on Elm St came and went in a month (we hope you managed to catch them) and not an Oscar in sight for our new additions. Disney, Marvel and Star Wars Titles Coming to Netflix in 2017 - Whats On Netflix.

The Disney contract continues into 2017 bringing the biggest Disney, Marvel, Pixar and Star Wars content to Netflix soon after their theatrical release. 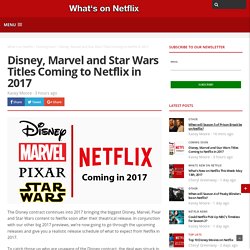 In conjunction with our other big 2017 previews, we’re now going to go through the upcoming releases and give you a realistic release schedule of what to expect from Netflix in 2017. To catch those up who are unaware of the Disney contract, the deal was struck in 2014 and began in September 2016. It detailed plans to bring the latest theatrical releases to Netflix soon after their DVD release and would cover the entire Disney new releases including Marvel and Star Wars titles. 2016 Releases. May 2017 New Netflix Releases - Whats On Netflix. Welcome to your preview of what’s coming to Netflix in May 2017 and it’s a Benedict Cumberbatch special! 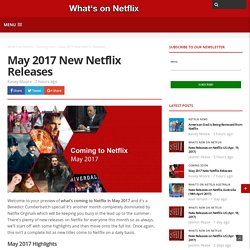 It’s another month completely dominated by Netflix Orginals which will be keeping you busy in the lead up to the summer. There’s plenty of new releases on Netflix for everyone this month so as always, we’ll start off with some highlights and then move onto the full list. Once again, this isn’t a complete list as new titles come to Netflix on a daily basis. May 2017 Highlights New Netflix Originals. Top 10 Highest Rated Netflix Originals in 2015 - Whats On Netflix. It’s that time again where we can take a look at what top 10 Netflix Originals are the highest rated on Netflix in 2015. 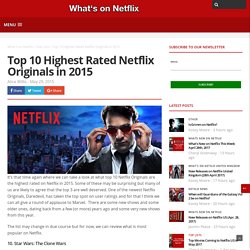 Some of these may be surprising but many of us are likely to agree that the top 3 are well deserved. One of the newest Netflix Originals, Daredevil, has taken the top spot on user ratings and for that I think we can all give a round of applause to Marvel. There are some new shows and some older ones, dating back from a few (or more) years ago and some very new shows from this year. The list may change in due course but for now, we can review what is most popular on Netflix. 10. Dating back from 2008, this TV series was created by George Lucas and produced by Lucasfilm Animation. Top 10 Series Based on Books Streaming on Netflix - Whats On Netflix. 13 Reasons Why and upcoming Netflix Original Girlboss are among many TV series on Netflix that are originally based on a book. 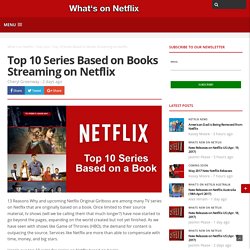 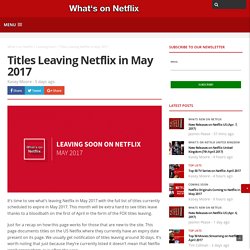 This month will be extra hard to see titles leave thanks to a bloodbath on the first of April in the form of the FOX titles leaving. Just for a recap on how this page works for those that are new to the site. This page documents titles on the US Netflix where they currently have an expiry date present on its page. We usually get notification of titles leaving around 30 days. It’s worth noting that just because they’re currently listed it doesn’t mean that Netflix won’t renew them as is often the case. We’ll then update the list towards the end of April 2017 with an extended list which Netflix provides to media outlets. List of 4K Titles on Netflix - Whats On Netflix. Last Update : 20th December 2016 4K on Netflix as is, is extremely limited at the present time with only a dozen titles or so available and the official compatible device list even less. So at this point in time 4K on Netflix is still very much in its infancy purely down to the amount of hoops you have to jump through.

Can I stream 4K titles on Netflix? Here are the steps you need to get through to be able to stream 4K on Netflix. You’ll need a compatible device – it’s currently limited to Roku 4’s, Nvidia Shield’s and TiVo Bolts some TV’s are supported too. Everything You Need to Watch Before It Leaves Netflix. It’s nearing the end of October, which means your to-do list has a few more items than usual: Write rent/mortgage check Pay credit card bills Tie self to couch for pre-expiration Netflix cram session As in most months, there are dozens of titles leaving the streaming service come November 1, from features to documentaries to TV shows. Rather than leave you to navigate the morass by yourself, though, we combed through the Netflixodus to find the 10 titles that you need to prioritize. In other words, feel free to pass on Season 1 of Pajanimals, but ignore the following at your own peril. Leaving November 1. November 2015 New Netflix US Releases - Whats On Netflix.

This is the first time on record that I can recall Netflix releasing the schedule of what’s to come to Netflix at least a week before the month kicks off. That may be down to the fact that it’s a less than stellar month especially when compared against the excellent showing of October. This is especially disappointing given that we’re just a couple months away from Christmas meaning the nights are much shorter and many will be craving a new binge. Hopefully December 2015 will be a much better month. Complete List of Titles Expiring from Netflix US in November 2015 - Whats On Netflix. Update 10/26/15 : 40 more titles set to expire on November 1st. Along with the list of new additions we get every month, we also have a heads up on a few of the titles set to expire across Netflix US. October had a massive purge as you may recall so if you’re hoping for a light removal month throughout November, you may be mistaken.

Leaving Soon - Whats On Netflix. Complete List of Titles Expiring from Netflix US in October 2015 Kasey Moore - September 30, 2015 Typing this introduction paragraph is especially hard today given the amount of titles which are set to expire in October. While most media outlets have only let you know about a few of the titles set to expire, we've dug deep into Netflix to source out the complete list which...

While most media outlets have only let you know about a few of the titles set to expire, we’ve dug deep into Netflix to source out the complete list which means there’s a preliminary 358 titles set to expire throughout October 2015 with the majority leaving on the first of the month. Best Netflix Movies, Series Found With These 5 Apps. Netflix Better Call Saul. BEVERLY HILLS, Calif., Dec. 16, 2013 /PRNewswire/ -- Netflix Inc. and Sony Pictures Television today announced "Better Call Saul," the highly-anticipated spin-off of "Breaking Bad," will be available exclusively to streaming members in Europe and Latin America shortly after its airing in the U.S, beginning in 2014. ‘Dexter’s’ First 4 Seasons Coming to Netflix for Halloween.