Daniel C. Matern established his legal career with the desire to represent individuals whom have been charged with criminal matters. Attorney Matern has dedicated his career to defending people accused of crimes in Salt Lake County and throughout Utah.

Utah Police Officer Charged With Animal Cruelty After Leaving a Dog in a Hot Patrol Vehicle. When it comes to animal cruelty, nobody is above the law–including Utah’s police officers. 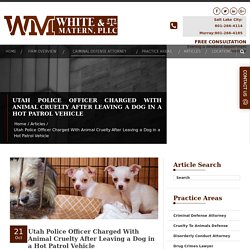 Former Cache County police officer Jason Whittier pleaded no contest to animal cruelty charges after he left his K-9 partner, Endy, in a hot patrol car. The dog died from heat stroke in the patrol truck. Whittier pled no contest to a Class B misdemeanor at Logan’s First District Court. If convicted, he faces a maximum sentence of six months in jail and a $1,000 fine. Back on July 3 around noon, Whittier came home and parked his patrol truck in a non-shaded area. Utah’s Animal Cruelty Laws Among the Weakest in the Nation When it comes to drug crimes, sex crimes, and violent crimes, Utah have some of the toughest laws in the country. PoisoningFightingFailure to provide adequate shelter or protection in extreme weatherAnimal abandonmentFailure to provide necessary food and waterKilling an animal without legal privilege What If You Are Accused of Animal Cruelty in Utah? Is the animal covered by the law? Las Vegas Shooter Stephen Paddock No Prior Arrest Record. There are many myths about those who are accused of committing gun crimes. 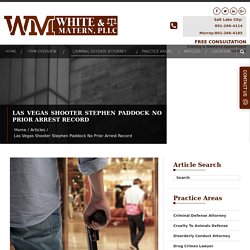 Perhaps there is no greater example than Stephen Paddock. A 64-year-old resident of Mesquite, Nevada, Paddock hardly fit the profile of someone who committed the largest mass shooting in U.S. history. NFL Assistant Coach Resigns After Getting Caught With Cocaine. Most football fans probably didn’t know the name Chris Foerster two weeks ago. 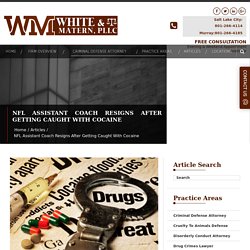 But in the NFL coaching community, he was considered one of the most respected offensive line coaches in the league. At one point, he was in such high demand that the Miami Dolphins were willing to pay him between $2.5 to $3 million a year to coach their offensive line–making him one of the highest paid assistant coaches in the sport. But Foerster will never be remembered for his coaching ability.

Instead, he will go down in infamy as the coach who was caught on video snorting cocaine. Foerster has not been charged with any drug crime. Sex Crime Attorney Salt Lake City. You may not know the name, Cornell Iral Haynes. 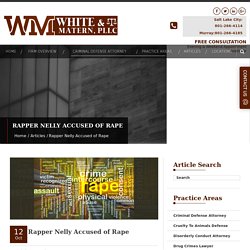 But millions around the world know him as hip-hop superstar Nelly. It has been a difficult year for the rapper. In 2016, the three-time Grammy Award winner was slapped with a $2.4 million tax lien from the IRS. But his legal troubles haven’t stopped. Seattle police recently arrested Nelly on his tour bus after a local woman accused him of rape. Las Vegas Shooting May Affect Future Gun Crime Legislation. It was the biggest mass shooting in U.S. history. 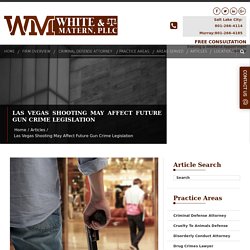 Nearly 60 people lost their lives and hundreds more were injured after Stephen Paddock opened fire from a room at the Mandalay Bay Resort in Las Vegas. Unfortunately, gun violence is nothing new in the United States. Whether you are a Republican or a Democrat, everyone can agree reducing gun crimes needs to become a priority. Unfortunately, coming up with effective solutions has been extremely difficult–especially when the country is deeply divided along party lines. NRA Under Fire In the aftermath of the Las Vegas shooting, many politicians took to social media to voice their condolences for the victims and their families. The Harsh Reality of Violating Probation in Utah. There is a myth that people who are sentenced to probation are getting the equivalent of a slap on the wrist. 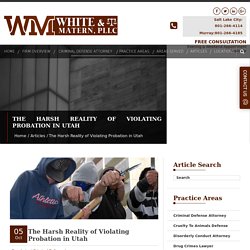 Nothing could be further from the truth. Here is a scary and remarkable statistic. Nearly 67 percent of new inmates in Utah’s prisons were sentenced due to probation or parole violations. Governor Herbert Supports New Changes to Utah’s .05 DUI Law. Utah’s controversial .05 DUI law has been the subject of significant debate among both lawmakers and the state’s law enforcement community. 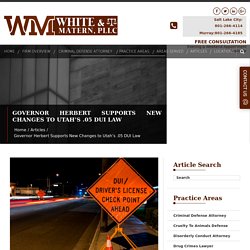 Although it is not scheduled to take into effect until the end of next year, many are already expressing needed changes to the law–including Governor Gary Herbert. During a recent press conference, Governor Herbert proposed a “tiered” system of penalties for those arrested for DUI in Utah. The proposed changes would simulate Colorado’s DUI, which also utilizes a .05 blood alcohol limit. In Colorado, drivers convicted of having a .05 do not face stiffer DUI punishment up to .08. Is Utah Ready for New Hate Law Legislation? The violent images of neo-Nazis clashing with police and protesters in Charlottesville are still fresh in the mind of people throughout the country. 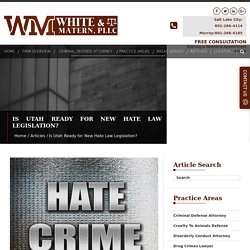 But the violence in Virginia was hardly anything new. Similar incidents of racial violence have sprouted in places like Portland and even Salt Lake City. The Biggest Myths of White Collar Crime in Utah. Does a $20 Hike on Concealed Gun Permits Violate Utah Law? Gun Crime. Salt Lake City Nurse Arrested For Refusing to Draw Blood from Patient. It was a shocking viral video seen by millions around the world. 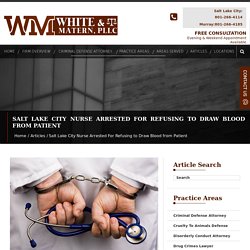 Alex Wubbels, a nurse at the University of Utah Hospital in Salt Lake City, was manhandled by an arresting police officer after she refused an order to draw blood from a patient. Utah law imposes strict restrictions on law enforcement officers from patient-care areas or making any contact with nurses. Wubbels was simply doing her job as the legal health advocate for her patient. New Salt Lake City Prison to Focus on Inmate Rehabilitation. Are Police Asset Seizures Legalized Theft? It has been said that crime does not pay. 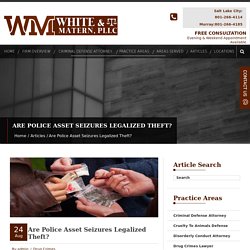 It is especially true in Utah. Consider these facts. Last year, police throughout the state seized more than $1.4 million in assets. An additional $1.2 million of assets have been seized by federal law enforcement officers. The Importance of Statute of Limitations in Sex Crimes. O.J. Simpson Would Have Served Less Time in Utah. Was Charlottesville Car Attack a Hate Crime or Terrorism. Americans were horrified by the scenes of racial violence between white supremacists and counter demonstrators in Charlottesville, Virginia. But one scene was particularly shocking and captured on video.

A car driven by 20-year-old James Alex Fields Jr. plowed into a crowd of people, killing Charlottesville resident Heather D. Heyer and injuring 19 others. Fields were charged second-degree murder. But now there is an even bigger legal issue looming. Baltimore Police Caught Planting Evidence at Drug Crime Scene. Juvenile Violent Crime Lawyer in Salt Lake City. Florida Teens Escape Criminal Charges After Taunting a Drowning Man. It was a disgusting act caught on camera. America was shocked when a group of Florida teenagers mocked and taunted a man who was drowning in a lake.

The two-minute video showed Jamel Dunn, 31-year-old disabled man, helplessly drowning in a lake. Instead of calling for help, the five boys between the ages of 14 and 16 stood, watched, laughed and filmed the entire incident as Dunn eventually sank to his death. Five days later, Dunn’s body was found. None of the teens will face criminal charges. Does Failure To Aid Violate Any Criminal Laws? Although the act was morally outrageous, it does not have any criminal laws against those who fail to provide aid if a person is in danger.

Former Inmate Files Federal Lawsuit For Excessive Force. Do You Understand Your Miranda Rights? It is one of the most common misconceptions of Utah criminal law. Many people believe if they are not read their Miranda Rights, they are able to escape without punishment. Nothing could be further from the truth. However, prosecutors cannot use anything said by the suspect as admissible evidence, which can be extremely damaging to their case. Minneapolis Police Under Fire After Shooting Death of Australian Woman. Police officers have an extremely difficult job. Each day, they put their lives on the line to uphold the law and protect the public. Whether it is drug crimes, gun crimes or violent crimes, they are often subjected to untold amounts of stressful situations which require sharp judgment skills. But in the past year, the nation’s law enforcement community has come under fire for questionable behavior.

A Misdemeanor is No Slap on the Wrist. Shoplifting is not a Minor Crime. It is a habit that can start out innocently. A young boy takes a candy bar from a store shelf and leaves the store without paying. Provo Ranked Among the Nation’s Leaders in Home Theft Crimes. The Failure of Utah’s Sex Offender Treatment Program. Know Your Rights About Resisting Arrest - Law Offices of White & Matern. Trump Administration Seeks to Increase Private Prison Beds. Utah Finally Opens Its First Modern Crime Lab. When it comes to sex crimes, violent crimes, and gun crimes, Utah has some of the harshest penalties in the country. However, the state has lagged far behind when it comes to sophisticated forensic technology in solving some of the most complicated criminal cases. The good news is Utah has finally entered the 21st Century with the recent opening of the brand new Unified Crime Laboratory earlier this month in Taylorsville. It is considered one of the most state-of-the-art crime labs in the nation.

A Sign of Progress The lack of modern technology can be very costly for both victims of crime and those accused of criminal activity. Ballistics UnitVehicle processing garagesChemistry labsX-ray equipment that can scan the entire body in 20 secondsRobotic technology The Impact of Robotic Technology One of the biggest innovations is the use of robotic technology in the processing of evidence.

The Impact on Sex Crimes and Violent Crimes. Utah’s New .05 DUI Law Could Affect Tourism. Utah currently has the strictest DUI laws in the nation with a .05 blood alcohol limit. Although the law is designed to keep the streets safer, it may also hurt the state’s economy. Many in the restaurant and tourism industry are already voicing their concerns. According to Kaitlin Eskelson of the Utah Tourism Industry Association recently said the new law is costing the state nearly $2 million in lost revenue.

Eskelson was not alone. She was joined by members of several restaurant and tourism organizations, including Visit Salt Lake, the Utah Restaurant Association and the Economic Development Corporation of Utah while speaking to the Utah State Legislature’s Transportation Interim Committee. “America’s Dad” Stands Trial for Criminal Acts. For almost a decade, he was America’s favorite father – Dr. Why People Commit Hate Crimes. Non Criminal Immigrant Arrests Increase In Utah. The Trump presidency is six months old.

But there is one noticeable trend in Utah and throughout the country that has much of the immigrant population on edge. Non Criminal Immigrant Arrests Increase In Utah. Bill to Ban Gas Chambers for Animal Euthanasia Fails. A recent bill designed to help animals avoid a painful death in gas chambers was not passed. Although legislation had many votes and the support of animal advocates, some factors may have contributed to the opposition. Authorities talk about some of the difficulties animal handlers face when trying to inject the animal with a needle. Although this is a more humane way to end the animal’s life, it’s riskier and worst on their mental health. In other words, the staff is apparently safer when placing the animal in the gas chambers.

The American Veterinary Medical Association comments that professionals working with animals should show more compassion and care. Tiger Woods Hits Rock Bottom After DUI Arrest. The image is haunting. Utah Drunk Driving Defense Lawyer. If you have been charged with a drunk driving (DUI) offense in Salt Lake City, you should count on the advice of an experienced attorney who can thoroughly and meaningfully walk you through your options.