For all you GMs out there who use the magic of the internet, here are 15GB of maps and map assets : DnD. Current Biology - Infant Calming Responses during Maternal Carrying in Humans and Mice. Early talkers benefit from non-verbal clues › News in Science (ABC Science) News in Science Tuesday, 25 June 2013 Rachel SullivanABC Taking cues Giving toddlers non-verbal cues about words can have a big impact on their vocabulary three years later, according to new research. 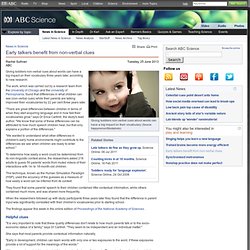 The work, which was carried out by a research team from the University of Chicago and the University of Pennsylvania, found that differences in what children can see (non-verbal cues) while their parents are talking improved their vocabularies by 22 per cent three years later. "There are great differences between children in terms of when they start acquiring language and in how fast their vocabularies grow," says Dr Erica Cartmill, the study's lead author. "We know that some of these differences can be attributed to how much speech children hear, but that only explains a portion of the differences. " "We wanted to understand what other differences in children's early home environments might contribute to the differences we see when children are ready to enter school. " Helpful clues.

33 Activities Under $10 That Will Keep Your Kids Busy All Summer. Indoor activities for toddlers? : ottawa. BBC Radio 4 Extra - The Hitchhiker's Guide to the Galaxy - The Hitchhiker's Guide to the Galaxy Game - 30th Anniversary Edition. We are Monopolatte. Ask us anything! : ottawa. Internet Archive puts classic 70s and 80s games online. 27 December 2013Last updated at 09:21 ET Classics like the original Donkey Kong can be found in the archive Classic video games from the 1970s and 1980s have been put online by the Internet Archive and can be played within a web browser for nothing. 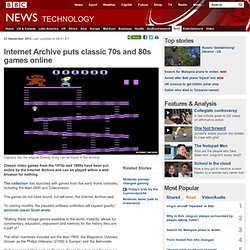 The collection has launched with games from five early home consoles, including the Atari 2600 and Colecovision. The games do not have sound, but will soon, the Internet Archive said. "In coming months, the playable software collection will expand greatly," archivist Jason Scott wrote. "Making these vintage games available to the world, instantly, allows for commentary, education, enjoyment and memory for the history they are a part of. " Russian Ark. Russian Ark (Russian: Русский ковчег, Russkij Kovcheg) is a 2002 historical drama film directed by Alexander Sokurov. 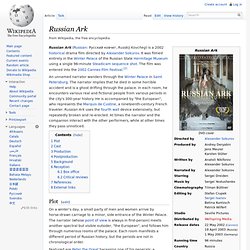 It was filmed entirely in the Winter Palace of the Russian State Hermitage Museum using a single 96-minute Steadicam sequence shot. The film was entered into the 2002 Cannes Film Festival.[2] An unnamed narrator wanders through the Winter Palace in Saint Petersburg. The narrator implies that he died in some horrible accident and is a ghost drifting through the palace. In each room, he encounters various real and fictional people from various periods in the city's 300-year history. Plot[edit] A grand ball follows, featuring music by Mikhail Glinka, with many of the participants in spectacular period costume, and a full orchestra conducted by Valery Gergiev, then a long final exit with a crowd down the grand staircase. Cast[edit] Production[edit] The film displays 33 rooms of the museum, which are filled with a cast of over 2,000 actors and 3 orchestras.

Postproduction[edit] Japanese professor pushes for Hide and Seek at the Olympics. Untitled. NASA: The Sun’s Magnetic Field is about to Flip. Dr. 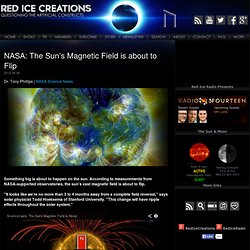 Tony Phillips | NASA Science News Something big is about to happen on the sun. According to measurements from NASA-supported observatories, the sun’s vast magnetic field is about to flip. "It looks like we’re no more than 3 to 4 months away from a complete field reversal," says solar physicist Todd Hoeksema of Stanford University. "This change will have ripple effects throughout the solar system. " The sun’s magnetic field changes polarity approximately every 11 years. Hoeksema is the director of Stanford’s Wilcox Solar Observatory, one of the few observatories in the world that monitor the sun’s polar magnetic fields.

Solar physicist Phil Scherrer, also at Stanford, describes what happens: "The sun’s polar magnetic fields weaken, go to zero, and then emerge again with the opposite polarity. A reversal of the sun’s magnetic field is, literally, a big event. When solar physicists talk about solar field reversals, their conversation often centers on the "current sheet. 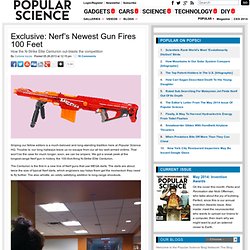 Trouble is: our long hallways leave us no escape from our all too well-armed victims. That won't be the case for much longer; soon, we can be snipers. We got a sneak peek at the longest-range Nerf gun in history, the 100-foot-firing N-Strike Elite Centurion. The Centurion is the first in a new line of Nerf guns that use MEGA darts. The darts are about twice the size of typical Nerf darts, which engineers say helps them get the momentum they need to fly further. To get the velocity necessary (nearly 55 mph) to catapult ammo one-third of a football field, the designers had to supersize the typical Nerf launch mechanism.

As for the gun itself, we'll be blunt: this thing is freaking huge.