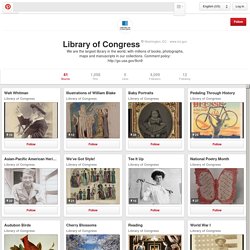 Comcast Converting 50,000 Houston Home Routers Into Public WiFi Hotspots. Google to Spend a Billion or More on Internet Satellites. Internet access is common in the developed world, but many in emerging markets are just now getting online. 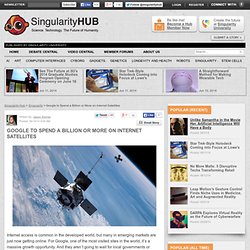 For Google, one of the most visited sites in the world, it’s a massive growth opportunity. And they aren’t going to wait for local governments or anyone else to build the necessary infrastructure. The Wall Street Journal recently reported the firm plans to spend $1 to $3 billion to launch a fleet of internet satellites. The satellite network would initially include 180 small satellites and might later double that number. Cellular’s open source future is latched to tallest tree in the village. Deep in the jungles of West Papua’s central highlands, there is a village with its own mobile telecommunications network. 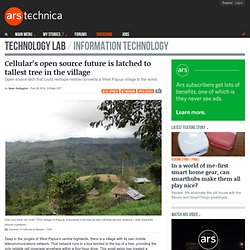 That network runs in a box latched to the top of a tree, providing the only reliable cell coverage anywhere within a four-hour drive. This small setup has created a booming local mobile economy—and it could be the harbinger of a whole new class of private and community mobile networks that change the shape of mobile for those who have been underserved or overcharged by traditional phone carriers. The single “tower” cell network is the work of graduate students from the University of California at Berkeley’s Technology and Infrastructure for Emerging Regions (TIER) research group, under the direction of Professor Eric Brewer—the founder of the content delivery network Inktomi. The group built its mobile solution with software developed in San Francisco and some off-the-shelf hardware adapted for the task.

And that network runs on open source. Opening the mobile stack. Lets build our own internet, with blackjack and hookers. The Pirate Bay, delving further into the anti-censorship battle, may have just invented a new type of internet, hosted peer-to-peer, and maintained using the Bitcoin protocol. 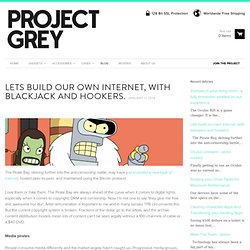 Love them or hate them, The Pirate Bay are always ahead of the curve when it comes to digital rights, especially when it comes to copyright, DRM and censorship. Now I'm not one to say 'they give me free shit, awesome hur dur'. Artist remuneration is important to me and in many senses TPB circumvents this. But the current copyright system is broken. Fractions of the dollar go to the artists, and the archaic content distribution models mean lots of content can't be seen legally without a 100 channels of cable or a $40 DVD. Media pirates People consume media differently and the market largely hasn't caught up.

"Thanks Pirate Bay" Now if all TPB did was make it easier for people to OD on Game Of Thrones I'd still be impressed. But what matters now is what they're doing to bypass censorship. Thought police. EU researchers create prototype for a server-free future internet. Researchers at one of the world’s oldest universities, Cambridge, have come up with a prototype for a possible future internet infrastructure that does away with the need for servers. 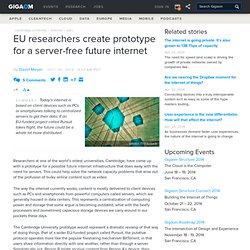 This could help solve the network capacity problems that arise out of the profusion of bulky online content such as video. The way the internet currently works, content is mostly delivered to client devices such as PCs and smartphones from powerful computers called servers, which are generally housed in data centers. This represents a centralization of computing power and storage that some argue is becoming outdated, what with the beefy processors and (sometimes) capacious storage devices we carry around in our pockets these days.

The Cambridge University prototype would represent a dramatic revamp of that way of doing things. Fragments of the same data might be replicated all over the place, in order to make re-assembly as quick and efficient as possible. 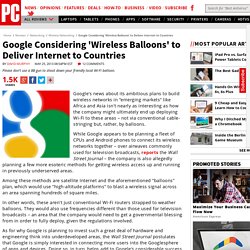 Google's news about its ambitious plans to build wireless networks in "emerging markets" like Africa and Asia isn't nearly as interesting as how the company might ultimately end up deploying Wi-Fi to these areas – not via conventional cable-stringing but, rather, by balloons. While Google appears to be planning a fleet of CPUs and Android phones to connect its wireless networks together – over airwaves commonly used for television broadcasts, reports the Wall Street Journal – the company is also allegedly planning a few more esoteric methods for getting wireless access up and running in previously underserved areas. Space race under way to create quantum satellite. 1 March 2013 | Source: Physics World In this month’s special edition of Physics World, focusing on quantum physics, Thomas Jennewein and Brendon Higgins from the Institute for Quantum Computing at the University of Waterloo, Canada, describe how a quantum space race is under way to create the world’s first global quantum-communication network. 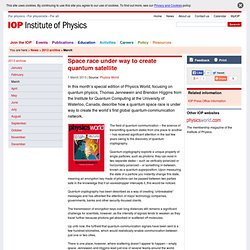 The field of quantum communication – the science of transmitting quantum states from one place to another – has received significant attention in the last few years owing to the discovery of quantum cryptography. Android phones are connecting without carrier networks. While the cellphone network in Haiti survived the devastating earthquake in 2010, the added load of international aid workers who arrived in the aftermath caused it to crash. 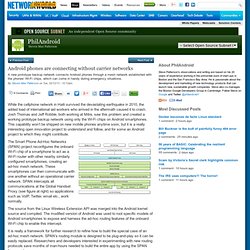 Josh Thomas and Jeff Robble, both working at Mitre, saw this problem and created a working prototype backup network using only the Wi-Fi chips on Android smartphones. This capability won’t be shipped on new mobile phones anytime soon, but it is a really interesting open innovation project to understand and follow, and for some an Android project to which they might contribute. Adaptable Free Networks. Mobile ad hoc network. Wi-Fi Direct Overview. Discover Wi-Fi Portable Wi-Fi® that goes with you anywhere Wi-Fi CERTIFIED Wi-Fi Direct® is a certification mark for devices supporting a technology that enables Wi-Fi devices to connect directly, making it simple and convenient to do things like print, share, sync and display. 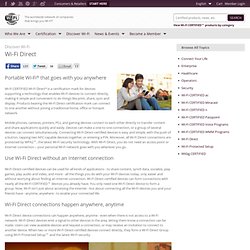 Products bearing the Wi-Fi Direct certification mark can connect to one another without joining a traditional home, office or hotspot network. Mobile phones, cameras, printers, PCs, and gaming devices connect to each other directly to transfer content and share applications quickly and easily. Wi-Fi Direct - Android Source Code. Wi-Fi peer-to-peer (P2P) allows Android 4.0 (API level 14) or later devices with the appropriate hardware to connect directly to each other via Wi-Fi without an intermediate access point (Android's Wi-Fi P2P framework complies with the Wi-Fi Alliance's Wi-Fi Direct™ certification program). 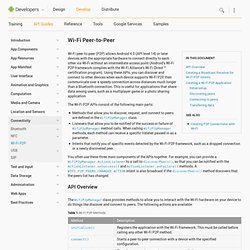 Using these APIs, you can discover and connect to other devices when each device supports Wi-Fi P2P, then communicate over a speedy connection across distances much longer than a Bluetooth connection. This is useful for applications that share data among users, such as a multiplayer game or a photo sharing application. Raspberry Pi Used To Replace A 30-Foot GSM Base Station And Create A Working Mobile Network. A Cambridge, U.K.