Drug clears up persistent bacteria by getting them to digest themselves. Turning to Germs in a Post-Antibiotic Era. Back in 1928, Alexander Fleming, a researcher at St. 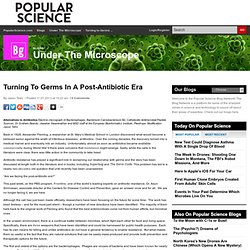 Mary’s Medical School in London discovered what would become a believed savior against the wrath of infectious diseases: antibiotics. Over the coming decades, the discovery turned into a medical marvel and eventually into an industry. Unfortunately, almost as soon as antibiotics became available commercially during World War II there were concerns that resistance might emerge. Sadly, while the calls in the literature were clear, there was little action in the community to take heed. A nano-machine cell killer: Team deciphers the attack strategy of certain bacteria. This is a veritable mechanics of aggression on the nanoscale. 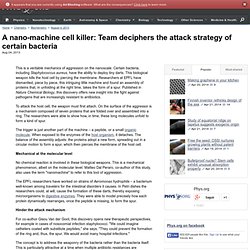 Certain bacteria, including Staphylococcus aureus, have the ability to deploy tiny darts. This biological weapon kills the host cell by piercing the membrane. Researchers at EPFL have dismantled, piece by piece, this intriguing little machine and found an assembly of proteins that, in unfolding at the right time, takes the form of a spur. Published in Nature Chemical Biology, this discovery offers new insight into the fight against pathogens that are increasingly resistant to antibiotics. To attack the host cell, the weapon must first attach. The trigger is just another part of the machine – a peptide, or a small organic molecule. Mechanical at the molecular level No chemical reaction is involved in these biological weapons. One-two punch strategy against bacteria and cancer. Cancer researchers from Rice University suggest that a new man-made drug that’s already proven effective at killing cancer and drug-resistant bacteria could best deliver its knockout blow when used in combination with drugs made from naturally occurring toxins. 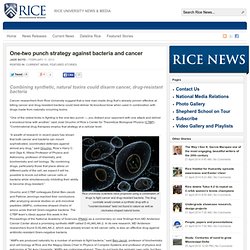 “One of the oldest tricks in fighting is the one-two punch — you distract your opponent with one attack and deliver a knockout blow with another,” said José Onuchic of Rice’s Center for Theoretical Biological Physics (CTBP). “Combinatorial drug therapies employ that strategy at a cellular level. New wireless electronics could heal wounds and then dissolve. Nestled inside a wound, a remote-controlled device perks up and begins releasing bacteria-killing heat, a form of thermal therapy that can fell even the most drug-resistant microbes. 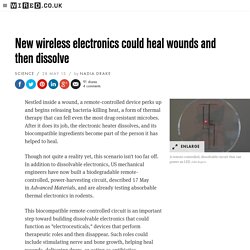 After it does its job, the electronic heater dissolves, and its biocompatible ingredients become part of the person it has helped to heal. Though not quite a reality yet, this scenario isn't too far off. In addition to dissolvable electronics, US mechanical engineers have now built a biodegradable remote-controlled, power-harvesting circuit, described 17 May in Advanced Materials, and are already testing absorbable thermal electronics in rodents. This biocompatible remote-controlled circuit is an important step toward building dissolvable electronics that could function as "electroceuticals," devices that perform therapeutic roles and then disappear. Breast Milk Protein HAMLET Reverses Antibiotic Resistance in MRSA, Pneumococcus. According to a new study reported in the open-access journal PLoS ONE, a human breast milk protein complex called HAMLET can help reverse the antibiotic resistance of bacterial species, including penicillin-resistant Streptococcus pneumoniae and methicillin-resistant Staphylococcus aureus. 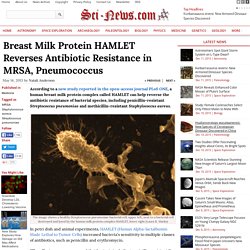 “The effect was so pronounced that bacteria including penicillin-resistant S. pneumoniae and methicillin-resistant S. aureus (MRSA) regained sensitivity to the antibiotics they were previously able to beat,” said lead author Laura Marks and her colleagues from the University at Buffalo. Antibiotic 'apocalypse' warning. 24 January 2013Last updated at 08:18 ET By James Gallagher Health and science reporter, BBC News Drug resistance is a problem in tuberculosis The rise in drug resistant infections is comparable to the threat of global warming, according to the chief medical officer for England. 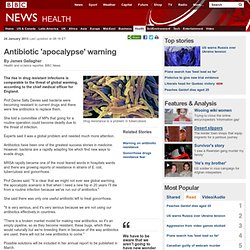 Prof Dame Sally Davies said bacteria were becoming resistant to current drugs and there were few antibiotics to replace them. She told a committee of MPs that going for a routine operation could become deadly due to the threat of infection. Experts said it was a global problem and needed much more attention. Antibiotics have been one of the greatest success stories in medicine. Scientists unveil secrets of important natural antibiotic dermcidin. An international team of scientists has discovered how an important natural antibiotic called dermcidin, produced by our skin when we sweat, is a highly efficient tool to fight tuberculosis germs and other dangerous bugs. 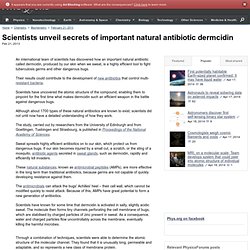 Their results could contribute to the development of new antibiotics that control multi-resistant bacteria. Scientists have uncovered the atomic structure of the compound, enabling them to pinpoint for the first time what makes dermcidin such an efficient weapon in the battle against dangerous bugs. Although about 1700 types of these natural antibiotics are known to exist, scientists did not until now have a detailed understanding of how they work. The study, carried out by researchers from the University of Edinburgh and from Goettingen, Tuebingen and Strasbourg, is published in Proceedings of the National Academy of Sciences.