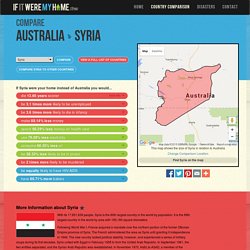 It is the 89th largest country in the world by area with 185,180 square kilometers. Following World War I, France acquired a mandate over the northern portion of the former Ottoman Empire province of Syria. The French administered the area as Syria until granting it independence in 1946. The new country lacked political stability, however, and experienced a series of military coups during its first decades. Syria united with Egypt in February 1958 to form the United Arab Republic. Languages spoken: Arabic (official), Kurdish, Armenian, Aramaic, Circassian (widely understood); French, English (somewhat understood) War in Syria - Syrian Refugee Appeal - UNICEF Australia. The expanding crisis in the Middle East and North Africa has led to a rapid surge in refugees and migrants seeking sanctuary for their families. 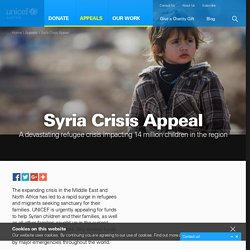 UNICEF is urgently appealing for funds to help Syrian children and their families, as well as all other families caught up in the current wave of humanitarian crises. Any excess funds from this appeal will support children affected by major emergencies throughout the world. With the conflict in Syria now entering its fifth year, more children are displaced as refugess than at any time since the Second World War. Millions have been displaced and are on the move, fleeing their homes to find safety in the surrounding region. Educational Facilities. Help Syria Avoid a 'Lost Generation' Standing in a classroom of Syrian refugee teenagers in Jordan's Zaatari refugee camp, we posed a question: “What do you want to be when you grow up?” 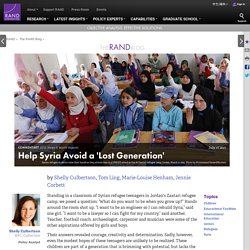 Hands around the room shot up. “I want to be an engineer so I can rebuild Syria,” said one girl. “I want to be a lawyer so I can fight for my country,” said another. Teacher, football coach, archaeologist, carpenter and musician were some of the other aspirations offered by girls and boys. Their answers revealed courage, creativity and determination. The United Nations just announced that there are now 60 million displaced people in the world — the highest number since World War II. Over 620,000 Syrians have fled bloody conflict at home to register as refugees in neighboring Jordan. But across host countries, only half of school-age Syrian children are enrolled in school, with about 60 percent of Syrian children in Jordan enrolled. 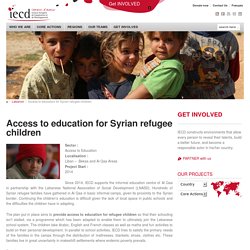 Hundreds of Syrian refugee families have gathered in Al Qaa in basic informal camps, given its proximity to the Syrian border. Continuing the children’s education is difficult given the lack of local space in public schools and the difficulties the children have in adapting. The plan put in place aims to provide access to education for refugee children so that their schooling isn’t stalled, via a programme which has been adapted to enable them to ultimately join the Lebanese school system.

The children take Arabic, English and French classes as well as maths and fun activities to build on their personal development. Results: During the children’s performance for Mother’s Day in Al Qaa, Oum Ahmad said: Why is Sport important for Children? RLS BasicSwimmingReport20122. WorkingwithYoungPeoplewhoareRefugees.