How to perform an ATC check automatically during transport TASK release. The ABAP Test Cockpit (ATC) can easily be configured to check every transport request that is released. 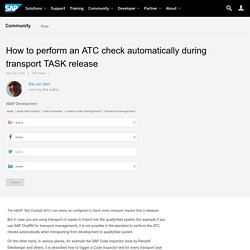 Segmentierung anhand von Objekten (Objekte außerhalb des CRM) - SAP-Dokumentation. SAP-Bibliothek - Business Intelligence. Scheduling Enhancements in Analysis Office. The objective of this document is to introduce the enhancements to the scheduling functionality available in Analysis Office, which is part of the SAP BusinessObjects BI 4.1 suite of products. 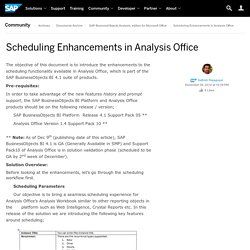 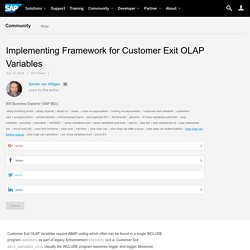 Customer Exit EXIT_SAPLRRS0_001). Usually the INCLUDE program becomes bigger and bigger. Moreover, various people and/or project teams are working in the same place. You can imagine that it is dangerous because one programming or transport sequence mistake can destabilize the entire system. The solution is encapsulation of the coding of individual variables and you will need a framework to realize it. I would like to share via this document detailed technical instructions how to implement such a framework. Please have a look here to download the attachments. SAP Menu: Tools > ABAP Workbench > Utilities > Business Add-Ins > Definition T/code: SE18 Create Enhancement Spot YBW_OLAP_VAR as shown in the screenshots. Low performance during DTP load into an InfoCube at step: Conversion of Characteristic Value to SID - SAP NetWeaver Business Warehouse.

Query Performance and Memory Consumption - SAP NetWeaver Business Warehouse. Untitled. How do i write messages to the monitor in an Ex... The “advanced” DataStoreObject &#82... With BW7.4 SP08 another “feature package” was delivered with a lot of new functionality and optimizations based on the HANA platform (see In accordance with the BW strategy to deliver the HANA-based innovations and renovations non-disruptively to our customers the SP08 delivered a first step in renovating our Persistence Layer. 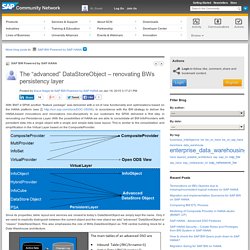 With the possibilities of HANA we are able to consolidate all BW InfoProviders with persistent data into a single object with a single and simple data base layout. This is similar to the consolidation and simplification in the Virtual Layer based on the CompositeProvider. Since its properties, table layout and services are closest to today’s DataStoreObject we simply kept the name. Only if we need to explicitly distinguish between the current object and the new object we add “advanced” DataStoreObject or “classic” DataStoreObject. This also emphasizes the role of BWs DataStoreObject as THE central building block for a Data Warehouse architecture. Major features. Important Housekeeping Principles for keeping y... OpenHub Destination with BEx Query (BW 7.3 SP 8) Runtime Information (properties) of DTP in End ... I need to read the parameters set on a DTP at runtime in End Routine to execute some logic. 1. 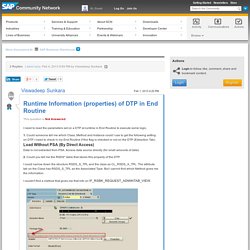 Could someone tell me which Class, Method and Instance could I use to get the following setting on DTP. Introducing an Add-on for Cleansing Character S... As you might know SAP BW does not allow every possible character in character strings. 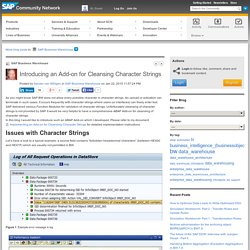 Implementing an Add-on for Cleansing Character. As you might know SAP BW does not allow every possible character in character strings. 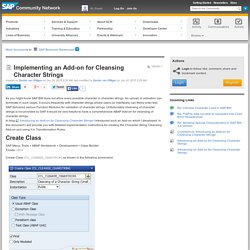 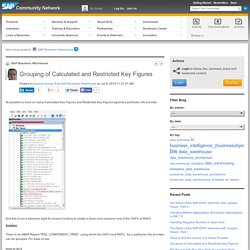 For ease of use How to do it (1) In SE38 transaction, execute the ABAP Report "RSZ_COMPONENT_TREE" (2) Key in the info provider and execute (3) The list of all CKF's and RKF's will be seen (4) Right click on the "Calculated Key Figures" and select "Create Node", giving an appropriate name (5) Drag and drop the needed CKF's inside the node (6) Next, save the operation using the "Save Hierarchy" button.