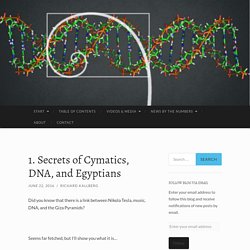 Seems far fetched, but I’ll show you what it is… Introduction to Cymatics To start with, watch this short music video: Did you notice the Tesla coil? Nikola Tesla clearly knew about cymatics* back in the 1890’s… * Cymatics is defined as the study of how sound affects matter. M0014782 Nikola Tesla, with his equipment Credit: Wellcome Library, London. If you were paying attention you may also have noticed the phrase “Everything owes it’s existence solely, and completely, to sound.”

The original clip explaining that phrase can be found here, and incidentally that assertion was something that Nikola Tesla hinted at as well when he said: To start to make sense of this, let’s look at how nature works. Nature and the Fibonacci series (phi) Here are some examples from nature: Phi can even model the reproduction of rabbits, which is in fact how Fibonacci first encountered the ratio: Alexjander goes on to say: 1. 2. THE NARROW GATE.

Buy cheap, simple and efficient orgonites (and for gifting) Where/how to place/use orgonite? 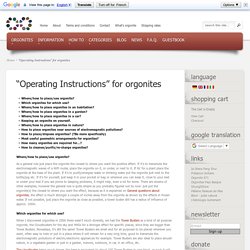 As a general rule just place the orgonite the closest to where you want the positive effect. If it’s to transmute the electromagnetic waves of a WiFi router, place the orgonite on it, or under, or next to it. If its’ for a plant place the orgonite at the base of the plant. If it’s to purify/energise water or drinking water put the orgonite just next to the bottle/jug etc. If it’s for yourself, just keep it in your pocket or bag or wherever you can keep it, close to your bed or under your bed if you are prone to sleeping problems, it might help, even a lot for some.

Which orgonites for which use? When I discovered orgonites in 2006 there wasn’t much diversity, we had the Tower Busters as a kind of all purpose orgonite, the Cloudbusters for the sky and HHGs for a stronger effect for specific places, since they are bigger than Tower Busters. Where/how to place orgonites in an habitation? Wherever you want! The Great Pyramid – A Quantum Solution. 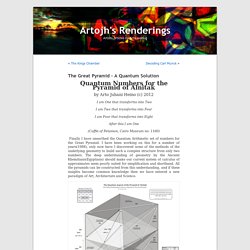 The first two numbers and a ratio translation number are all the information required to reconstruct the Great Pyramid’s elusive design. There are many amazing and promising designs I have encountered, great work using pure geometry to crunch those angles and make it fit, sadly there are many devices used that are artificial and eludes to squaring of the circle, a pursuit rooted in the misunderstanding between a curved line and a straight line, two different forms of measure. Free energy - 김병준의 다락방. Bo Atkinson's Imagine ~ Design ~ Build Services. Radial appliance plans teslabox. Health. Induction coil. Antique induction coil used in schools, from around 1900, Bremerhaven, Germany Induction coil showing construction, from 1920. 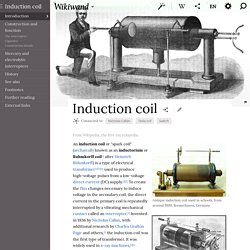 An induction coil or "spark coil" (archaically known as an inductorium or Ruhmkorff coil[1] after Heinrich Rühmkorff) is a type of electrical transformer[2][3][4] used to produce high-voltage pulses from a low-voltage direct current (DC) supply.[1][5] To create the flux changes necessary to induce voltage in the secondary coil, the direct current in the primary coil is repeatedly interrupted by a vibrating mechanical contact called an interrupter.[1] Invented in 1836 by Nicholas Callan, with additional research by Charles Grafton Page and others,[1] the induction coil was the first type of transformer.

It was widely used in x-ray machines,[1][6] spark-gap radio transmitters,[1][6] arc lighting and quack medical electrotherapy devices from the 1880s to the 1920s. Construction and function Schematic diagram The interrupter Capacitor Construction details History. Searching for free energy and discussing free energy. ALTERNATIVE HEALTH APPROACHES. This statement, By Hulda Clark (among many others) is a basis for the application of all of the various "Induced Resonance" Frequency experimental and research approaches I've presented here. 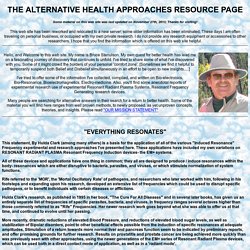 These applications have included my own variations on RESONANT RADIANT PLASMA Resonant Frequency Induction devices- the EM+ systems. All of these devices and applications have one thing in common; they all are designed to produce / induce resonances within the body- resonances which are either disruptive to bacteria, parasites, and viruses, or which stimulate normalization of system functions. Rife referred to the 'MOR', the 'Mortal Oscillatory Rate' of pathogens, and researchers who later worked with him, following in his footsteps and expanding upon his research, developed an extensive list of frequencies which could be used to disrupt specific pathogens, or to benefit individuals with certain diseases or afflictions.