The Viking warrior who turned out to be a woman - BBC Reel. The Female World War II Codebreaker Who Busted Nazi Spy Rings - HISTORY. In March 1942, an American codebreaker named Elizebeth Smith Friedman made a horrifying discovery: Nazi spies in Latin America had located a large Allied supply ship named the Queen Mary along the coast of Brazil, and German U-boats were planning to sink it. 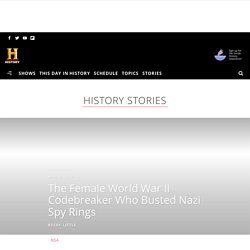 So intent was Adolf Hitler on destroying the ship that he’d offered $250,000 to whichever captain could take it out. 'Mule' a quiet Negro Leagues legend. Faces of Roman Emperors: Imperial Crisis & the Barracks Emperors (Image Gallery) p. 4 - World History Encyclopedia. Image Gallery Send to Google Classroom: A series of facial reconstructions of Roman emperors during the Crisis of the Third Century (235-284 CE), including the Gordian Emperors. 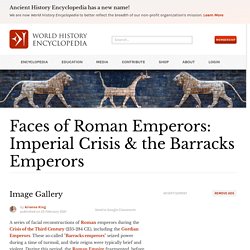 These so-called "Barracks emperors" seized power during a time of turmoil, and their reigns were typically brief and violent. During this period, the Roman Empire fragmented, before being eventually reunified during the reign of Aurelian (270-275 CE). These photorealistic reconstructions are only best guesses at how their subjects may have appeared, based on literary and artistic evidence. Maximinus Thrax (Facial Reconstruction) by Daniel Voshartpublished on 25 October 2020 License Original image by Daniel Voshart. Faces of Roman Emperors: Nerva to the Severan Dynasty (Image Gallery) p. 4. 7 Common Phrases You Didn't Know Were Rooted in Racism. It can be hard to keep track of every new slang word or trending term being used, seeing as language is constantly changing. 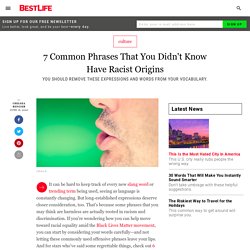 But long-established expressions deserve closer consideration, too. That's because some phrases that you may think are harmless are actually rooted in racism and discrimination. If you're wondering how you can help move toward racial equality amid the Black Lives Matter movement, you can start by considering your words carefully—and not letting these commonly used offensive phrases leave your lips. And for stars who've said some regrettable things, check out 6 Celebrities Who Were Fired After Being Accused of Racism. Rare purple textiles from the time of biblical kings found for the first time in Israel.

Archaeologists have uncovered rare fragments of 3,000-year-old textiles stained purple — a color considered the height of royal fashion at the time — in southern Israel. 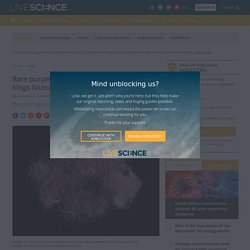 The archaeologists discovered the purple textiles — which included bits of woven fabric, a tassel and a bundle of wool fibers — at Slaves' Hill in Timna Valley, an ancient copper production district in the Arava desert, the team wrote in a new study describing the findings. Radiocarbon dating of the fabrics revealed that they were woven around 1000 B.C., placing them in the time of the biblical kings David and Solomon — who ruled from 1010–970 B.C. and 970–931 B.C., respectively — in Jerusalem.

The Bible mentions the kings and other important figures wearing the color during this time, according to the researchers. Related: 10 fascinating biblical-era discoveries from 2018. Top 10 Discoveries of 2020. Alcohol Through the Ages. (Minneapolis Institute of Arts/Bridgeman Images) Roman fresco of a deity holding a drinking horn and wine bucket The happy accident of biting into a piece of fruit or sipping liquid imbued with the intoxicating properties imparted by fermentation must have beguiled innumerable early humans and their ancestors. 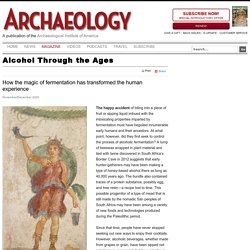 At what point, however, did they first seek to control the process of alcoholic fermentation? A lump of beeswax wrapped in plant material and tied with twine discovered in South Africa’s Border Cave in 2012 suggests that early hunter-gatherers may have been making a type of honey-based alcohol there as long as 40,000 years ago. The bundle also contained traces of a protein substance, possibly egg, and tree resin—a recipe lost to time.

Since that time, people have never stopped seeking out new ways to enjoy their cocktails. Siberian Island Enigma. By JARRETT A. 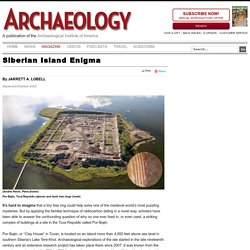 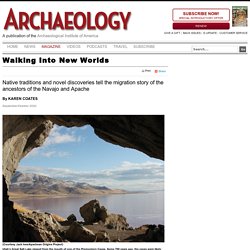 Some 700 years ago, the caves were likely occupied by speakers of the Dene language family who took part in migrations from present-day Subarctic Canada to the American Southwest. Ancient canyons, dry mesas, and high deserts form the iconic landscape of what is now called the American Southwest. A Nubian Kingdom Rises. (Robert Harding/Alamy Stock Photo) 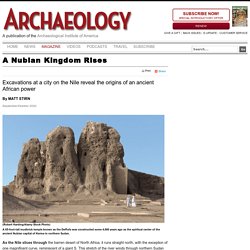 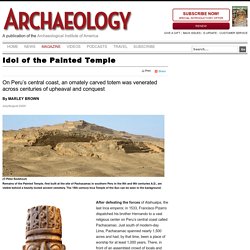 The 15th-century Inca Temple of the Sun can be seen in the background. The Pachacamac Idol was discovered in the rubble of the Painted Temple and may represent its principal deity. After defeating the forces of Atahualpa, the last Inca emperor, in 1533, Francisco Pizarro dispatched his brother Hernando to a vast religious center on Peru’s central coast called Pachacamac. Just south of modern-day Lima, Pachacamac spanned nearly 1,500 acres and had, by that time, been a place of worship for at least 1,000 years. Just over 400 years after Pizarro’s raid on Pachacamac, in 1938, avocational archaeologist Albert Giesecke discovered a wooden sculpture roughly eight feet tall and five inches in diameter hidden among rubble from what was once the north atrium of Pachacamac’s Painted Temple. In the Reign of the Sun Kings. By ERIC A. 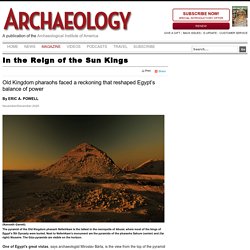 POWELL (Kenneth Garrett) From Head to Toe in the Ancient Maya World. A Late Classic (A.D. 600–900) Maya vase from the Peten region of Guatemala portrays a king and queen (above, center) preparing to perform a ceremonial dance. Both royal figures wear feather headdresses. The king’s headgear features a headband with a jade diadem that was a symbol of royal authority. The king has swirls of red paint on his upper body, and the queen has red lines painted below her eyes. A kneeling male attendant applies red paint to the king’s backside, while a standing male attendant holds a mirror for him. A female attendant (above, far left) holds a mask that the king will wear during the dance.

(Photograph © 2020 Museum of Fine Arts, Boston. How people dress and adorn themselves has long been a primary way of showcasing their identity and communicating it to others. 6 Legendary Lost Treasures of World War II. War has always brought chaos, and with it an opportunity for pillage and plunder. This was especially true during World War II, when countless pieces of priceless art, artifacts and other treasure were destroyed and spirited away from both Europe and the Asia Pacific. Nazis, in particular, systematically looted cultural property from museums, private homes and royal palaces, some of it to help Adolf Hitler build his proposed Führermuseum, but other armies carried away their own spoils as well.

When the war ended, tales of real and imagined lost treasures blended together, especially when it came to rumors of stolen Nazi gold. Ancient Egypt's 10 Most Jaw-Dropping Discoveries. Ancient Egypt may be long gone, but archaeologists keep finding its treasures. For more than 3,000 years, one of history’s greatest civilizations flourished along the winding Nile River in northeast Africa. But after Egypt fell under first Greek, then Roman, and finally Muslim control, the ancient civilization’s glories were buried under layers of these different cultures, only to surface again centuries later as archaeologists and historians embraced the study known as Egyptology. Beginning in the 19th century, bombshell discoveries such as the Rosetta Stone and the lavish tomb of Tutankhamen in the Valley of the Kings, as well as the excavation of the Pyramids at Giza, opened the doors to a new understanding of ancient Egypt’s mysteries, fueling an explosion of interest—and tourism.

Many of ancient Egypt’s rulers—known today as pharaohs—built themselves elaborate monuments and tombs, inscribing them with their names and achievements in hieroglyphics. Thelocal. Here are eight facts you probably didn't know about them: 1. They engaged in human sacrifice This was strictly restricted to Rome’s Regal period, circa 753-509 BC, and Republican period, 509-44 BC. 1,200-year-old pagan temple to Thor and Odin unearthed in Norway. The remains of a 1,200-year-old pagan temple to the Old Norse gods such as Thor and Odin have been discovered in Norway — a rare relic of the Viking religion built a few centuries before Christianity became dominant there. Archaeologists say the large wooden building — about 45 feet (14 meters) long, 26 feet (8 m) wide, and up to 40 feet (12 m) high — is thought to date from the end of the eighth century and was used for worship and sacrifices to gods during the midsummer and midwinter solstices.

Old Norse culture was famous and feared by some a century later, after bands of Norse sailors and warriors known as the Vikings started trading, raiding and colonizing throughout Europe and into Iceland, Greenland and Canada. Related: Did the Vikings think the gods were watching them? The 10 Most Exciting Archeological Discoveries In World History. Though there are new archaeological discoveries all the time, every now and then, excavators will find something big. These important findings change our understanding of the past and help to fill in missing details that have been lost to history.

History. 1. Derinkuyu. Ancient Teeth Show 'Invasion' of Egypt 3,600 Years Ago Was No Invasion at All. The last slave ship survivor and her descendants identified. Texans You Should Know: How a Black Cowboy’s Discovery Changed the Field of Archaeology. On the evening of August 27, 1908, dark clouds gathered over the Dry Cimarron River along the New Mexico–Colorado border. Sarah Rooke, the phone operator in Folsom, New Mexico, called as many people as she could to warn them about the impending storm, but it wasn’t long before water began pouring from the sky and rushing through the town, wiping away entire buildings in its path.

More than a dozen lives, including Rooke’s, were lost in the flash flood that night. Snakestones: the myth, magic and science of ammonites. The archaeology of commoners. Until the past few decades, archaeology was all about the grand and the wealthy, focused on temples, palaces, and spectacular artifacts — think King Tut's tomb, or the great temples and palaces of the Mayan city of Tikal. Remarkable ‘Sewn’ Roman Shipwreck is Croatia’s Biggest Find of 21st Century. Croatia has an already rich archaeological heritage and now, experts have announced the recent discovery of a rare Roman shipwreck. Mummy of ancient Egyptian teenager, buried in fine jewelry, discovered in Luxor. Archeologists Find Long-Lost Biblical City and Rare Figurine of Canaanite God Baal  Maya Murals: Stunning Images of King & Calendar. Maya Artwork. Lost Clan Campbell Seal Reveals Clues to Scottish Feud.

An Eerie Egyptian Burial Has Been Found, With Nonsense Hieroglyphs on The Coffin. More Than 20 Ancient Egyptian Coffins in Pristine Condition Have Just Been Uncovered. Artifact. History. The New Treasures of Pompeii. World of the Griffin Warrior. Digging Deeper into Pompeii’s Past. History. History. Clotilda, 'last American slave ship,' discovered in Alabama. History. History. Life in a Busy Oasis. A Hidden Underground Chamber Has Been Found in The Palace of Emperor Nero. A Warrior-Prince's Elaborate Tomb Was Excavated Near London. Here's What Was Inside. Ever Wonder Why Egyptian Sculptures Are Missing Their Noses? The Answer Will Surprise You.

How Literacy Became a Powerful Weapon in the Fight to End Slavery. New Research Suggests Alexander Hamilton Was a Slave Owner. The Forgotten Story of the U.S. Navy’s First Black Officers. A Ship of Jewish Refugees Was Refused US Landing in 1939. This Was Their Fate. The Underground Spaces Where Drinking While Female Was a Radical Act. Why Friday the 13th Spelled Doom for the Knights Templar. Did Cleopatra Really Die by Snake Bite? - The Washington Post. The Mysterious Deaths of 6 Historical Figures. When W. E. B. Du Bois Made a Laughingstock of a White Supremacist. Japan Approves Groundbreaking Experiment Bringing Human-Animal Hybrids to Term.