A Clean Sweep: Mastering Sweep Arpeggios with John Petrucci. Here's a classic column from the pages of Guitar World magazine. 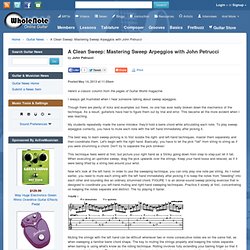 I always get frustrated when I hear someone talking about sweep arpeggios. Though there are plenty of licks and examples out there, no one has ever really broken down the mechanics of the technique. As a result, guitarists have had to figure them out by trial and error. This became all the more evident when I was teaching. My students repeatedly made the same mistake: they'd hold a barre chord while articulating each note.

The best way to learn sweep picking is to first isolate the right- and left-hand techniques, master them separately and then coordinate them. This technique feels weird at first, but picture your right hand as a Slinky going down from step to step-just let it fall. Cook Your Own Distortion. Making your own distortion design is easy. 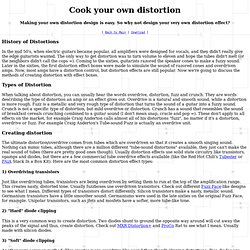 So why not design your very own distortion effect? [ Back to Main | Download ] History of Distortions In the mid 50's, when electric guitars became popular, all amplifiers were designed for vocals, and they didn't really give the edge guitarists wanted. The only way to get distortion was to turn volume to eleven and hope the tubes didn't melt (or the neighbors didn't call the cops =).

Types of Distortion When talking about distortion, you can usually hear the words overdrive, distortion, fuzz and crunch. Creating distortion The ultimate distortion/overdrive comes from tubes which are overdriven so that it creates a smooth singing sound. 1) Overdriving transistors Just like overdriving tubes, transistors are being overdriven by setting them to run at the top of the amplification range. 2) "Hard" diode clipping This is a very common way to create distortion. 3) "Soft" diode clipping Another very common method.

The Technology of Wah Pedals. Version 1.7 9/27/99 - More wah circuits, how and why the classic wah works, and some mods, plus connections to human voice info Copyright 1999 R.G. 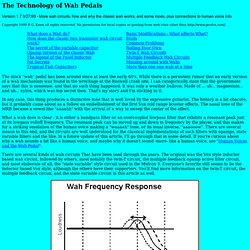 Keen all rights reserved. No permission for local copies or posting from web sites other than The stock "wah" pedal has been around since at least the early 60's. While there is a persistent rumor that an early version of a wah mechanism was found in the wreckage at the Roswell crash site, I can categorically state that the government says that this is nonsense, and that no such thing happened. In any case, this thing produces a distinctive tone that is well loved by the expressive guitarist. What a wah does is clear - it is either a bandpass filter or an overcoupled lowpass filter that exhibits a resonant peak just at its lowpass rolloff frequency. There are several kinds of wah circuits That have been used through the years. The Vox Mystery The Vox circuit is pretty simple, only a couple of transisors and an inductor. Let's dive right in. Designing JFET Audio PreAmplifiers. Transconductance The ability of a JFET to amplify is described as trans-conductance and is merely the change in drain current divided by the change in gate voltage. 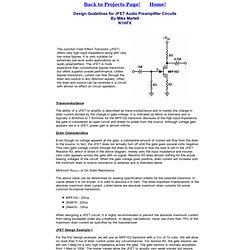 It is indicated as Mhos or Siemens and is typically 2.5mmhos to 7.5mmhos for the MPF102 transistor. Because of the high input impedance, the gate is considered an open circuit and draws no power from the source. Although voltage gain appears low in a JFET, power gain is almost infinite. Drain Characteristics Even though no voltage appears at the gate, a substantial amount of current will flow from the drain to the source.

Minimum Rds(on) or On State Resistance The above value can be determined by reading specification sheets for the selected transistor. MPF102 - 20ma 2N3819 - 22ma 2N4416 - 15ma When designing a JFET circuit, it is highly recommended to prevent the absolute maximum current from being exceeded under any conditions. JFET Design Example 1 Vcc = 12 Minimum Rds(on) = 0 Ids = 5 ma. Blend pot + master volume + master tone. Allparts now has the bourns blends as well. nicely made, and just about zero resistance in the middle. i'm not so sure about the taper thing, though; ungrounded, we're just talking about adding series resistance to one pickup or the other. it stands to reason that a 250k blend will at a given degree of turn present less resistance than a 500k at the same point, and so the 250k will "dim" the pickup a little less, therefore shading a little more gradually than the 500k will. the trade-off (isn't there always a trade-off? 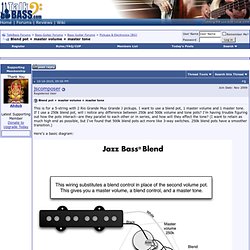 ) is that it doesn't turn the pickup quite as "off" as the 500k would. you still hear a little something if you tap on the "off" pickup with a screwdriver. (i don't hear it when playing, though, so i don't think it's a big issue.) if i ever come across a 100k or 50k M/N, i'm going to try that, maybe modded to true "no-load" by cutting the carbon traces at the ends. it might get really smooth blending, combined with truly cutting off the pickup when turned all the way. The Guitar Wiring Blog. Tone Pot as a Low Pass Filter - Planet Z.