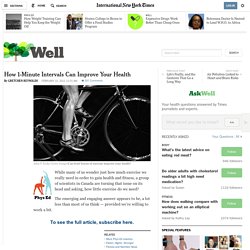 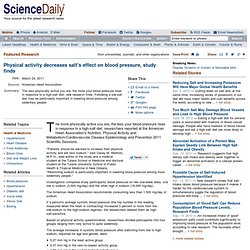 "Restricting sodium is particularly important in lowering blood pressure among more sedentary people. " Investigators compared study participants' blood pressure on two one-week diets, one low in sodium (3,000 mg/day) and the other high in sodium (18,000 mg/day). The American Heart Association recommends consuming less than 1,500 mg/day of sodium. How Exercise Lowers Blood Sugar in Type 2 Diabetes - Type 2 Diabetes. If you stick with it, exercise can reduce your need for blood-sugar-lowering drugs. 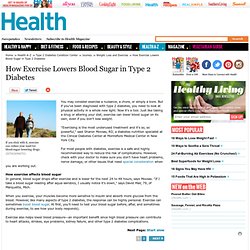 Physical Inactivity May Cause As Many Deaths As Smoking. Put Those Shoes On: Running Won't Kill Your Knees. Hide captionPaul Rider runs on Mulholland Drive in Los Angeles, March 25, 2011. 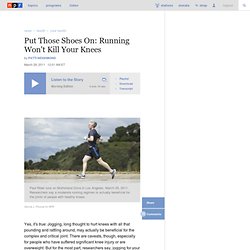 Exercise: Good For Knees After All. For most of my adult life, I’ve held to the belief that there is no such thing as bad exercises – only bad ways to do good exercises. 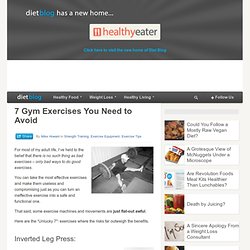 You can take the most effective exercises and make them useless and compromising just as you can turn an ineffective exercise into a safe and functional one. That said, some exercise machines and movements are just flat-out awful. Here are the “Unlucky 7″: exercises where the risks far outweigh the benefits. Inverted Leg Press: Move Your Body And Fight Arthritis, Four Types Of Exercise Can Help Treat Arthritis And Rheumatic Diseases. Exercise eases arthritis in obese mice even without weight loss. Adding another incentive to exercise, scientists at Duke University Medical Center have found that physical activity improves arthritis symptoms even among obese mice that continue to chow down on a high-fat diet. 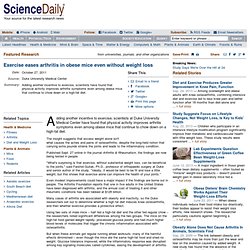 The insight suggests that excess weight alone isn't what causes the aches and pains of osteoarthritis, despite the long-held notion that carrying extra pounds strains the joints and leads to the inflammatory condition. Effects of glucosamine, chondroitin, or placebo in patients with osteoarthritis of hip or knee: network meta-analysis. Abstract Objective To determine the effect of glucosamine, chondroitin, or the two in combination on joint pain and on radiological progression of disease in osteoarthritis of the hip or knee. 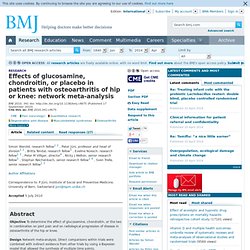 Design Network meta-analysis. Direct comparisons within trials were combined with indirect evidence from other trials by using a Bayesian model that allowed the synthesis of multiple time points. Main outcome measure Pain intensity. Popular supplements to combat joint pain do not work, study finds. Two popular supplements taken by millions of people around the world to combat joint pain, do not work, finds research published online in the British Medical Journal. 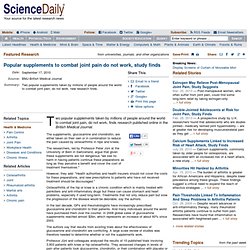 The supplements, glucosamine and chondroitin, are either taken on their own or in combination to reduce the pain caused by osteoarthritis in hips and knees. The researchers, led by Professor Peter Jüni at the University of Bern in Switzerland, argue that given these supplements are not dangerous "we see no harm in having patients continue these preparations as long as they perceive a benefit and cover the cost of treatment themselves.

" However, they add: "Health authorities and health insurers should not cover the costs for these preparations, and new prescriptions to patients who have not received treatment should be discouraged. " How to get your metabolism moving. Want to burn calories while you sleep? 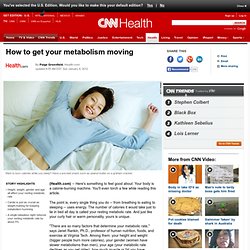 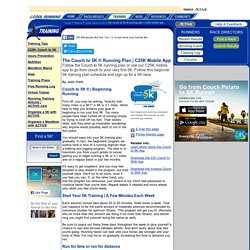 Is marijuana unhealthier than people think? This is pure disinformation. It has been shown that habitual marijuana smokers are less likely to contract cancer. It has also been shown that cannabis oil kills all cancer cells (Google Rick Simpson & others). Marijuana has amazing healing potential (with NO side-effects) and could replace over 20% of pharmaceutical drugs, BUT is cannot be patented – so Big Pharma spends $Millions to discredit, smear and criminalize it. 5.5 million people die every year from tobacco related illnesses. Teenage Marijuana Use May Hurt Future IQ. Aug 27, 2012 5:38pm Reported by Drs. Tiffany Chao and Shari Barnett: Teenagers lighting joints may end up less bright, according to new research released Monday.

In a study of more than 1,000 adolescents in New Zealand, those who began habitually smoking marijuana before age 18 showed an eight-point drop in IQ between the ages of 13 and 38, a considerable decline. The average IQ is 100 points. The research, published in the Proceedings of the National Academy of Sciences, charted the IQ changes in participants over two decades.

Researchers tested the IQs of all of the study subjects at age 13 before any habitual marijuana use.