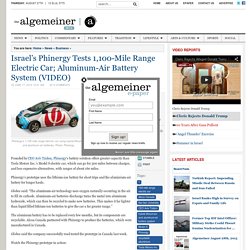 Photo: Phinergy. Israeli start-up Phinergy Ltd. is road testing a 1,100-mile range electric car based on a hybrid lithium-ion and aluminum-air battery system based on technology originating at Bar Ilan University and produced in Canada in collaboration with Alcoa Canada, Israel’s Globes business daily reported on Tuesday. Founded by CEO Aviv Tzidon, Phinergy‘s battery solution offers greater capacity than Tesla Motors Inc.’s Model S electric car, which can go for 300 miles between charges, and less expensive alternatives, with ranges of about 160 miles. Phinergy’s prototype uses the lithium-ion battery for short trips and the aluminium-air battery for longer hauls. The Influence Vedic Philosophy Had On Nikola Tesla’s Idea Of Free Energy. The Properties of Space: Science works best when in harmony with nature. 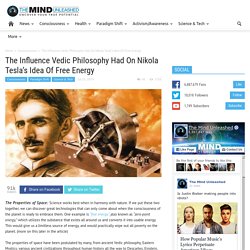 Open Source Plans for Modern Tesla Free Energy Generator Released to Public. "This new power for the driving of the world’s machinery will be derived from the energy which operates the universe, the cosmic energy, whose central source for the earth is the sun and which is everywhere present in unlimited quantities.” 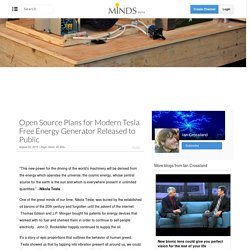 –Nikola Tesla One of the great minds of our time, Nikola Tesla, was buried by the established oil barons of the 20th century and forgotten until the advent of the internet. Thomas Edison and J.P. Morgan bought his patents for energy devices that worked with no fuel and shelved them in order to continue to sell people electricity. Unveiling the Mystics of Sacred Geometry. Sacred Geometry, how can I find the words to describe it? 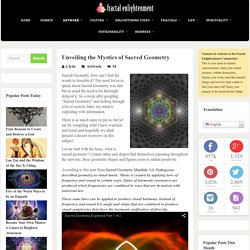 The need for us to speak about Sacred Geometry was dire but as usual the need to be thorough delayed it. So a week after googling “Sacred Geometry” and trolling through a lot of esoteric links, my mind is exploding with information. There is so much more to put in, but let me try compiling what I have watched and learnt and hopefully we shall present a decent overview on this subject. Learn How This Family Grows 6,000 Lbs Of Food on Just 1/10th Acre. Ever thought of growing your own food but didn’t think it was possible? 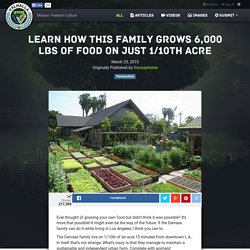 It’s more that possible! It might even be the way of the future. If the Dervaes family can do it while living in Los Angeles, I think you can to. The Dervaes family live on 1/10th of an acre 15 minutes from downtown L.A.. A 300 Million Year Old Screw Has Researchers Baffled. There are numerous archaeological discoveries that science cannot understand, we have come across countless findings that have ended up as being just that, findings that have caught the attention of researchers, but have yet to be accurately explained. 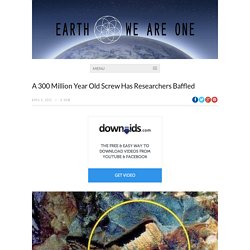 In this case we have a screw that according to researchers is 300 million years old, and like many awkward discoveries in the past, it was found in Russia in the 90’s. Russian scientists found it by chance actually, as they were performing analysis after the fall of a meteorite in the Kaluga region when they came across a mysterious object that resembled a modern-day screw.

Scientists were baffled and did not know what to think of it. Did it come from space? A New Form Has Been Discovered in Sacred Geometry — Meet The Chestahedron. Apparently the heart doesn’t pump blood but is the vortex regulator of the blood as the blood flows through the arteries and veins. 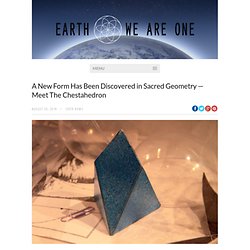 Frank Chester studied Rudolf Steiner and discovered through his understanding of the Platonic forms the geometry of the heart. The article below is titled The Mysterious Heart and was published in a German Magazine, The Discovery of the Chestahedron A European journey in the 1990’s led Frank Chester, the San Francisco retired teacher, sculptor and geometer, to Dornach in Switzerland. Prior to this journey he had never heard anything about Rudolf Steiner or Anthroposophy. Groundbreaking Energy Ball Wind Turbine for Home Power. Swedish company Home Energy developed a wind generator that works slightly differently than your regular, bladed, mechanism. 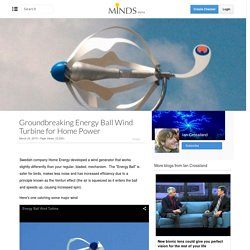 The "Energy Ball" is safer for birds, makes less noise and has increased efficiency due to a principle known as the Venturi effect (the air is squeezed as it enters the ball and speeds up, causing increased spin). Here's one catching some major wind According to the Technical University of Delft in Holland, the machine's utilization of the wind enables it to be 40% more efficient than bladed wind generators of the same diameter. Normalize. Scientists Just Created Crystals That Make Breathing Underwater A Possibility. Danish scientists are a step closer to significantly helping people who suffer from respiratory ailments, thanks to a revolutionary new absorption crystal. 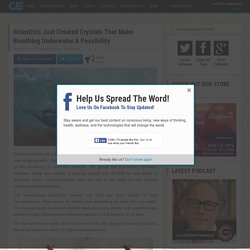 Working out of the University of Southern Denmark, the group has uncovered crystalline materials which are capable of pulling oxygen out of both air and water, a discovery which could eventually mark the end of the need to carry around cumbersome oxygen tanks. The revolutionary crystalline material can bind and store oxygen in high concentrations, then control its release time depending on what the user needs. Proven Alternative Energy - The Searl Generator. Jefferey Jaxen, ContributorWaking Times Monopolies are nothing new to humanity. 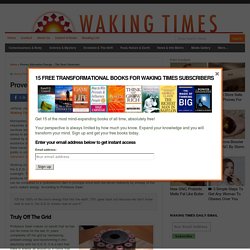 For industries and corporations whose life blood revolves around their bottom line, it only makes sense to always push to monopolize their market by any means necessary. However, the existence of a monopoly does not suggest that there haven’t been, or aren’t currently, better ways and products, it simply means that the general public is unaware of them. This has been the case with Professor John Searl and his Searl Effect Generator (S.E.G.) for the past 60 years.

Constantinesco: US Patent # 1,582,734; Power Transmission G. Constantinesco: US Patent # 1,591,471; Power Transmission Mechanism G. Popular Science (Feb. 1924) Pneumatic Options Research Library. In 1987, I advertised my booklet Solar Air Car in Mother Earth News, sold three copies and gave the other three away. One of these copies went to a near-engineer I knew named Tom Kiteley. Tom was a Republican and a Die Hard Skeptic, but he was trying to be fair when he evaluated my ideas on request at no charge. Fluid tech. The topics of inventions and the principles of the structural elements Pipes, machines, vehicles. Walter Russell Documentary. The University of Science and Philosophy. The University of Science and Philosophy. The Secret of Light. Vortex Research. Books & Publications by Walter and Lao Russell.

Viktor Schauberger. IMPLOSION: Most energy sources in use today run on pressure. Like a steam engine, energy is used to boil water to make steam at high pressure. Then, that steam is released through the steam engine to make mechanical energy to run electric generators. But Nature uses the opposite process. It uses a temperature drop to produce a spinning low pressure mechanism to produce a Tornado or a Hurricane.