Scientist claim to possibly have found Pyramid like structures in Antarctica - Think Research Expose. Reposted from: AllVoices.com Pyramids have been discovered in the Antarctic, according to a news article on Scienceray.com. 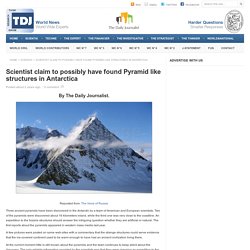 A team of 8 explorers from America and Europe claim to have found evidence of three man made pyramids ‘peaking’ through the melting ice, states the author: “Can it be possible that Antarctica was once warm enough in the recent past to actually have had an ancient civilization living there? ~ 5000+ years old underwater Hindu Temple at Bali-Indonesia. Hinduism (Sanatan Dharma) is world’s oldest Civilization having history over 12000 years; had influence almost across the World till western Abrahmic religions formed some 2500 years back which are rejecting/destroying great ancient human heritage wherever they spread! 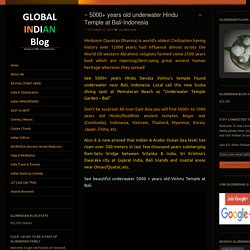 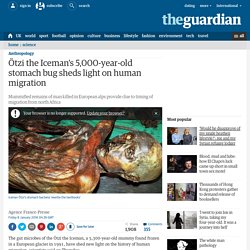 Researchers thawed the remains of Ötzi, who was killed by an arrow when he was between 40 and 50 years old and hiking across the Ötztal Alps, which straddle modern-day Italy and Austria. When they tested the contents of his stomach, they found a bacterium called Helicobacter pylori, an age-old pathogen that has evolved into different strains according to the region of the world in which it is found.

“Surprisingly, a strain of bacterium in his gut shares ancestry with an Asian strain,” said the study in the US journal Science. “In contrast to the fact that most modern Europeans harbor a strain ancestral to north African strains.” “This one genome has put things into wonderful perspective for us,” said Yoshan Moodley, a researcher at the University of Venda in South Africa. NASA Claim “Dozens” Of Advanced Civilisations Existed Before Us.

A new NASA study reveals that dozens of ancient advanced civilisations much like ours once existed on Earth, but they all came to an abrupt end. 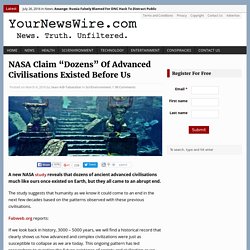 Three Ancient Alien Sanctuaries that scientists cannot explain ⋆ There are many places on Earth that baffle archaeologists and scholars ever since their discovery but we can probably isolate a few of them which have been built which such precision that modern-day engineers and architects cannot replicate them. 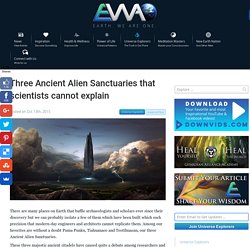 Among our favorites are without a doubt Puma Punku, Tiahuanaco and Teotihuacan, our three Ancient Alien Sanctuaries. These three majestic ancient citadels have caused quite a debate among researchers and the general population. All three defy our understanding of ancient man in every way, raising numerous questions that modern-day scholars cannot answer. Mythical Tomb of Osiris, God of the Underworld, Discovered in Egypt. An amazing discovery has been made by a Spanish-Italian archaeological team in Egypt – an ancient reproduction of the legendary Tomb of Osiris, the god of the dead in Egyptian mythology, was found in the necropolis of Sheikh Abd el-Qurna, on the West Bank at Thebes. 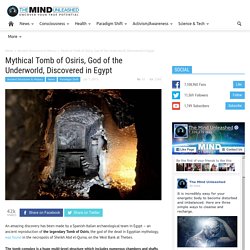 The tomb complex is a huge multi-level structure which includes numerous chambers and shafts. Ancient Aliens – The Cygnus Mystery. The Yucatan Hall Of Records – The Atlantis Connection. John Anthony West: Alternative Egypt. EWAO Researchers discover a 1.7 million year old man-made bridge. Ivan Ivan has been part of the team at Universe Explorers since February 2015.He is a freelance writer, editor-in-chief of ancient-code.com He also writes for Svemir Online and Ancient Origins.History, Archaeology, Space and world’s mysteries are some of the topics he writes about.You can follow Ivan on Facebook" Latest posts by Ivan (see all) It seems that researchers have confirmed that “Adam’s Bridge” is in fact an artificial bridge constructed 1,700,000 years ago. 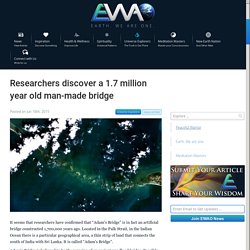 Located in the Palk Strait, in the Indian Ocean there is a particular geographical area, a thin strip of land that connects the south of India with Sri Lanka. It is called “Adam’s Bridge”. Adam’s Bridge is believed to be the remains of an ancient pre-flood bridge. Several researchers do not share the mainstream views of science. However, there are many ancient cultures that talk about catastrophic events such as flood; Sumerian, Greek, Chinese, Native American. According to website soulhealer.com Dr. Dr. Source: Is Egypt closer to unlocking the mystery of Queen Nefertiti in King Tut's tomb? The first infrared scans of the tomb of Tutankhamun could indicate a hidden chamber behind a wall, Egypt’s minister of antiquities announced this week, raising hopes that the crypt of Queen Nefertiti could be found. 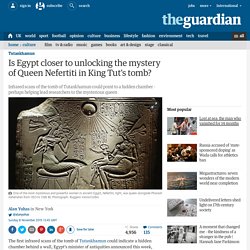 Representatives of the ministry of antiquities and a team of international archaeologists “started the first experiment using infrared thermography to map out the temperature of the walls of Tutankhamun’s tomb”, minister Mamduh al-Damati said in a statement. “The preliminary analyses have shown differences in the temperatures registered on different parts of the northern wall” of the tomb, he said. Al-Damati added that the team would need to verify the early findings with several more tests and analyses. The first experiment kept researchers in the tomb for 24 hours; the scientists will need a week or more to confirm the results. The remains of a 200,000 year old advanced civilization found in Africa.

The incredible discovery was made in South Africa, around 150 km west of port Maputo. 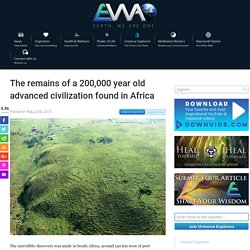 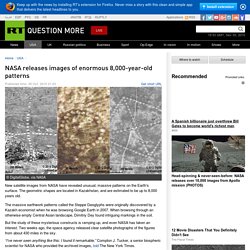 The geometric shapes are located in Kazakhstan, and are estimated to be up to 8,000 years old. The massive earthwork patterns called the Steppe Geoglyphs were originally discovered by a Kazakh economist when he was browsing Google Earth in 2007. When browsing through an otherwise empty Central Asian landscape, Dimitriy Dey found intriguing markings in the soil. But the study of these mysterious constructs is ramping up, and even NASA has taken an interest. Two weeks ago, the space agency released clear satellite photographs of the figures from about 430 miles in the sky. Harmonia Macrocosmica — History's Most Beautiful Star Maps.