Obras de arte hechas con vidrio. Elan Technology Art Glass. History of glass - Wikipedia. The history of glassmaking can be traced back to 3500 BCE in Mesopotamia, but Mesopotamians may have created second-rate copies of glass objects from Egypt, where this complex craft actually originated.[1] Other archaeological evidence suggests that the first true glass was made in coastal north Syria, Mesopotamia or Egypt.[2] The earliest known glass objects, of the mid second millennium BC, were beads, perhaps initially created as accidental by-products of metal-working (slags) or during the production of faience, a pre-glass vitreous material made by a process similar to glazing. 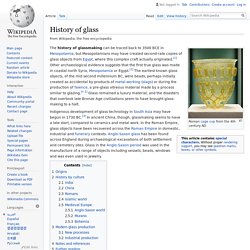 [n 1] Glass remained a luxury material, and the disasters that overtook late Bronze Age civilizations seem to have brought glass-making to a halt. Indigenous development of glass technology in South Asia may have begun in 1730 BC.[3] In ancient China, though, glassmaking seems to have a late start, compared to ceramics and metal work. Origins[edit] History by culture[edit] India[edit] The History of Glass - Glass Facts. Corning Museum of Glass. Museum of Glass. Sandwich Glass Museum – Glasriket. National Greentown Glass Association: Museum News. Call the Museum - 765-628-6206 he Greentown Glass Museum was dedicated on June 13, 1970, the 67th anniversary of the burning of the Indiana Tumbler and Goblet Company. 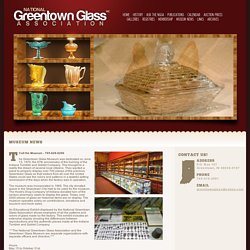 This brought to a reality the dream of several local citizens. They wanted a place to properly display over 700 pieces of the precious Greentown Glass so that visitors from all over the United States could see the colors and patterns in a tasteful setting reminiscent of the days when the factory was in operation. The museum was incorporated in 1969. The National Bottle Museum. The Stained Glass Museum - Home Page. Welcome - Isle of Wight Glass Museum.