You just failed in a class. What now? Getting a failing mark for a subject at the end of a semester is one experience every college student should never wish to encounter. 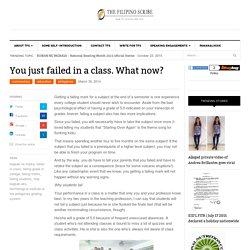 Aside from the bad psychological effect of having a grade of 5.0 indicated on your transcript of grades forever, failing a subject also has two more implications. Since you failed, you will necessarily have to take the subject once more (I loved telling my students that “Starting Over Again” is the theme song for flunking kids). That means spending another four to five months on the same subject! What's up with the smart-shaming? "Sige na, matalino ka na. 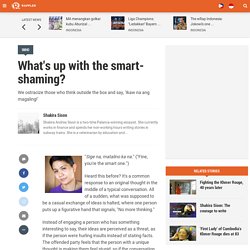 " ("Fine, you're the smart one. ") Heard this before? It's a common response to an original thought in the middle of a typical conversation. All of a sudden, what was supposed to be a casual exchange of ideas is halted, where one person puts up a figurative hand that signals, "No more thinking. " Anti-Catholic Rappler continues attack against the Church! Include Marites Vitug and Aries Rufo for their continued bias against the Catholic Church! 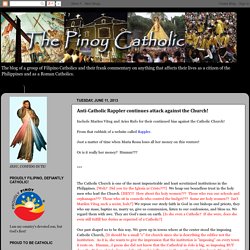 From that rubbish of a website called Rappler. Just a matter of time when Maria Ressa loses all her money on this venture! Or is it really her money? Hmmm??? The Catholic Church is one of the most impenetrable and least scrutinized institutions in the Philippines. Netizens decry DOH anti-pregnancy video. The music video talks about young relationships, sexual intercourse, and teenage pregnancy MANILA, Philippines – It’s a double whammy for the Department of Health’s (DOH) new infomercial, after netizens slammed it for its negative take on teenage pregnancy in a music video that sounded similar to a popular Korean pop song. 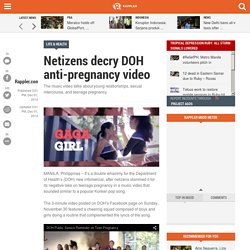 The 3-minute video posted on DOH’s Facebook page on Sunday, November 30 featured a cheering squad composed of boys and girls doing a routine that complemented the lyrics of the song. The song talks about young relationships, sexual intercourse, and teenage pregnancy from the perspective of a teenage girl, a teenage boy, and an adult. Boy:Kung ako’y mahal moSurrender mo ang bandilaIbigay mo naSagot kita, sagot kita. Why Pinoys Spend So Much To Get The Starbucks Planner That They'll Never Use Anyway. How much does it cost to get the 2015 Starbucks Planner? 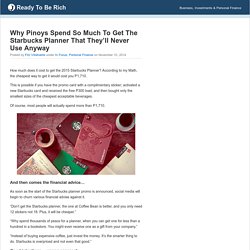 According to my Math, the cheapest way to get it would cost you P1,710. This is possible if you have the promo card with a complimentary sticker; activated a new Starbucks card and received the free P300 load; and then bought only the smallest sizes of the cheapest acceptable beverages. Of course, most people will actually spend more than P1,710. And then comes the financial advice… As soon as the start of the Starbucks planner promo is announced, social media will begin to churn various financial advise against it. Filipinos Get The Rudest Comments Ever.

This is my reply to qiuwtp’s definition of Filipinos: Filipinos are inhabitants of the Philippine Islands located in South-East Asia. 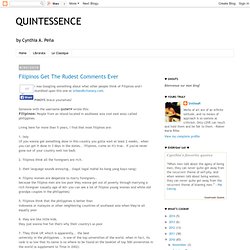 Korean Actress Insulted Filipinos? Lee Da Hae insulting Filipinos. There has been a recent commotion online (at least among Filipinos, particularly Filipino English teachers) due to a video clip circulating in cyberspace about how this certain Korean actress, Lee Da Hae, apparently insulted the English skills of Filipinos in one of the shows of KBS. 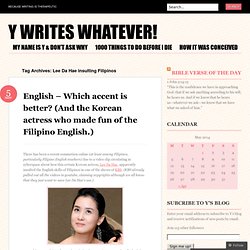 (KBS already pulled out all the videos in youtube, claiming copyrights although we all know that they just want to save Lee Da Hae’s ass.) I was able to watch it and even though the show was in Korean, they flashed the flags of USA, UK and the Philippines, enough for non-Korean speaking viewers to understand that they were talking about these 3 countries. Lee Da Hae, who as claimed speaks English well as she stayed in Australia for 5 years to study, tried talking or mimicking English teachers from the different countries mentioned above as requested by the hosts. 10 Ways To Offend The Filipino Pride. Filipinos really value their pride as a race. 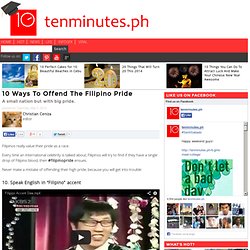 Every time an international celebrity is talked about, Filipinos will try to find if they have a single drop of Filipino blood, then #filipinopride ensues. Why Are Filipinos Obsessed With Becoming White? Many Filipinos are willing to spend thousands of pesos just to turn their skin into a lighter shade of brown, then call it ‘white’. 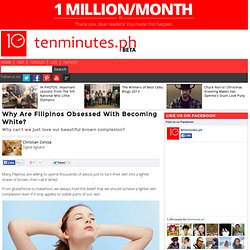 From glutathione to malathion, we always hold this belief that we should achieve a lighter skin complexion even if it only applies to visible parts of our skin. kikaysikat.com But why? According to a story we read in elementary school books, we are neither underbaked or overbaked, the Lord just got us out of the oven at the right time. Why do we try to change God’s creation? Why aren’t we contended with being kayumanggi? Colonial mentality. amazon.com, Brown Skin, White Minds by E. 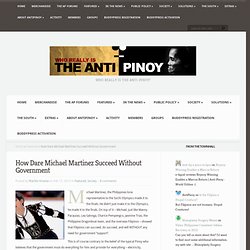 He didn’t just make it to the Olympics, he made it to the finals. On top of it – Michael, just like Manny Pacquiao, Lea Salonga, Charice Pempengco, Jasmine Trias, the Philippine Dragonboat team, and the overseas Filipinos – showed that Filipinos can succeed, do succeed, and will WITHOUT any need for government “support”. Home: Get Real Philippines!

Insult the philippines. Filipinos Are Very Sensitive About Criticism Of Their Country ****DISCLAIMER: If anyone has followed me online they know that I love Filipino culture as well as many various Asian cultures and promote them positively as I have an interest in the world at large. Even so, I am certain many Filipinos will react to this article in a bad way and claim that I am racist and troll me in the comments and be upset. Nothing can please those types of people. Shame On You Dan Brown, Fliplandia is On the Centre of Hell! You has offended my feelings Dan Brown for this racist book “Inferno”. Your pathetic, you go to hell for saying that. Anti-Pinoy Pride: Why Are Filipinos Proud to be Pinoy? This is not a blog that advocates discrimination. SUICIDE: A note to every Filipino.

'Do we really understand the growing problem of mental health crisis and suicide? If only we can take pause to listen and show someone that we care' Another 10 Pinoy Health Myths You Thought Were True. As children, we were taught never to mess with ant hills. If your feet swells or you get feverish, you definitely stepped on the forbidden mound and got cursed by the nuno sa punso. Also Read: Top 10 Pinoy Health Myths You Thought Were True (Part 1) 12 Annoying Attitudes of Filipinos We Need To Get Rid Of.