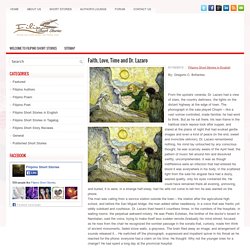 Brillantes From the upstairs veranda, Dr. Lazaro had a view of stars, the country darkness, the lights on the distant highway at the edge of town. The phonograph in the sala played Chopin – like a vast sorrow controlled, made familiar, he had wont to think. But as he sat there, his lean frame in the habitual slack repose took after supper, and stared at the plains of night that had evoked gentle images and even a kind of peace (in the end, sweet and invincible oblivion), Dr. Utos ng Hari. Ni Jun Cruz Reyes “See you in my cubicle after lunch.” 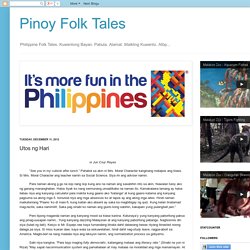 A Heritage of Smallness. Society for the Filipino is a small rowboat: the barangay. 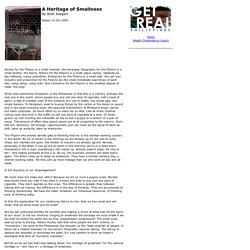 Geography for the Filipino is a small locality: the barrio. 10 Drama Clichés That Makes Watching Pinoy TV An Utter Joke. I would like to cherish all the remaining wonders of Philippine drama but then I remembered there was none. 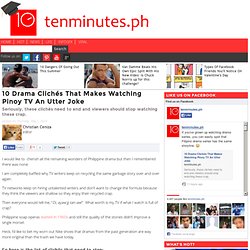 I am completely baffled why TV writers keep on recycling the same garbage story over and over again. TV networks keep on hiring untalented writers and don’t want to change the formula because they think the viewers are shallow so they enjoy their recycled crap. Then everyone would tell me, “Di, ayaw’g tan-aw!”.

What worth is my TV if what I watch is full of crap? Philippine soap operas started in 1960s and still the quality of the stories didn’t improve a single morsel. Heck, I’d like to bet my worn out Nike shoes that dramas from the past generation are way more original than the trash we have today. So here is the list of clichés that need to stop: (All pictures belong to their respective TV networks) Should we even have a ‘national language’ in the first place?

In our pursuit to develop and promote the use of a ‘national language,’ we should ask ourselves if we are simply trying hard to create a forced Filipino identity by speaking a forged language In school, I was taught that Tagalog was simply one of the many “dialects” in the Philippines. 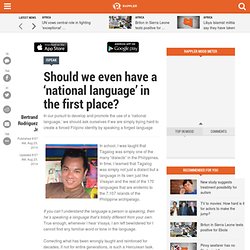 In time, I learned that Tagalog was simply not just a dialect but a language in its own just like Visayan and the rest of the 170 languages that are endemic to the 7,107 islands of the Philippine archipelago. If you can’t understand the language a person is speaking, then he’s speaking a language that’s totally different from your own. True enough, whenever I hear Visaya, I am left bewildered for I cannot find any familiar word or tone in the language. Correcting what has been wrongly taught and reinforced for decades, if not for entire generations, is such a Herculean task. My “Pilipino” teachers tried to inculcate in me how our “national language” back then was so beautiful and melodic.

DR JOSE RIZAL. 8 Reasons Why Pinoy Teleseryes Will Never Upgrade to Hollywood-Level. Let’s play a game: Think of a Pinoy teleserye, past or present, with a storyline that doesn’t revolve around a romantic relationship (a love triangle, most likely). 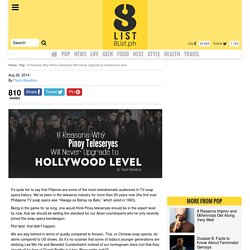 I know you’re thinking about superhero-themed dramas like “Darna” or fantasy shows like “Mulawin”. Still, I’d bet my bottom dollar that the plot, at the end of the day, is still a love story. Now think of foreign soap operas which are not romance-themed. I’d bet you came up with a lot. This is the greatest curse in the Pinoy teleserye landscape. Why not create a show that dwells on simple office politics? There has got be more stories out there for producers and writers to play with. In the mean time, keep belting those theme songs, Angeline. Old School Movies That Filipinos Should Be Proud Of. Honestly, I wish the Golden Era of Philippine cinema will come back. 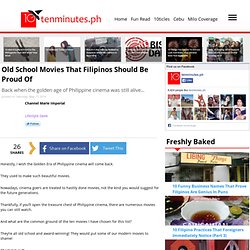 They used to make such beautiful movies. Nowadays, cinema goers are treated to hastily done movies, not the kind you would suggest for the future generations. Thankfully, if you’ll open the treasure chest of Philippine cinema, there are numerous movies you can still watch. And what are the common ground of the ten movies I have chosen for this list? They’re all old school and award-winning! Check ‘em out! Filipino Movie Monsters that Made it Difficult for You to Sleep at Night. Not everybody had TV back then so watching a movie on television was some kind of a special gathering among kids and kids at heart. 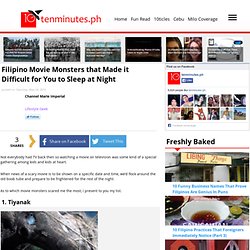 When news of a scary movie is to be shown on a specific date and time, we’d flock around the old boob tube and prepare to be frightened for the rest of the night. As to which movie monsters scared me the most, I present to you my list.