I.B.I Round Up post!! - OMONA THEY DIDN'T! Endless charms, endless possibilities ♥ For those of you who don't know, I.B.I is a project group with Produce 101 trainees, Lee Haein, Lee Suhyun, Yoon Chaekyung, Kim Sohee and Han Hyeri, produced by LOEN ent. 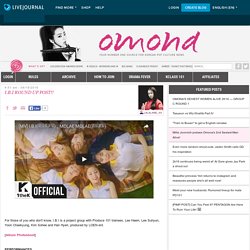 Fandom mess from Kai & Krystal dating has been immortalized in telenovela parody – Asian Junkie. People have been losing their minds recently over the Kai and Krystal relationship, which has surprisingly provided me with a lot of #TeamSchadenfreude content after a slow start. 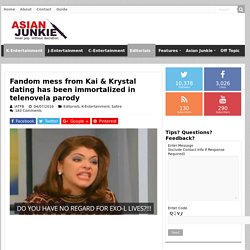 Thankfully, to the benefit of humanity, Asian Junkie commenter TheParanoidPotato has contributed to that content by delivering to us the peak of this mess to us in the form of a telenovela parody starring all the involved parties, including … well, us. A Look Into Netizens' Minds: Jung Chaeyeon of DIA & I.O.I - OneHallyu Blog! Jung Chaeyeon caused an uproar among K-Pop community when she was announced to endure double activities with two different acts; her original group DIA where she rejoined them after a temporary leave due to Produce 101 commitments and I.O.I, a group formed with best eleven trainees from Produce 101 where she was ranked 7th. 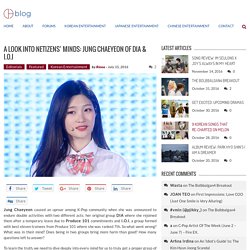 So what went wrong? What was in their mind? Does being in two groups bring more harm than good? How many questions left to answer? [VIDEO] 160809 IOI Sohye explaining her Penguin dance in ENGLISH! #아이오아이. Solar and her bra now in high quality for March 2016’s The Celebrity – Asian Junkie. A little over a week ago, I posted about how life is wonderful because Solar posed for March 2016’s The Celebrity in her bra. 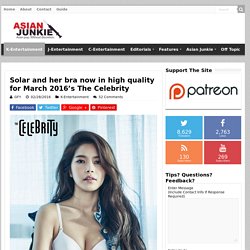 Well, life got more wonderful just recently, as now we have those pictures in high quality. Solar pounds Moonbyul’s pussy, scratches it, then takes a whiff – Asian Junkie. Sure sure, one would think that I was surely exaggerating the title for effect, but no, it’s simply a description of the day in the life of MAMAMOO, apparently. 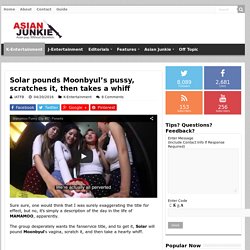 The group desperately wants the fanservice title, and to get it, Solar will pound Moonbyul‘s vagina, scratch it, and then take a hearty whiff. Fandom mess from Kai & Krystal dating has been immortalized in telenovela parody – Asian Junkie. Solar and her bra now in high quality for March 2016’s The Celebrity – Asian Junkie. 7 Ways K-Pop Is So Much More Than Just Music. F(x)’s fandom has fought for 7 years to be called ‘MeU’ (미유) – Asian Junkie. Family Guy - Candy Quahog Marshmallow. [Full HD] Sistar Touch My Body in Family Guy S14E10 - Candy, Quahog Marshmallow. 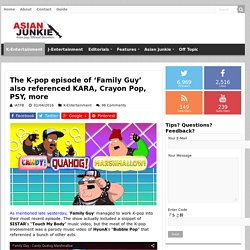 The show actually included a snippet of SISTAR‘s “Touch My Body” music video, but the meat of the K-pop involvement was a parody music video of HyunA‘s “Bubble Pop” that referenced a bunch of other acts. Aside from SISTAR and HyunA, there were also the dance moves of KARA‘s “Step“, Crayon Pop‘s “Bar Bar Bar“, and PSY‘s “Gangnam Style“. Additionally, there were the utterly pointless signs from “Ice Cream“. Hell, they even nailed the fashion. But SISTAR were the main recipients of legit airtime, being featured in real-life form twice in the episode. The episode also revolved around the Korean drama scene, and it pretty much scored on that as well. Yes, they are addictive. Netizens discuss why they hate international K-Pop fans. On September 17th KST, a post on a popular Korean online community called Instiz discussed why Korean fans despise international K-Pop fans. 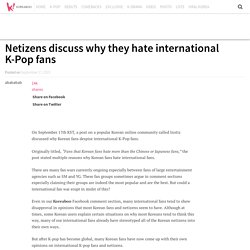 Originally titled, “Fans that Korean fans hate more than the Chinese or Japanese fans,” the post stated multiple reasons why Korean fans hate international fans. There are many fan wars currently ongoing especially between fans of large entertainment agencies such as SM and YG. These fan groups sometimes argue in comment sections especially claiming their groups are indeed the most popular and are the best. TOP 10 Sexiest Outfits Of Krystal Jung. F(x) is known for their bright and girlish image, with songs that are upbeat and inspiring.

But sometimes members such as Krystal appear on stage wearing some outfits that accentuate their toned bodies and highlight their sexy dance moves. 12 K-Pop Girls Tried Dressing Up As Men.. And The Results Will Shock You. KPop fans and stans: A deeper look into the Pinoy Hallyu fandom. To better understand the Filipino Hallyuwave fandom, imagine a group of five girls in a Korean restaurant: the young and enthusiastic ones, the dedicated fan artist, the event organizer and the 'retired' fan. 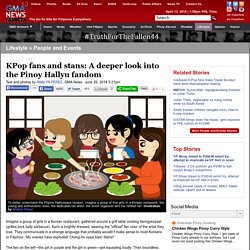 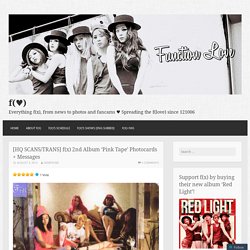 First Wisdom Tooth finally came out!! Please listen to it a lot without stopping~^^ ♥ “You won’t forget me easily…” _mq2totVKXR1qecento1_500. [ENG] 140830 SNL Korea S05E22 - Korean Language Outing (Jay Park Cut) What to Buy in Korea: 20 Awesome Gifts! - Seoulistic. Keith Blog, Travel to Korea, What to do in Korea 8 If you’re returning home from Korea, you will want to bring some cool Korean things. And you don’t want to wonder on your last day what gift to buy in Korea. [ENG] H.O.T Fanfic Skit @ SNL Korea.

4 Fan Fiction Tropes Found in K-Dramas. K Dramas and fan fiction share a lot of common ground. Both are filled with inexplicable plot twists and couples coming together against all odds. Both often act as a form of wish fulfillment and fantasy for the audience. And both skew towards the same young & female demographic. So it’s no surprise they share archetypes and tropes. Hitler cant go to SNSD Concert. Hitler learns that Jessica gets the boot off SNSD. Hitler cant go to SNSD Concert. Hitler reacts to SNSD's Deluxe First Press Limited Edition. Hitler Reacts to 10 Versions of SNSD's "I Got A Boy" Albums (Downfall parody) RHP#004: Hitler listens to Mr. Taxi by SNSD and orders all the albums, but Fegelein enters the scene.

Hitler watches a Gee Parody in Japan TV. Hitler Reacts to 10 Versions of SNSD's "I Got A Boy" Albums (Downfall parody) RHP#004: Hitler listens to Mr. Taxi by SNSD and orders all the albums, but Fegelein enters the scene. Want to Marry a Korean? Here's 7 Things You Should Know! - Seoulistic. Keith Blog, Korean Culture 83 So without him knowing it, you’ve been planning on marrying G-dragon for a whole year now.

And in your stalker mind, you’ve even dreamed up your own wedding! Well if it ever becomes a reality, make sure you know what’s expected of you if you’re marrying a Korean! (Weirdo :P) Note: This is a list of common expectations for when Koreans marry other Koreans. 1. So you’ve been dating that Korean for a while now and you’ve even got the whole Korean style proposal thing done. "'Cause you're in my city": Examining Seoul through K-pop. I was walking down the streets of histories I was weaving all the wasteful energies I see a million different faces in my dreams Can’t tell if it’s fake or reality-Love X Stereo, Soul City The enterprise of K-pop music is a highly geographical one: performers make their name through concentrated promotion in one of the world’s largest metropolises, Seoul.

Although domestic and international K-pop fans make pilgrimages to Seoul in hopes of seeing in more concrete terms the world their idols see – and maybe catching those idols on the street – we seldom hear from K-pop performers themselves about their environment. For many idols (and their lyricists), the city is barely noticeable in its ubiquitousness; it is “just life,” too specific and too quotidian to appeal to an audience of millions. Yet, space and place play an important role in shaping all of our lived realities: the kinds of activities we do, the beliefs we hold about ourselves and others, the dreams we aspire to. Quiz: What Kind of Korean Pop Culture Fan Are You? Sling around some Korean Slang. I overheard ajummas on the bus talking about a group of middle-schoolers who just had gotten off: “I didn’t understand a word of what they said.” Not surprising, because the teens’ conversation had been peppered with lots of slang; not just spoken slang, but also netspeak, which they had incorporated into their dialogue.

What I found interesting was that even the ajummas’ conversation had been full of slang; it was just different from what the kids were using. You cannot live without slang. It’s a part of everyday life. Language evolves endlessly with society, and at this fast pace of emerging new trends and social patterns, it is inevitable that language evolution picks up speed as well. Where did Sandara park go during her short stay in Philippines? During 2NE1's Dara's visit in the Philippines, she really took her time to spend a quality one with her old friends, on her mother station ABS-CBN, with Filipino Blackjacks and herself.

Tiffany & Nichkhun’s relationship means the crushed dreams of shippers … and they mad. So Tiffany and Nichkhun are dating, which is great for them and whatever for the rest of the sane world out there. Unfortunately (or fortunately for the lulz), there are shippers out there who are fucking pissed about this, as they shipped Nichkhun with Victoria (one shipper had legal action taken against her by JYPE) and Tiffany with Taeyeon. The Weird Relationship of EXO with Some of Their Sasaeng Fans. The Korean music industry is bigger than the Japanese these days. International fans vs. Korean fans. [Disclaimer : If you're looking for lulz this article is probably not for you.] Anti-Fans and so-called "Sasaeng"s. I just came across this really serious topic again through the CODE:EXO forum and several days ago I read some articles about that special kind of "fans".

Anti-Fan Death is Real? Dear Korean, Sasaeng Fans & How They Follow K-pop Stars (KWOW #69) I Love K-pop: It's All About the Music...Or Is It? - seoulbeats  7 Bizarre K-Pop Videos You Need to Watch Now - Feat. Simon and Martina - ISHlist 25. Kpop Music Mondays - 100th Episode Special! K-POP, part 1: YG, SM, JYP Entertainment & their Founders (KWOW #38) The ugly reality of kpop idol auditions. Getting by in Korea Without Knowing Korean. 10 Things You Can Do ONLY in Korea! Keith Blog, What to do in Korea 12 If you’re planning your trip to Korea and have only shopping and eating on your list… pretty good choices. 101 Things to Do in Seoul – Huge Bucket List! A Guide to Fanfiction and Gag Concert. I know you were so lonely these past few days, without our DICKS to keep you company.

'You only like Korean idols because (insert weird assumption here)': being branded as a 'K-pop fan' Why Useless Skills Matter — Happenchance. I Love Korean Boys: The Problem of Fetishization. 101 Korean pop culture words you absolutely MUST know. K-Pop for Dummies: The Idols Edition.