S Summary Overview of TWICE Tzuyu's Nationality Scandal — Koreaboo. Posted on This week has been tough for 16-year old TWICE member Tzuyu after an innocent action became a political out roar in Asia. 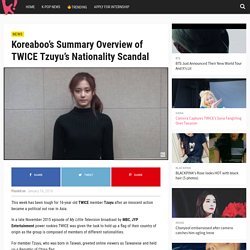 In a late November 2015 episode of My Little Television broadcast by MBC, JYP Entertainment power rookies TWICE was given the task to hold up a flag of their country of origin as the group is composed of members of different nationalities. For member Tzuyu, who was born in Taiwan, greeted online viewers as Taiwanese and held up a Republic of China flag. Following the broadcast, Taiwanese and China-based singer Huang An took to his Weibo where he accused Tzuyu of being an Taiwanese independence activist, calling her a traitor.

Mainland China government (People’s Republic of China) considers Taiwan under its jurisdiction though many of the islanders considers themselves independent from them, representing themselves as the Republic of China. 14 Korean Celebrities in 100 Most Beautiful but it doesn't matterBeyond Hallyu. Once again, the TC Candler annual list of the world’s most beautiful faces has been released. 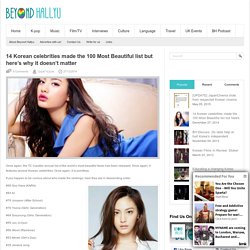 Once again, it features several Korean celebrities. 2014: The Year Of #TeamSchadenfreude – Asian Junkie. I wanted to publish this recap during the dead period between Christmas and New Year’s Day, but the way 2014 went, I was hesitant to assume nothing major would happen during that time. 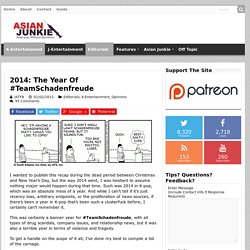 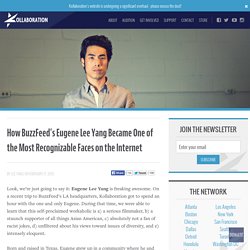 On a recent trip to BuzzFeed’s LA headquarters, Kollaboration got to spend an hour with the one and only Eugene. During that time, we were able to learn that this self-proclaimed workaholic is a) a serious filmmaker, b) a staunch supporter of all things Asian American, c) absolutely not a fan of racist jokes, d) unfiltered about his views toward issues of diversity, and e) intensely eloquent. Born and raised in Texas, Eugene grew up in a community where he and his family were the only Asian faces among a sea of whites, Blacks, and Latinos. To see any Asians he had to go to the Korean church, 45 minutes away by car. As a child, Eugene was sensitive and introspective, and often expressed himself through artistic outlets: from visual arts and illustration, to theater, choir, and dance. 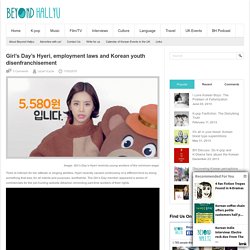 Tired of criticism for her attitude or singing abilities, Hyeri recently caused controversy of a different kind by doing something that was, for all intents and purposes, worthwhile. The Girl’s Day member appeared a series of commercials for the job-hunting website Albamon reminding part-time workers of their rights. From Korea with Love. A few hours before Christmas Eve, I was still at work. 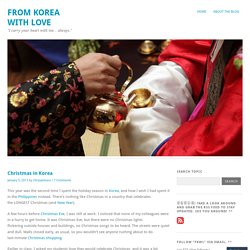 I noticed that none of my colleagues were in a hurry to get home. It was Christmas Eve, but there were no Christmas lights flickering outside houses and buildings, no Christmas songs to be heard. The streets were quiet and dull. The Dilemma of Giving Gifts in South Korea. Every time there is a special occasion in South Korea, our stress over money begins. 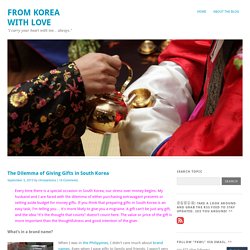 My husband and I are faced with the dilemma of either purchasing extravagant presents or setting aside budget for money gifts. If you think that preparing gifts in South Korea is an easy task, I’m telling you… it’s more likely to give you a migraine. A gift can’t be just any gift, and the idea “it’s the thought that counts” doesn’t count here. Watch?v=Lo1KCQy_MXE&feature=youtu. SNL Korea - GTA Joseon & Kyung sung Eng. Sub. Smart Young Folk – Teaching English in Asia is not so easy for graduates anymore. Nov 06, 2014 Lizzie Parker International 1 Comment Photograph: Renato Ganoza/Flickr For a long time graduates in Scotland, and other English speaking countries, have viewed teaching English in Asia as an easy way to fund travel after leaving university. 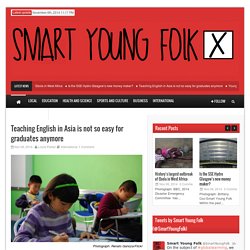 But this may be starting to come to an end. Over the couple of decades the job market for native English speaking ESL teachers in North East and South East Asia has exploded. Starting with Japan in the 80s, the demand for English teachers has spread all across North East Asia to South Korea, Hong Kong, Taiwan and China increasingly to South East Asian countries like Thailand and Vietnam.

With schools often looking for little more than a Batchelor’s degree and citizenship of an English-speaking country, teaching in Asia has gained a reputation among young graduates as an easy way to travel while making money. Signs advertising private academies (known as hagwons) can be seen throughout Seoul. Understanding Racism in Korea - Seoulistic. Understanding Racism in Korea Keith Blog, Korean Culture 163 We recently posted a video that discussed anti-Japanese sentiment in Korea. 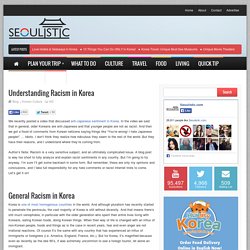 In the video we said that in general, older Koreans are anti-Japanese and that younger people are not as racist. And then we got a flood of comments from Korean netizens saying things like “You’re wrong! I hate Japanese people!” Fruit Names in Korean Infographic - Dom & Hyo. Actually, learning many of the fruits are pretty easy because they sound almost the same in English. 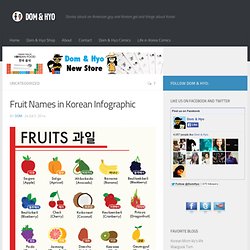 The pronunciation has just been “Koreanized”. Korean Slang Infographic - Dom & Hyo. Know Your Korean Months & Holidays with this Simple Infographic - Dom & Hyo. Know your Kimbap: 12 Popular Varieties - Dom & Hyo. 10 Korean Desserts You Must Try! (KWOW#30) Korean Comics for Adults. Phrases - Personal. Utopia Does Not Exist: Debt and Fantasy in Korean Dramas. Korean dramas are a fantasy space. They don’t show the world we live in but the world we wish we could access. The underdog conquers all obstacles; the painfully average person achieves greatness. Love is always true and good always wins. The poor gain opulent wealth without surrendering their soul to the corporate world. K-drama characters get the good fortune we wish would come to us. MBC, The Vilification of Foreigners, and Hallyu. MBC, The Vilification of Foreigners, and Hallyu Written by Dana On June 12, 2012 Let’s call a spade a spade: South Korea’s non-Korean residents, whether they be English teachers, soldiers, workers, students, or even Korean citizens who in some way do not fit the mold of the “typical,” do not always have the easiest time in the country.

For a citizenry that prides itself on racial purity and unity, the addition of diversity and multiculturalism can be a bit too much to swallow. Netizens Bitching About Naeun's Admission Into Dongguk University. I guess after pulling a Shinbot and scheduling seven articles for the Fancam Appreciation series, I guess I should return to AKF's roots of discussing why I think certain opinions are retarded. Okay, I guess fancams are in AKF's roots too. Anyway, the basis of this post is the NB article regarding Naeun's admission into Dongguk University.

Korea’s “Pali-pali” Culture and It’s Dynamism. We had to call the restaurant twice to ask why the delivery was taking so long. (The restaurant is just a few minutes away from our apartment.) We were told that it was a busy day and they had only one person to make deliveries. My husband didn’t argue nor cancel the order, though he was hungry as a bungry, but my hyeongnim did. (You know how it is with women. ^^) I am not trying to make a big fuss about the incident, but that was the first time I have experienced a delay in Korea.

That doesn’t usually happen here. THE KOREAN WON: History of Money (KWOW #78) All you need to know about KOREAN NAMES! (KWOW #67) Kim, Park And Lee: Why Do Koreans Have So Few Surnames? Notice a pattern? In a phenomenon that may be completely unique to the Korean culture – which comprise some 75 million people who live on the Korean peninsula, and another 7 million in the global diaspora -- only three surnames, Kim, Lee and Park, account for the appellations of nearly one-half of all Koreans. According to South Korea’s National Statistical Office, the most popular Korean surnames after those first “big three” are: Choi, Jeong, Kang, Yoon, Jang and Shin. Cal Poly Pomona. Yeobo~ Jagi~ Korean terms of endearment.

What do you call your husband or wife, life partner? “Honey”? Is it Expensive Living in Korea? It's all in your blood: Korean blood type superstitions. If you’re going to South Korea, it’s worth knowing your blood type. Korean Food Etiquette. Are You a Fat and Ugly Foreigner? Sexism in Korea. Korea's Problem is Modernity. I recently finished reading Daniel Tudor's Korea: the Impossible Country. (My review of the book is available at Reading Korea.) 11 ways Korea has changed over the past decade. Rising Suicide Rates in South Korea. Why? // YOLO in Korean (KWOW #66) The Pressures of the South Korean Education System. According to a recent survey , South Korean children are the least happy in the developed world – and the reason behind this could be the pressures of the education system they are subjected to. South Korea - The Suicide Capital of the World. South Korea is richer, more stable and more influential that it has ever been, but as the country rapidly developed and became ever more prosperous, suicide rates climbed to give South Korea the nickname of ‘suicide capital of the world’.

There was a time when South Korea had one of the lowest suicide rates in the world, but as the country thrived, the mounting pressures have seemed to have become overwhelming for some South Korean citizens. Variety's Role in Hallyu: Going Beyond Idol Vehicles - seoulbeats