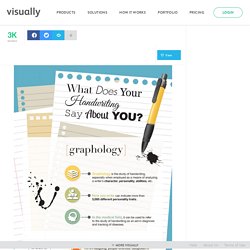 Graphology Graphology is the study of handwriting, especially when employed as a means of analyzing a writer's character, personality, abilities, etc. How you write can indicate more than 5,000 different personality traits. In the medical field, it can be used to refer to the study of handwriting as an aid in diagnosis and tracking diseases. size large letters You are out-going, people oriented, outspoken & love attention. Small letters You are shy or withdrawn, studious, concentrated and meticulous. average You are well-adjusted and adaptable spacing between words wide spacing You enjoy your freedom and don't like to be overwhelmed or crowded narrow spacing You can't stand to be alone. Slanting No Slant You don't let your emotions get the best of you.

Slants to the right You are open to new experiences & enjoy meeting new people. Slants to the left You tend to keep to yourself and generally like to work behind the scenes. Shape of the letters Rounded letters Open. 10 Paradoxical Traits Of Creative People. Editor's Note: This is one of the most-read leadership articles of 2013. 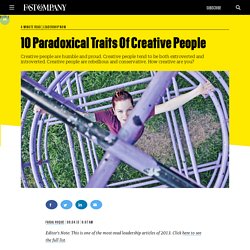 Click here to see the full list. I frequently find myself thinking about whether I am an artist or an entrepreneur. I am simply trying my best to create my own unique path. It is safe to say that more and more entrepreneurs are artists, and artists of all kinds are entrepreneurs. And the trend is only on the rise as all things (art, science, technology, business, culture, spirituality) are increasingly converging. Creativity is the common theme that drives both entrepreneurs and artists alike. Over this past Labor Day weekend, I found myself reading excerpts from distinguished professor of psychology and management Mihaly Csikszentmihalyi’s (pronounced me-HIGH chick-sent-me-HIGH-ee) seminal book Creativity: The Work and Lives of 91 Eminent People (HarperCollins, 1996). He writes: Mihaly describes ten traits often contradictory in nature, that are frequently present in creative people. The Alignment System - Chaotic Good. A chaotic good character acts as his conscience directs him with little regard for what others expect of him. 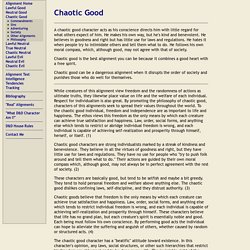 He makes his own way, but he's kind and benevolent. He believes in goodness and right but has little use for laws and regulations. He hates it when people try to intimidate others and tell them what to do. He follows his own moral compass, which, although good, may not agree with that of society. Chaotic good is the best alignment you can be because it combines a good heart with a free spirit. Chaotic good can be a dangerous alignment when it disrupts the order of society and punishes those who do well for themselves. While creatures of this alignment view freedom and the randomness of actions as ultimate truths, they likewise place value on life and the welfare of each individual. Chaotic good characters are strong individualists marked by a streak of kindness and benevolence. These characters are basically good, but tend to be selfish and maybe a bit greedy. 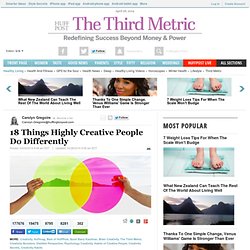 Creative thinking is a stable, defining characteristic in some personalities, but it may also change based on situation and context. Inspiration and ideas often arise seemingly out of nowhere and then fail to show up when we most need them, and creative thinking requires complex cognition yet is completely distinct from the thinking process. Neuroscience paints a complicated picture of creativity.

As scientists now understand it, creativity is far more complex than the right-left brain distinction would have us think (the theory being that left brain = rational and analytical, right brain = creative and emotional). In fact, creativity is thought to involve a number of cognitive processes, neural pathways and emotions, and we still don't have the full picture of how the imaginative mind works. While there's no "typical" creative type, there are some tell-tale characteristics and behaviors of highly creative people.