The dirty truth about Doritos: What you’re really eating on Super Bowl Sunday. The word “doritos” is supposedly pidgin Spanish for “little bits of gold.” 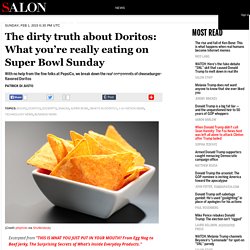 The main ingredient in these bits of gold is heated and steeped in an alkaline solution, usually lye or lime. This frees up the corn’s niacin and restructures some of its amino acids, leading to better protein quality. Vegetable Oil Each chip is nearly 29 percent fat by weight, and almost all of that is corn oil, sunflower oil, or soybean oil. That’s good, because fat activates the brain’s natural mu-opioid receptors, provoking what scientists call a hedonic response; you want to eat more fat, which makes a stronger hedonic response, which makes you want to eat more fat, and . . . dude, don’t bogart the bag! 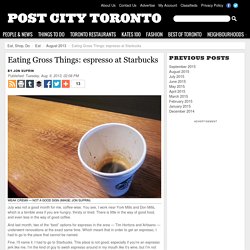 You see, I work near York Mills and Don Mills, which is a terrible area if you are hungry, thirsty or tired. There is little in the way of good food, and even less in the way of good coffee. And last month, two of the “best” options for espresso in the area — Tim Hortons and Artisano — underwent renovations at the exact same time. Fine, I’ll name it. Many people think espresso is supposed to be mostly bitter, but a good shot is a thing of balanced beauty. Starbucks espresso was a good candidate for this column.

I have felt this way about Starbucks for a long time. This is how KFC actually makes its fried chicken from beginning to end. Global Food Disparity: A Photo Diary. In an increasingly globalized world, it’s still sometimes shocking to see just how disparate our lives are compared with other human beings around the world. A book of photographs by Peter Menzel called "Hungry Planet: What the World Eats" ("©Peter Menzel www.menzelphoto.com. Ten Speed Press, published in 2005) makes a relevant point with great irony: at a time when hundreds of millions of people don't have enough to eat, hundreds of millions more are eating too much and are overweight or obese.

In observing what six billion eat for dinner the authors note, "Today, more people are overweight than underweight. " It is these cultural differences, emphasized and reinforced by the author, which exemplifies the lifestyles and dietary habits of people around the world. You can buy the book here. Meet the The Manzo family of Sicily.

Germany: The Melander family of Bargteheide Food expenditure for one week: 375.39 Euros or $500.07. Food cravings engineered by industry - Health. Standing in her kitchen in downtown Toronto chopping vegetables for dinner, Pat Guillet is aware she has entered the battleground. "Whenever you go grocery shopping, or into your kitchen, you're in a war zone. You have to really be prepared before you go in," she said. She decides, in advance, exactly what she's going to eat, and she forces herself to stick to the plan. Because she knows she is just one sweet mouthful away from a descent back into hell. Pat Guillet is a food addict. "I ate to the point it hurt to move. Craving. They know you will be back, because they've done the research necessary to make it happen.

"These companies rely on deep science and pure science to understand how we're attracted to food and how they can make their foods attractive to us," Michael Moss said. The New York Times investigative reporter spent four years prying open the secrets of the food industry’s scientists. Hypoglycaemia and Migraine. Migraine Fact Sheets Hypoglycaemia is the medical condition of having an abnormally low blood sugar (glucose) level, and can be responsible for triggering or exacerbating migraines and headaches. 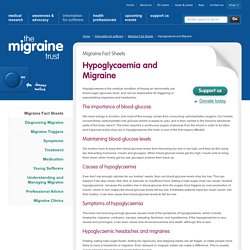 The importance of blood-glucose We need energy to function, and most of this energy comes from consuming carbohydrates (sugars). Our bodies convert these carbohydrates into glucose (which is easier to use), and is then carried in the blood to whichever parts of the body need it. The brain requires a continuous supply of glucose from the blood in order to function, and if glucose levels drop (as in hypoglycaemia) the brain is one of the first organs affected.