8 high-wire via ferratas to give you vertigo. You don’t need to be a top climber, or own a lot of equipment, but you can have a lot of fun on hikes by giving a via ferrata a go – providing you have a head for heights. 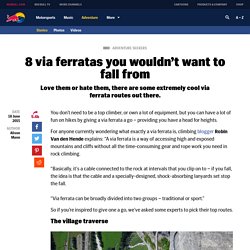 For anyone currently wondering what exactly a via ferrata is, climbing blogger Robin Van den Hende explains: “A via ferrata is a way of accessing high and exposed mountains and cliffs without all the time-consuming gear and rope work you need in rock climbing. “Basically, it's a cable connected to the rock at intervals that you clip on to – if you fall, the idea is that the cable and a specially-designed, shock-absorbing lanyards set stop the fall. “Via ferrata can be broadly divided into two groups – traditional or sport.” So if you’re inspired to give one a go, we’ve asked some experts to pick their top routes.

These 18 Hidden Gems In Florida Will Blow You Away. For anyone sick of hearing Florida is just Walt Disney World, this list is for you. 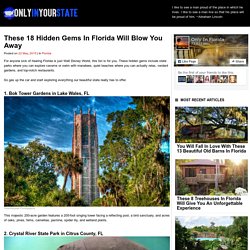 These hidden gems include state parks where you can explore caverns or swim with manatees, quiet beaches where you can actually relax, verdant gardens, and top-notch restaurants. So gas up the car and start exploring everything our beautiful state really has to offer. 1. Bok Tower Gardens in Lake Wales, FL. 9 Unique Places To Stay In Florida For An Unforgettable Trip. Florida is one of the top vacation destinations in the country, but who wants to stay in a boring old normal hotel for the millionth time? 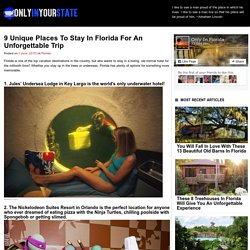 Whether you stay up in the trees or underseas, Florida has plenty of options for something more memorable. 1. Jules’ Undersea Lodge in Key Largo is the world’s only underwater hotel! 2. 41 Adventures To Add To Your Bucket List. The Best Thru-Hikes for 2015 (That Aren't the PCT) These trails are less crowded and sometimes epically longer than the Appalachian or Pacific Crest Trails. 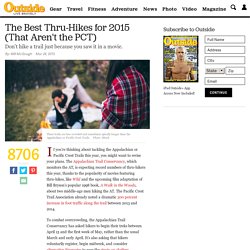 Photo: iStock If you’re thinking about tackling the Appalachian or Pacific Crest Trails this year, you might want to revise your plans. The Appalachian Trail Conservancy, which monitors the AT, is expecting record numbers of thru-hikers this year, thanks to the popularity of movies featuring thru-hikes, like Wild and the upcoming film adaptation of Bill Bryson’s popular 1998 book, A Walk in the Woods, about two middle-age men hiking the AT. The Pacific Crest Trail Association already noted a dramatic 300 percent increase in foot traffic along the trail between 2013 and 2014. To combat overcrowding, the Appalachian Trail Conservancy has asked hikers to begin their treks between April 15 and the first week of May, rather than the usual March and early April. Great Eastern Trail The Great Eastern Trail remains one of the country’s best-kept secrets.

North Country Trail Desert Trail. The Best Short(er) Thru-Hikes in America. 11,000mi: Riding a motorcycle to the end of the world. The World’s Most Dangerous Hiking Trail. As wonderful as Chinese tea is, it is definitely not something you’d closely associate with exhilaration, adrenaline and the fear of death. 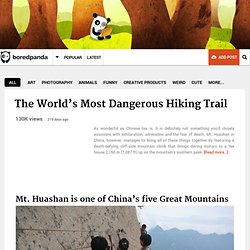 Mt. Huashan in China, however, manages to bring all of these things together by featuring a death-defying cliff-side mountain climb that brings daring visitors to a tea house 2,160 m (7,087 ft) up on the mountain’s southern peak. [Read more...] Mt. Huashan has been a place of religious importance since at least the 2nd century BCE, when a Daoist temple was established at its base. The paths have been reinforced due to a recent influx of tourists, but they are nonetheless dangerous, and carry a reputation for fatal falls. The surrounding area is fascinating as well. Source: travelchinaguide.com Mt. Image credits: masterok.livejournal.com Some parts of the mountain are a little steep Image credits: ahycenko.blogspot.com The area has been considered holy since at least the 2nd century BCE Image credits: Aaron Feen Image credits: tynan.com. Images from HIGHLINERS. High-lining: Balance in Nature. Top 8 Ultra-Long Distance Adventure Runs. It's just you and the open trail, in some of the most breathtaking settings you could imagine. 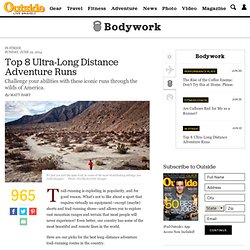 Photo: Hardin56/Getty Images Trail-running is exploding in popularity, and for good reason. What’s not to like about a sport that requires virtually no equipment—except (maybe) shorts and trail running shoes—and allows you to explore vast mountain ranges and terrain that most people will never experience? Even better, our country has some of the most beautiful and remote lines in the world. Here are our picks for the best long-distance adventure trail-running routes in the country. Wonderland Trail Mount Rainier National Park, Washington (93 miles, 24,000 feet of ascent) Idaho Bucket List: The 75 Things All Idahoans Should Try (At Least Once) Idaho's nearly 84,000 square miles of breathtaking views, rugged terrain, and unique landmarks mean the Gem State is rife with recreation and site-seeing options. 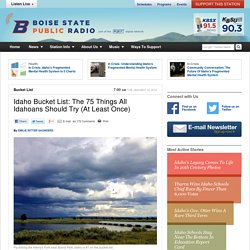