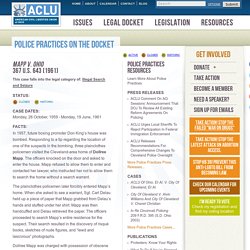 Ohio 367 U.S. 643 (1961) This case falls into the legal category of: Illegal Search and Seizure. Mapp v. Ohio (1961) - Bill of Rights Institute. Mapp v. Ohio. " . . . our holding that the exclusionary rule is an essential part of both the Fourth and Fourteenth Amendments is not only the logical dictate of prior cases, but it also makes very good sense. 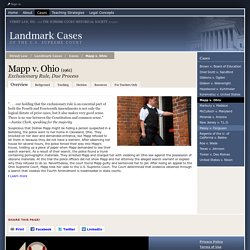 There is no war between the Constitution and common sense. " —Justice Clark, speaking for the majority Suspicious that Dollree Mapp might be hiding a person suspected in a bombing, the police went to her home in Cleveland, Ohio. They knocked on her door and demanded entrance, but Mapp refused to let them in because they did not have a warrant. United States Courts.