From then until now: A look at Detroit's corrupt political past. A lot of you are probably happy that disgraced Detroit Mayor Kwame Kilpatrick is going to spend most of his life in federal prison. 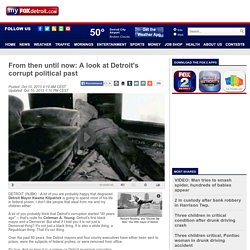 I don't like people that steal from me and my children either. A lot of you probably think that Detroit's corruption started "40 years ago" -- that's code for Coleman A. Young, Detroit's first black mayor and a Democrat. But what if I told you it is not just a Democrat thing? It's not just a black thing. Over the past 80 years, five Detroit mayors and four county executives have either been sent to prison, were the subjects of federal probes, or were removed from office. It's true. The year was 1929, Republican Charles E. On the night of his removal, Jerry Buckley, a popular radio show host who bitterly fought for Bowles' removal, was shot dead from the hotel lobby from where he broadcast. Kilpatrick isn't even the biggest corruption scandal to rock Detroit. As Detroit breaks down, scourge of arson burns out of control. The Face of Pension Reform: Detroit Firefighters Lament Potential Cuts.

In February 2007, Walt Grysko was barreling through the streets of Detroit en route to a fire when his firetruck was t-boned by a car exceeding 70 miles per hour. 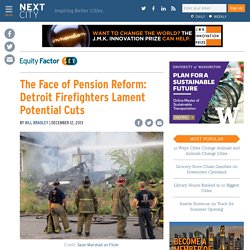 The crash sent Grysko through the windshield and hurled him 60 feet away, breaking his back in five places. The firetruck’s driver, 47-year-old Joe Torkos, died. Grysko, now 57, retired in 2008 on doctor’s orders after serving the Motor City for 25 years. This summer, Detroit fire and police department retirees received notice that their benefits would be cut at the end of the year and that they would be given a small monthly stipend, ranging from $125 to $200, to find their own health care. The end date has since been extended to February 28, 2014. Fellow Detroit firefighter Brendan Milewski was hit with a chunk of limestone when a building his crew was tending to collapsed in August 2010. “We’ve heard speculation of 16 cents on the dollar,” he told me. From California to Chicago, pension reform is on the way. For Detroit, a Crisis Born of Bad Decisions and False Hope.

Some factors were out of the city’s control. 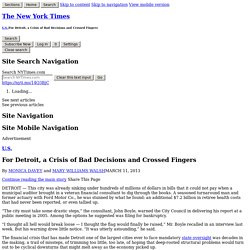 As auto industry jobs moved elsewhere over the decades, for example, Detroit lost much of its affluent tax base. Lower than expected state revenue sharing did not help, nor did corruption allegations in the administration of Kwame M. Kilpatrick, a mayor who resigned in 2008 and was convicted on Monday of racketeering and other federal charges. But recent findings from a state-appointed review team and interviews with past and present city officials also suggest a city that over the years was remarkably badly run. The state review team found in recent months that the city’s main courthouse had $280 million worth of uncollected fines and fees. “This was bad decisions piled on top of each other,” Gary Brown, the Detroit City Council president pro tem, said the other day. Photo Once the nation’s fourth-largest city, Detroit had grown up around the auto industry, booming right along with it in the 1950s.

Mr. Continue reading the main story. Detroit’s Emergency Manager Offers Dire Report on City. DETROIT — An emergency manager assigned to lead this city back from the brink of financial ruin has taken his first detailed look at Detroit’s woes, and the picture of debt and disarray he paints may be bleaker even than earlier grim portrayals. 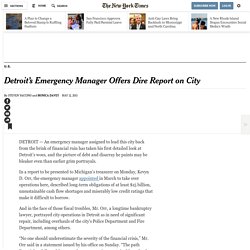 In a report to be presented to Michigan’s treasurer on Monday, Kevyn D. Orr, the emergency manager appointed in March to take over operations here, described long-term obligations of at least $15 billion, unsustainable cash flow shortages and miserably low credit ratings that make it difficult to borrow. And in the face of those fiscal troubles, Mr. Orr, a longtime bankruptcy lawyer, portrayed city operations in Detroit as in need of significant repair, including overhauls of the city’s Police Department and Fire Department, among others. “No one should underestimate the severity of the financial crisis,” Mr. The account from Mr. “It’s not as bad as what they’re trying to make it out to be,” Edward L. Photo In his filing for the state, Mr.