HopSkipDrive Smartphone App That Lets Parents Book Drivers For Their Child Run Gets 10M Dollar. AT&T Q4 Takeaway: Mexico DirecTV Postpaid Accounting Guidance. BT Broadband And Phone Network Suffers Major Outage Across UK. BT’s broadband and phone network has suffered an outage across the UK, and its customer services phone lines are out of action – leaving many of its customers having to turn to Twitter to get answers as to why they’re experiencing difficulties. 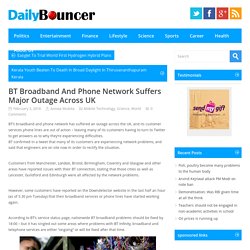 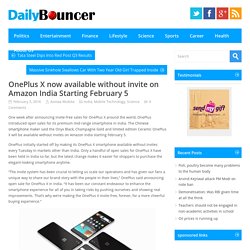 The Chinese smartphone maker said the Onyx Black, Champagne Gold and limited edition Ceramic OnePlus X will be available without invites on Amazon India starting February 5. Xperia Z5 And Xperia Z5 Compact Arrive In US. Folks in the United States have had to wait for a long time to get their hands on Sony’s current flagship. 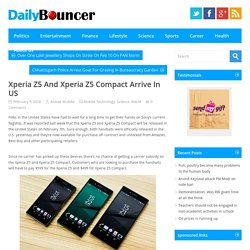 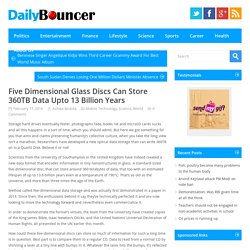 But here we got something for you that aims and claims preserving humanity’s collective culture, when you take the long view isn’t a marathon. Researchers have developed a new optical data storage than can write 360TB on to a Quartz Disk. Believe it or not! Scientists from the University of Southampton in the United Kingdom have indeed created a new data format that encodes information in tiny nanostructures in glass. A standard-sized five-dimensional disc, that can store around 360 terabytes of data, that too with an estimated lifespan of up to 13.8 billion years even at a temparature of 190°C. 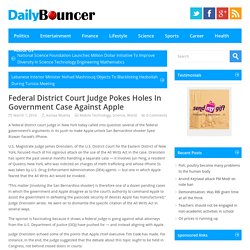 U.S. Magistrate Judge James Orenstein, of the U.S. District Court for the Eastern District of New York, focused much of his vigorous attack on the use of the All Writs Act in the case. Orenstein has spent the past several months handling a separate case — it involves Jun Feng, a resident of Queens, New York, who was indicted on charges of meth trafficking and whose iPhone 5s was taken by U.S. Drug Enforcement Administration (DEA) agents — but one in which Apple feared that the All Writs Act would be invoked. The opinion is fascinating because it shows a federal judge is going against what attorneys from the U.S. Judge Orenstein echoed some of the points that Apple chief executive Tim Cook has made. Now Send Whatsapp Messages Without The Internet Check Tricks. A new message on the WhatsApp shows that now your device will be supporting the ultra-light Wi-Fi technology and you do not require any data connection or internet connection for running your WhatsApp any longer. 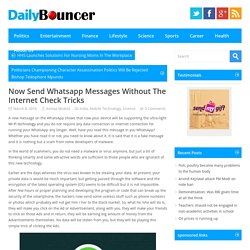 Well, have you read this message in you WhatsApp? Whether you have read it or not, you need to know about it. Sony Launches New Base Heavy Bluetooth Headphones In India. Sony India unveiled MDR-XB650BT in a vast array of colours: Black, Blue and Red. 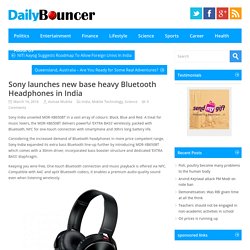 Keeping you wire-free, One-touch Bluetooth connection and music playback is offered via NFC. Compatible with AAC and aptX Bluetooth codecs, it enables a premium audio quality sound even when listening wirelessly. The headphones have been designed specifically to enhance the playback for deep bass. Apple May Design Its Own Servers To Prevent Unauthorized Snooping. We’ve known for roughly two years the US government has programs devoted to intercepting computer hardware mid-shipment. 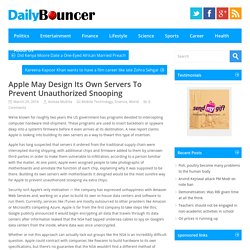 These programs are used to insert backdoors or spyware deep into a system’s firmware before it even arrives at its destination. A new report claims Apple is looking into building its own servers as a way to thwart this type of insertion. Apple has long suspected that servers it ordered from the traditional supply chain were intercepted during shipping, with additional chips and firmware added to them by unknown third parties in order to make them vulnerable to infiltration, according to a person familiar with the matter. Facebook Messenger Dropboxes The Mic For Easy File Sharing.

Not content to let Facebook’s new chatbots do all the talking on Messenger, today it was announced that the Facebook platform would share a deeper integration with file-sharing service Dropbox. 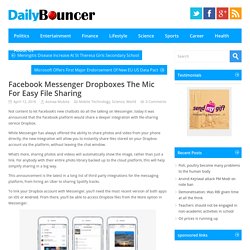 While Messenger has always offered the ability to share photos and video from your phone directly, the new integration will allow you to instantly share files stored on your Dropbox account via the platform, without leaving the chat window. What’s more, sharing photos and videos will automatically show the image, rather than just a link. For anybody with their entire photo library backed up to the cloud platform, this will help simplify sharing in a big way. Google Launches Chromecast Audio In India. Google on Wednesday launched the new Chromecast and Chromecast Audio in India. 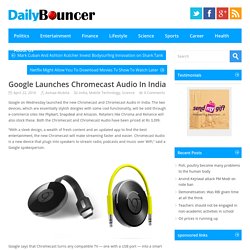 The two devices, which are essentially stylish dongles with some cool functionality, will be sold through e-commerce sites like Flipkart, Snapdeal and Amazon. Retailers like Chroma and Reliance will also stock these. Netflix Might Allow You To Download Movies Tv Show To Watch Later. Raise your hand if you’ve ever fantasized about Netflix making offline viewing a reality.

The feature would let users preload a bunch of Netflix movies and TV shows to their devices to watch later without the need for a network connection, you’ll be happy to hear that the company is considering the possibility. When asked about offline streaming during the company quarterly earnings call on Monday, Netflix CEO Reed Hastings said the company is considering this streaming option. Netflix Might Allow You To Download Movies Tv Show To Watch Later. Huawei P9 Lite With Kirin 650 Octa-Core SoC Launched In Germany. Samsung is working on a new virtual reality headset. Samsung is working on a virtual reality headset more along the lines of the Oculus Rift and HTC Vive.Samsung’s head of R&D for software and services Injong Rhee revealed the plans during a conference in San Francisco yesterday. “We are working on wireless and dedicated VR devices, not necessarily working with our mobile phone,” Rhee said.

Online shopping has a advantages like they deliver the product to your door.