Australian Cricketer Mitchell Starc delays surgery to ensure he returns this summer. Mitchell Starc managed nine brief but impressive overs at the Adelaide Oval, capturing 3-24, before suffering a stress fracture of the third metatarsal of his right foot and limping to the boundary. 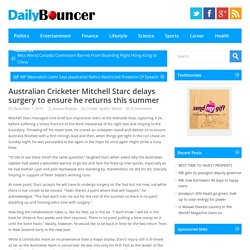 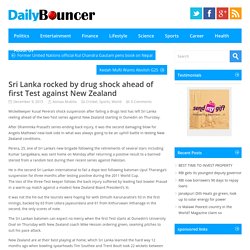 After Dhammika Prasad’s series-ending back injury, it was the second damaging blow for Angelo Mathews’ new-look side in what was always going to be an uphill battle in testing New Zealand conditions. Perera, 25, one of Sri Lanka’s new brigade following the retirements of several stars including Kumar Sangakkara, was sent home on Monday after returning a positive result to a banned steroid from a random test during their recent series against Pakistan. He is the second Sri Lankan international to fail a dope test following batsman Upul Tharanga’s suspension for three months after testing positive during the 2011 World Cup. Kiwis enjoy 122-run win as Sri Lanka fold. New Zealand secured a 122-run win in the first Test on Monday as Sri Lankan resistance folded with the loss of seven wickets on the final day. 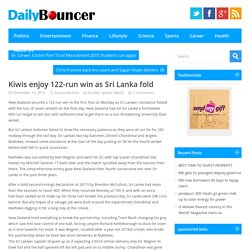 New Zealand had set Sri Lanka a formidable 405-run target to win but with sufficient time to get there on a non-threatening University Oval wicket. But Sri Lanka’s batsmen failed to show the necessary patience as they were all out for for 282 midway through the last day. Sri Lanka’s two top batsmen, Dinesh Chandimal and Angelo Mathews, showed some resistance at the start of the day putting on 56 for the fourth wicket before both fell in quick succession. Axar Patel Determined to Prove Sunil Gavaskar Criticism Wrong. Left-arm spinner Axar Patel has taken Sunil Gavaskar’s stinging criticism in his stride and says he is determined to prove the former India captain wrong with consistent performances, starting with the five ODIs in Australia next month. 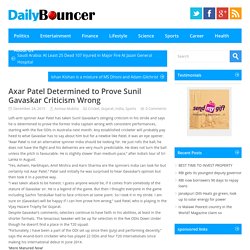 Any established cricketer will probably pay heed to what Gavaskar has to say about him but for a newbie like Patel, it was an eye opener. “Axar Patel is not an alternative spinner India should be looking for. He just rolls the ball, he does not have the flight and his deliveries are very much predictable. He does not turn the ball unless the pitch is favourable. He is slightly slower than medium pace,” after India’s tour of Sri Lanka in August. Ishan Kishan is a mixture of MS Dhoni and Adam Gilchrist. When India’s under-19 squad will travel to Bangladesh for the World Cup, the team’s reins will be in the hands of 17-year-old Ishan Kishan. 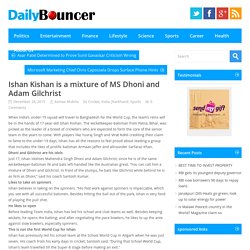 The wicketkeeper-batsman from Patna, Bihar, was picked as the leader of a breed of cricketers who are expected to form the core of the senior team in the years to come. With players like Yuvraj Singh and Virat Kohli crediting their claim to fame to the under-19 days, Ishan has all the reasons to feel proud about leading a group that includes the likes of prolific batsman Armaan Jaffer and allrounder Sarfaraz Khan.Dhoni and Gilchrist are his idols Just 17, Ishan idolises Mahendra Singh Dhoni and Adam Gilchrist, since he is of the same wicketkeeper-batsman ilk and bats left-handed like the Australian great. Sarfaraz Khan Armaan Jaffer Excited To Learn The Tricks Of The Trade From Rahul Dravid. Young batsman Sarfaraz Khan, selected in the India Under 19 World Cup squad, said on Monday he has learnt a lot from former Test cricketer Rahul Dravid and looks forward to get more tips from the legend. 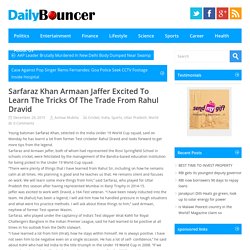 Sarfaraz and Armaan Jaffer, both of whom had represented the Rizvi Springfield School in schools cricket, were felicitated by the management of the Bandra-based education institution for being picked in the Under 19 World Cup squad. Virender Sehwag Was Hurt By His Ouster From India Team. Legendary opener Virender Sehwag on Wednesday admitted that he was “hurt” after being dropped in the middle of the 2013 Test series against Australia without any “communication from team management or selectors.” 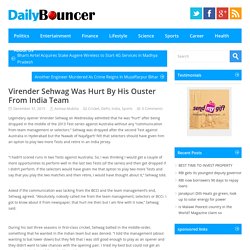 Sehwag was dropped after the second Test against Australia in Hyderabad but the ‘Nawab of Najafgarh’ felt that selectors should have given him an option to play two more Tests and retire in an India jersey. “I hadn’t scored runs in two Tests against Australia. So, I was thinking I would get a couple of more opportunities to perform well in the last two Tests (of the series) and then get dropped if I didn’t perform. If the selectors would have given me that option to play two more Tests and say that you play the two matches and then retire, I would have thought about it,” Sehwag told.

Asked if the communication was lacking from the BCCI and the team management’s end, Sehwag agreed. Pranav Dhanawade Joins Cricket Grand Club Of One. West Indies climb to No. 1 in T20 rankings. West Indies have claimed the No 1 spot in the ICC T20 rankings after Sri Lanka, who had largely occupied the top rung since they won the World T20 in 2014, were caned by New Zealand in Auckland on Sunday. 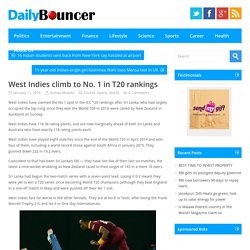 West Indies have 118.36 rating points, and are now marginally ahead of both Sri Lanka and Australia who have exactly 118 rating points each. West Indies have played eight matches since the end of the World T20 in April 2014 and won four of them, including a world record chase against South Africa in January 2015. They gunned down 232 in 19.2 overs. Coincident to that has been Sri Lanka’s fall — they have lost five of their last six matches, the latest a nine-wicket drubbing as New Zealand raced to their target of 143 in a mere 10 overs. Sri Lanka had begun the two-match series with a seven-point lead. West Indies fare far worse in the other formats. Virat Kohli Pakistani Fan Faces 10 Year Jail For Hoisting Indian Flag. Indian Cricketer Irfan Pathan Married Saudi Arabian Model Safa Baig In Mecca. 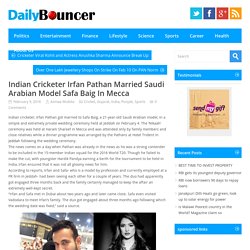 The ‘Nikaah’ ceremony was held at Haram Shareef in Mecca and was attended only by family members and close relatives while a dinner programme was arranged by the Pathans at Hotel Trident in Jeddah following the wedding ceremony. Hong Kong Coach Simon Cook Slams Oman Bowler Aamir Kaleem For Cowardly Act. Oman and and Hong Kong aren’t the first two countries that spring to mind when the term “cricketing powerhouse” is mentioned, but their match has still caused quite a stir. 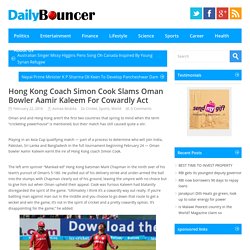 Playing in an Asia Cup qualifying match — part of a process to determine who will join India, Pakistan, Sri Lanka and Bangladesh in the full tournament beginning February 24 — Oman bowler Aamir Kaleem earnt the ire of Hong Kong coach Simon Cook. The left arm spinner “Mankad-ed” Hong Kong batsman Mark Chapman in the ninth over of his team’s pursuit of Oman’s 5-180. Kings XI Punjab Shaun Marsh Out Of IPL With Back Injury. Left-handed opener Shaun Marsh today joined the long list of Australian cricketers, who all have pulled out of the cash-rich Indian Premier League tournament. Bahadur Singh Dhoni Hopes To Meet Cricketer MS Dhoni One Day. The informed shouts of ‘Dhoni, Dhoni’ filled a atmosphere when he was awarded a second esteem during a Kolkata Marathon in Kolkata on Sunday, though a male in doubt was not a Indian cricket skipper MS Dhoni though a curtain named Bahadur Singh Dhoni.

Like Mahendra Singh Dhoni, whose ancestral home is in Almora, Uttarakhand, BS Dhoni also hails from a same state. “I’m a large fan of Dhoni and when people ask me about him it unequivocally is a unapproachable impulse for me and a community. He is an impulse to many all over a world. He’s a best to lead group India and I’m certain with him as a captain we will win a World Twenty20. The 28-year-old runner, who clocked dual hour, 30 mins and 47 seconds en track to finishing second behind his Army Sports Institute teammate Mohammad Yunus, pronounced his usually passion is running. Five Things Know About IPL 2016 Indian Player Pawan Negi. To say that Pawan Negi has undoubtedly proved to be the biggest surprise of the VIVO IPL 2016 auction, would be an understatement.Negi has yet to play for India, although he has just been named in the Indian squad for the ICC World T20. One would have been justified in expecting him to be sold for somewhat higher than his modest asking price of Rs 30 lakhs.

Cricket is as exciting to hear as it is to watch.