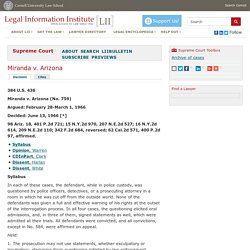 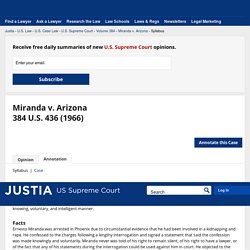 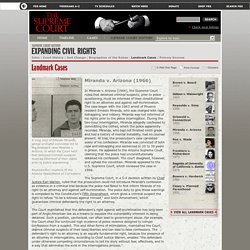 Arizona, in which the Court held that detained criminal suspects must be informed of their rights prior to police questioning. Reproduction courtesy of the Arizona Department of Corrections. Miranda v. Arizona. Chief Justice Earl Warren delivered the opinion of the 5-4 majority. 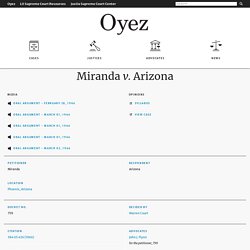 The Supreme Court held that the Fifth Amendment’s protection against self-incrimination is available in all settings. Therefore, prosecution may not use statements arising from a custodial interrogation of a suspect unless certain procedural safeguards were in place. Such safeguards include proof that the suspect was aware of his right to be silent, that any statement he makes may be used against him, that he has the right to have an attorney present, that he has the right to have an attorney appointed to him, that he may waive these rights if he does so voluntarily, and that if at any points he requests an attorney there will be no further questioning until the attorney arrives.

Justice Tom C. Clark wrote a dissenting opinion in which he argued that the majority’s opinion created an unnecessarily strict interpretation of the Fifth Amendment that curtails the ability of the police to effectively execute their duties. Facts and Case Summary - Miranda v. Arizona. Facts The Supreme Court’s decision in Miranda v. 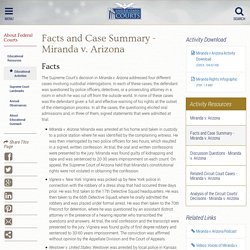