Gambling addictions expert warns of dangers of internet gambling, especially on youth. Participating in an online March Madness bracket or fantasy sport league is harmless fun for most people, but for someone with a gambling addiction, it can be a dangerous temptation. 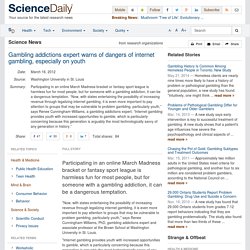 "Now, with states entertaining the possibility of increasing revenue through legalizing internet gambling, it is even more important to pay attention to groups that may be vulnerable to problem gambling, particularly youth," says Renee Cunningham-Williams, PhD, gambling addictions expert and associate professor at the Brown School at Washington University in St. 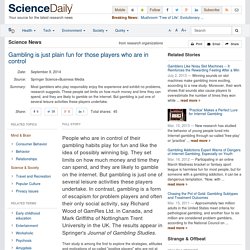 They set limits on how much money and time they can spend, and they are likely to gamble on the internet. But gambling is just one of several leisure activities these players undertake. In contrast, gambling is a form of escapism for problem players and often their only social activity, say Richard Wood of GamRes Ltd. in Canada, and Mark Griffiths of Nottingham Trent University in the UK. The results appear in Springer's Journal of Gambling Studies. Their study is among the first to explore the strategies, attitudes and motivations of so-called "positive players" who are not at risk of becoming problem gamblers.

Most previous harm-minimization research has focused on the negative aspects of problem gambling and uses a "stick" approach (i.e. don't play like this or else!). A terrifying parable of the addictive power of internet gambling: It began with a £5 online bet. Then this ex-Major gambled away £750,000 - and his family. Justyn Larcombe, 44 started gambling in September 2009 and is now in £100,000 debtBegan working from home to devote his time to his online addictionNeglected his son while he checked his bets and sold baby's christening spoon to pay off debtAt the height of his addiction, was spending seven hours a day on gambling websitesWas forced to move back in with 70-year-old mother after losing his home By Alice Azania Jarvis Published: 21:10 GMT, 16 August 2013 | Updated: 22:21 GMT, 16 August 2013 Four years ago, Justyn Larcombe’s life was little short of perfect. 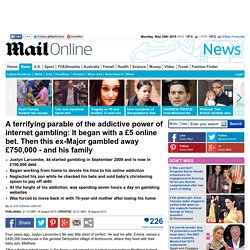 He and his wife, Emma, owned a £450,000 townhouse in the genteel Derbyshire village of Ashbourne, where they lived with their baby son, Matthew. After a distinguished career in the Army — he served as a patrol commander in Northern Ireland and a Major during the Kosovo crisis — Justyn had moved into finance, earning a six-figure salary at a boutique insurance broking firm in the City of London. The reason? ‘I hate losing anything. How safe is gambling on the internet? - Online Gambling Safety. 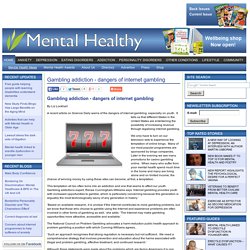 It tells us that different States in the United States are entertaining the possibility of increasing revenue through legalising internet gambling. We only have to turn on our television sets to experience the temptation of online bingo. Many of our most popular programmes are sponsored by bingo companies. This temptation all too often turns into an addiction and one that seems to affect our youth. ‘Based on available research, it is unclear if the Internet contributes to more gambling problems, but we know that those who choose to gamble using the Internet and experience problems are often involved in other forms of gambling as well,’ she adds. 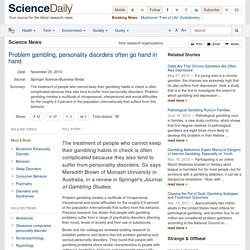 So says Meredith Brown of Monash University in Australia, in a review in Springer's Journal of Gambling Studies. Problem gambling creates a multitude of intrapersonal, interpersonal and social difficulties for the roughly 2.3 percent of the population internationally that suffers from this behavior. Previous research has shown that people with gambling problems suffer from a range of psychiatric disorders affecting their mood, levels of anxiety and their use of substances. Brown and her colleagues reviewed existing research to establish patterns and factors that link problem gambling and various personality disorders. Online gambling a bigger risk than you think: Column. Online gambling might be coming to a computer near you, and while it may seem like the only risk is on the player, the FBI fears it will be used by terrorists and organized crime rings to launder money. 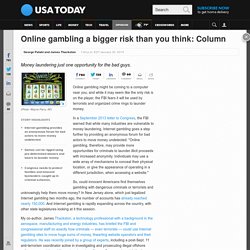 In a September 2013 letter to Congress, the FBI warned that while many industries are vulnerable to money laundering, Internet gambling goes a step further by providing an anonymous forum for bad actors to move money undetected: "Online gambling, therefore, may provide more opportunities for criminals to launder illicit proceeds with increased anonymity. Individuals may use a wide array of mechanisms to conceal their physical location, or give the appearance of operating in a different jurisdiction, when accessing a website.

" So, could innocent Americans find themselves gambling with dangerous criminals or terrorists and unknowingly help them move money? Dangerous gambles that could leave you penniless. Many of us like a bet from time to time but for a small number of people gambling can turn from a fun activity to a dangerous addiction. 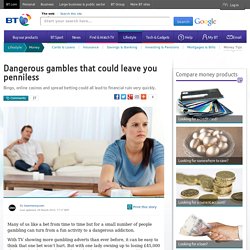 With TV showing more gambling adverts than ever before, it can be easy to think that one bet won’t hurt. But with one lady owning up to losing £45,000 playing online bingo and an Irish teacher losing £280,000 spread betting, it’s easier to get into trouble than you might think. Here are some hobbies that can become very costly very quickly if you let them get out of hand. Online bingo Kelly Field from St Helens ran up a £45,000 debt after becoming addicted to online bingo. Field started to play when she was off work sick and turned to the internet to pass the time. Her addiction became so bad that she began to have suicidal thoughts and turned to self-harm.

Online casinos and spread betting Field isn’t the only problem gambler to tell her story to the media. Online Gambling: A Dangerous Play. If you’re a curious kid itching to try your luck at gambling, just open up your laptop. 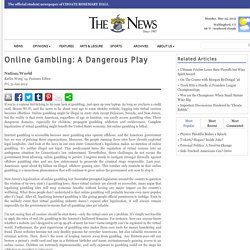 As long as you have a credit card, decent Wi-Fi, and the nerve to lie about your age to some sketchy website, logging into virtual casinos becomes effortless.