Marijuana Lifestyle & Cannabis News. Introduction to the Endocannabinoid System - NORML.org - Working to Reform Marijuana Laws. Dustin Sulak, DO Healer.com As you read this review of the scientific literature regarding the therapeutic effects of cannabis and cannabinoids, one thing will become quickly evident: cannabis has a profound influence on the human body. 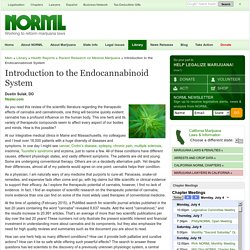 This one herb and its variety of therapeutic compounds seem to affect every aspect of our bodies and minds. How is this possible? At our integrative medical clinics in Maine and Massachusetts, my colleagues and I treat over 18,000 patients with a huge diversity of diseases and symptoms. High-tech marijuana: The science & profit of cannabis composition. How potent is pot? 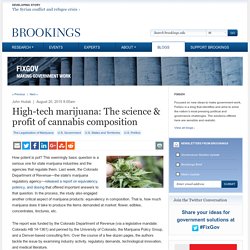 This seemingly basic question is a serious one for state marijuana industries and the agencies that regulate them. Last week, the Colorado Department of Revenue—the state's marijuana regulatory agency—released a report on equivalency, potency, and dosing that offered important answers to that question. Handbook of Cannabis. How academics can engage with policy: 10 tips for a better conversation. 'How to' guides for academics are often statements of the obvious and abstract to the point of being meaningless. 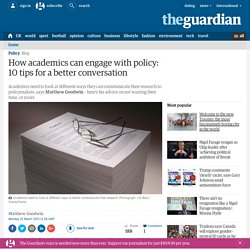 The default position: as soon as academics leave the office, they find themselves lost in Narnia, where they know nothing much about anything beyond their research. But there are useful and practical exceptions, such as Phil Cowley's recent posts on why and how academics should engage with the media. Another area of growing importance is policy engagement. Having just finished a six-month ESRC knowledge exchange secondment with a government department, I wanted to share some observations about how we academics might better engage with policy: 1) Only do it if you believe it is important Seriously. Only engage with policymakers if you believe it is a valuable exercise in its own right. 2) Engage in genuine knowledge exchange Academics are often tokenistic when it comes to knowledge exchange. 3) Prepare for a different type of conversation.

CSP - 'The Long Trip: The Prehistory of Psychedelia' by Paul Devereux. Religion and Psychoactive Sacraments: An Entheogen Chrestomathy Thomas B. 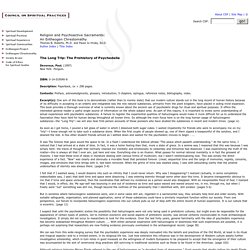 Roberts, Ph.D. and Paula Jo Hruby, Ed.D. Author Index | Title Index The Long Trip: The Prehistory of Psychedelia Devereux, Paul. (1997) New York: Penguin. Description: Paperback, xx + 298 pages. Contents: Preface, acknowledgments, glossary, introduction, 5 chapters, epilogue, reference notes, bibliography, index. Excerpt(s): One aim of this book is to demonstrate (rather than to merely state) that our modern culture stands out in the long record of human history because of its difficulty in accepting in an orderly and integrated way the role natural substances, primarily from the plant kingdom, have played in aiding mind expansion. As soon as I got home, I poured a tall glass of water in which I dissolved both sugar cubes. 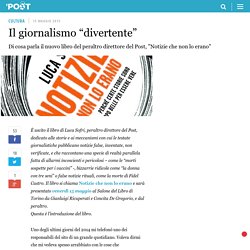 A young woman walks into a laboratory. 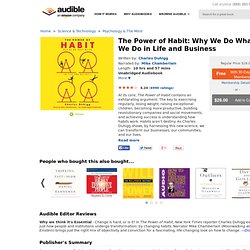 Over the past two years, she has transformed almost every aspect of her life. She has quit smoking, run a marathon, and been promoted at work. The patterns inside her brain, neurologists discover, have fundamentally changed. Marketers at Procter & Gamble study videos of people making their beds. They are desperately trying to figure out how to sell a new product called Febreze, on track to be one of the biggest flops in company history. An untested CEO takes over one of the largest companies in America. What do all these people have in common? In The Power of Habit, award-winning New York Times business reporter Charles Duhigg takes us to the thrilling edge of scientific discoveries that explain why habits exist and how they can be changed.