Sales Tax Rates in Major U.S. Cities. Sales taxes in the United States are levied not only by state governments but also by city, county, Native American, and special district governments. 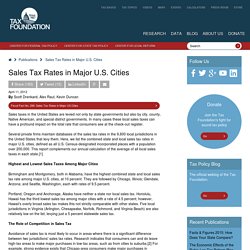 In many cases these local sales taxes can have a profound impact on the total rate that consumers see at the check-out register. Several private firms maintain databases of the sales tax rates in the 9,600 local jurisdictions in the United States that levy them. Here, we list the combined state and local sales tax rates in major U.S. cities, defined as all U.S. Census-designated incorporated places with a population over 200,000. This report complements our annual calculation of the average of all local sales taxes in each state.[1] Highest and Lowest Sales Taxes Among Major Cities Birmingham and Montgomery, both in Alabama, have the highest combined state and local sales tax rate among major U.S. cities, at 10 percent. Portland, Oregon and Anchorage, Alaska have neither a state nor local sales tax. Colorado Sales Tax and Job Creation from MMJ - Sensible Colorado. Medical marijuana revenues in Colorado for 2012: $199 million-plus.

Tuesday, June 4, 2013 | 2 years ago Legislators working on bills pertaining to Amendment 64 nearly passed a repeal measure aimed at retail sales of recreational pot in part over fears that taxes modest enough for voters to approve might not cover costs. 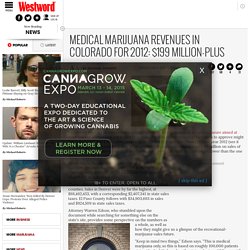 But a document revealing retail sales and state sales taxes in fiscal year 2012 (see it below) suggest such concerns may be misplaced. Medical marijuana revenues in Colorado in 2013: $328 million-plus - Denver. Wednesday, January 15, 2014 | 1 year ago After peaking for 2013 at 112,862 patients in August, the state medical marijuana registry went into a two-month decline, losing more than 2,000 patients by November, when the total was 110,785 registered medical marijuana users. 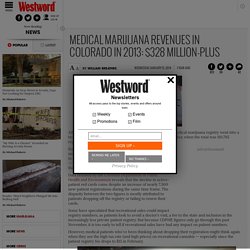 But even if the overall numbers are lower, the amount of money spent by MMJ patients is considerable. According to State of Colorado figures, the total topped $328 million -- well over $100 million more than the figure reported for the previous year. Data released by the Colorado Department of Public Health and Environment reveals that the decline in active-patient red cards came despite an increase of nearly 7,500 new-patient registrations during the same time frame.

The disparity between the two figures is mostly attributed to patients dropping off the registry or failing to renew their cards. Medical Marijuana Sales Tax and Revenue for Colorado 2012. Denver Open Data Catalog: Marijuana Sales Tax. Medical-marijuana sales tax nets $2.2 million for Colorado this year. By John IngoldThe Denver Post Posted: 11/23/2010 01:00:00 AM MST|Updated: 4 years ago Medical-marijuana dispensaries are now putting hundreds of thousands of dollars a month into state and city treasuries in Colorado. 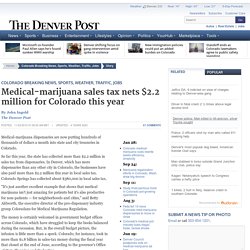 So far this year, the state has collected more than $2.2 million in sales tax from dispensaries. In Denver, which has more dispensaries than any other city in Colorado, the businesses have also paid more than $2.2 million this year in local sales tax. Colorado Springs has collected about $380,000 in local sales tax. "It's just another excellent example that shows that medical marijuana isn't just amazing for patients but it's also productive for non-patients — for neighborhoods and cities," said Betty Aldworth, the executive director of the pro-dispensary industry group Coloradans for Medical Marijuana Regulation. The money is certainly welcomed in government budget offices across Colorado, which have struggled to keep the books balanced during the recession. Sales and Use Tax Revenue Reports. Town of Breckenridge : Monthly Tax Revenue and Analyses. We have updated the format of our tax reports! 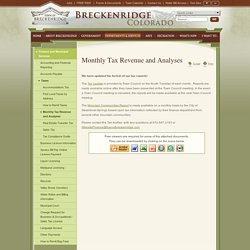 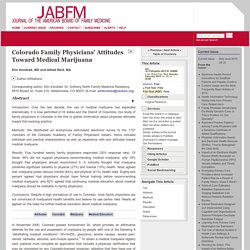 Anthony North Family Medicine Residency, 8510 Bryant St, Suite 210, Westminster, CO 80031 (E-mail: elinkondrad@centura.org). Abstract Introduction: Over the last decade, the use of medical marijuana has expanded dramatically; it is now permitted in 16 states and the District of Columbia. Our study of family physicians in Colorado is the first to gather information about physician attitudes toward this evolving practice. Methods: We distributed an anonymous web-based electronic survey to the 1727 members of the Colorado Academy of Family Physicians' listserv. 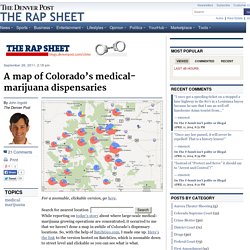 While reporting on today’s story about where large-scale medical-marijuana growing operations are concentrated, it occurred to me that we haven’t done a map in awhile of Colorado’s dispensary locations. So, with the help of BatchGeo.com, I made one up. Here’s the link to the version hosted on BatchGeo, which is zoomable down to street level and clickable so you can see what is what. The map includes nearly every (see caveat #2 below) location of a dispensary or a marijuana-infused product maker — known in the business as a MIP — in Colorado. Dispensaries are also broken down into types 1, 2 and 3.

Big picture? The metro area also continues to dominate the scene, with Denver alone having close to 400 dispensaries and MIPs. Couple caveats with the map: 1.