Anomalous Monism. First published Tue Nov 8, 2005; substantive revision Mon Oct 22, 2012 Anomalous Monism is a theory about the scientific status of psychology, the physical status of mental events, and the relation between these issues developed by Donald Davidson. 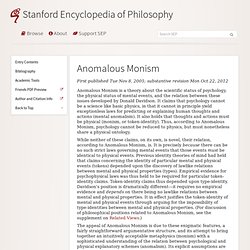 It claims that psychology cannot be a science like basic physics, in that it cannot in principle yield exceptionless laws for predicting or explaining human thoughts and actions (mental anomalism). It also holds that thoughts and actions must be physical (monism, or token-identity). Thus, according to Anomalous Monism, psychology cannot be reduced to physics, but must nonetheless share a physical ontology.

While neither of these claims, on its own, is novel, their relation, according to Anomalous Monism, is. 1. The basic structure of the argument for Anomalous Monism is as follows. The Interaction Principle: Some mental events causally interact with some physical events 2. 2.1 Mental and Physical Events 2.2 Mental Causation. Propositional Attitude Reports > The De Re/De Dicto Distinction. Propositional attitude verbs seem to be examples of what we can call opacity verbs. 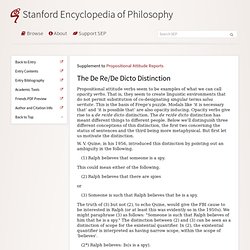 That is, they seem to create linguistic environments that do not permit substitution of co-designating singular terms salva veritate. This is the basis of Frege's puzzle. Modals like ‘it is necessary that’ and ‘it is possible that’ are also opacity inducing. Opacity verbs give rise to a de re/de dicto distinction. The de re/de dicto distinction has meant different things to different people. W. . (1) Ralph believes that someone is a spy. This could mean either of the following. (2) Ralph believes that there are spies or (3) Someone is such that Ralph believes that he is a spy. The truth of (3) but not (2), to echo Quine, would give the FBI cause to be interested in Ralph (or at least this was evidently so in the 1950s) . (2*) Ralph believes: ∃x(x is a spy). In (3), however, the existential quantifier has wide scope and binds a variable that occurs freely within the scope of ‘believes'. (15) ‘Henry’ has 5 letters.

Michael Shermer: What Is Skepticism, Anyway? TED and The Huffington Post are excited to bring you TEDWeekends, a curated weekend program that introduces a powerful "idea worth spreading" every Friday, anchored in an exceptional TEDTalk. 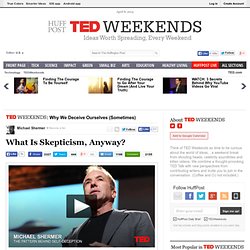 This week's TEDTalk is accompanied by an original blog post from the featured speaker, along with new op-eds, thoughts and responses from the HuffPost community. Watch the talk above, read the blog post and tell us your thoughts below. Become part of the conversation! As the publisher of Skeptic magazine I am often asked what I mean by skepticism, and if I'm skeptical of everything or if I actually believe anything.

Magnum Photos History of Magnum. There had been both emotional and physical excesses. 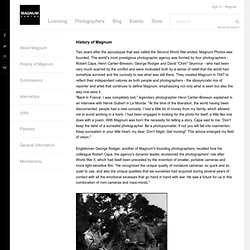 Rodger, noted for his pictures of the Blitz and the liberation of Bergen-Belsen, had had to walk "three hundred miles through the bamboo forest and what seemed like a thousand mountain ranges" to escape the Japanese in Burma. He would give up war photography forever after finding himself "getting the dead into nice photographic compositions" upon entering the concentration camp. Cartier-Bresson spent much of the war as a German prisoner and, after escaping on his third try, in the French Resistance. Polish-born David Seymour (known as "Chim"), who received a medal for his work in American intelligence, had lost his parents to the Nazis (his father was a publisher of Hebrew and Yiddish books).