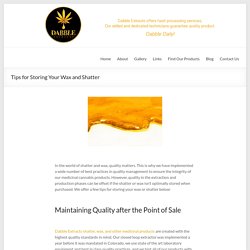 This is why we have implemented a wide number of best practices in quality management to ensure the integrity of our medicinal cannabis products. However, quality in the extraction and production phases can be offset if the shatter or wax isn’t optimally stored when purchased. We offer a few tips for storing your wax or shatter below: Dabble Extracts shatter, wax, and other medicinal products are created with the highest quality standards in mind.

Our closed loop extractor was implemented a year before it was mandated in Colorado, we use state of the art laboratory equipment and best in class quality practices, and we test all of our products with our lab partners at Phytatek and Gobo labs to ensure the integrity of our shatter and wax. However, when you purchase quality shatter and wax from a dispensary, this is only part of the equation to enjoying the medicinal qualities of the shatter or wax. Five Jobs You Can Find in the Marijuana Industry. There’s no question that the marijuana industry is booming. 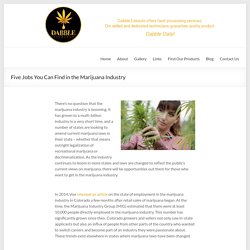 It has grown to a multi-billion industry in a very short time, and a number of states are looking to amend current marijuana laws in their state – whether that means outright legalization of recreational marijuana or decriminalization. As the industry continues to boom in more states and laws are changed to reflect the public’s current views on marijuana, there will be opportunities out there for those who want to get in the marijuana industry. In 2014, Vox released an article on the state of employment in the marijuana industry in Colorado a few months after retail sales of marijuana began. At the time, the Marijuana Industry Group (MIG) estimated that there were at least 10,000 people directly employed in the marijuana industry. This number has significantly grown since then. No matter your education or work history, you may be able to find a job. Research Indicates that Americans Are Becoming More Open to Marijuana. Are Americans softening their stance against marijuana? 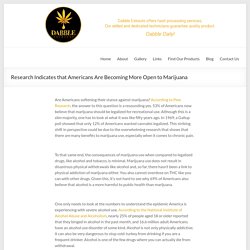 According to Pew Research, the answer to this question is a resounding yes. 53% of Americans now believe that marijuana should be legalized for recreational use. Although this is a slim majority, one has to look at what it was like fifty years ago. In 1969, a Gallup poll showed that only 12% of Americans wanted cannabis legalized. This striking shift in perspective could be due to the overwhelming research that shows that there are many benefits to marijuana use, especially when it comes to chronic pain. To that same end, the consequences of marijuana use when compared to legalized drugs, like alcohol and tobacco, is minimal. One only needs to look at the numbers to understand the epidemic America is experiencing with severe alcohol use.

Yet, we see alcohol everywhere. What Are Some Common Misconceptions of Dabbing? A Dab is a given quantity of a wax-like concentrates that contain up to 90% THC. 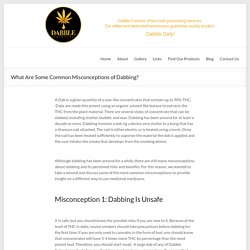 Dabs are made this potent using an organic solvent like butane to extracts the THC from the plant material. There are several styles of concentrate that can be dabbed, including shatter, budder, and wax. Dabbing has been around for at least a decade or more. Dabbing involves a dab rig a device very similar to a bong that has a titanium nail attached. The nail is either electric or is heated using a torch. Although dabbing has been around for a while, there are still many misconceptions about dabbing and its perceived risks and benefits.

Misconception 1: Dabbing Is Unsafe It is safe, but you should know the possible risks if you are new to it. Misconception 2: Concentrates Can Be Made at Home The dangers of dabbing have more to do with the extraction than their use. Misconception 2: Dabbing Should Only Be Used Recreationally This couldn’t be further from the truth. The Importance of Pesticide and Solvent Testing for Marijuana Extracts. Marijuana products are flourishing in many states, as more and more people become aware of their beneficial medical applications. 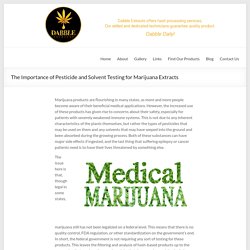 However, the increased use of these products has given rise to concerns about their safety, especially for patients with severely weakened immune systems. This is not due to any inherent characteristics of the plants themselves, but rather the types of pesticides that may be used on them and any solvents that may have seeped into the ground and been absorbed during the growing process. Both of these substances can have major side effects if ingested, and the last thing that suffering epilepsy or cancer patients need is to have their lives threatened by something else. The issue here is that, though legal in some states, marijuana still has not been legalized on a federal level. This means that there is no quality control, FDA regulation, or other standardization on the government’s end. Concentrate vs. Flower - Culture Magazine. As time goes on, it seems that more and more patients, recreational users and legislators are leaning towards concentrated cannabis vs. actual flower. 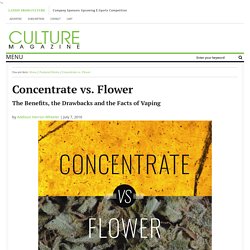 The new trend in legalization is to allow only vaping—no smoking, and many patients prefer vaping because it gives the needed medical dose in a quick and easy way. Similarly, recreational users favor it because they want to be able to vape discretely and save their lungs from inhaling unnecessary plant matter. But is this really the future of cannabis, or is an all-synthetic cannabis landscape problematic?

According to a recent study by Chief Medical Officer Perry Solomon of HelloMD, legal consumer sales data indicates that 66 percent of people enjoy vaping and 71 percent prefer smoking the herb. The study also indicated that it is our younger generations that prefer vaping to smoking flower more frequently than older generations.