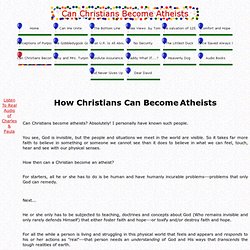 Absolutely! I personally have known such people. You see, God is invisible, but the people and situations we meet in the world are visible. So it takes far more faith to believe in something or someone we cannot see than it does to believe in what we can feel, touch, hear and see with our physical senses. How then can a Christian become an atheist? For starters, all he or she has to do is be human and have humanly incurable problems---problems that only God can remedy.

Next... He or she only has to be subjected to teaching, doctrines and concepts about God (Who remains invisible and only rarely defends Himself) that either foster faith and hope---or toxify and/or destroy faith and hope. This is a perfect example of why scientists don't vote Republican. Poll: Big Bang a big question for most Americans - Yahoo News. WASHINGTON (AP) — While scientists believe the universe began with a Big Bang, most Americans put a big question mark on the concept, an Associated Press-GfK poll found. 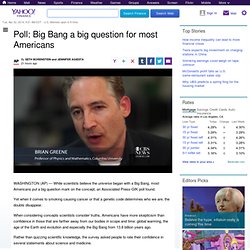 Yet when it comes to smoking causing cancer or that a genetic code determines who we are, the doubts disappear. When considering concepts scientists consider truths, Americans have more skepticism than confidence in those that are farther away from our bodies in scope and time: global warming, the age of the Earth and evolution and especially the Big Bang from 13.8 billion years ago. Rather than quizzing scientific knowledge, the survey asked people to rate their confidence in several statements about science and medicine. On some, there's broad acceptance. Just 4 percent doubt that smoking causes cancer, 6 percent question whether mental illness is a medical condition that affects the brain and 8 percent are skeptical there's a genetic code inside our cells. View gallery Online: AP-GfK Poll: Evid3nc3 « An emotional and intellectual journey from faith to evidence. 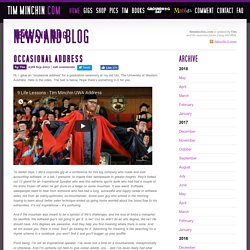 I gave an “occasional address” for a graduation ceremony at my old Uni, The University of Western Australia. Here is the video. The text is below. Hope there’s something in it for you. “In darker days, I did a corporate gig at a conference for this big company who made and sold accounting software. And if the mountain was meant to be a symbol of life’s challenges, and the loss of limbs a metaphor for sacrifice, the software guy’s not going to get it, is he?

However, I have had large groups of people listening to what I say for quite a few years now, and it’s given me an inflated sense of self-importance. My Faith: Returning to church, despite my doubts. Editor's note: Andrea Palpant Dilley is the author of “Faith and Other Flat Tires.” 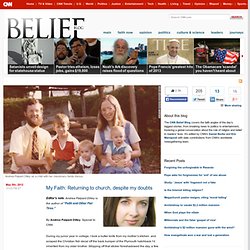 By Andrea Palpant Dilley, Special to CNN During my junior year in college, I took a butter knife from my mother’s kitchen and scraped the Christian fish decal off the back bumper of the Plymouth hatchback I’d inherited from my older brother. Stripping off that sticker foreshadowed the day, a few years later, that I would walk out of church. Kurt Wise and the Religious Lobotomy « Tiny Frog.

As a followup to my last post, I wanted to say a little more about Kurt Wise. 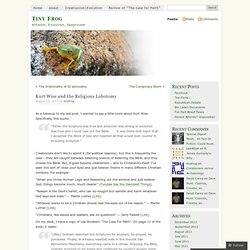 Specifically, this quote: “Either the Scripture was true and evolution was wrong or evolution was true and I must toss out the Bible. . . . It was there that night that I accepted the Word of God and rejected all that would ever counter it, including evolution.” Creationists don’t like to admit it (for political reasons), but this is frequently the case – they are caught between believing science or believing the Bible, and they choose the Bible. A blog by Jason Boyett about Doubt, Christianity, Culture & Writing - O Me of Little Faith.

You said you had a big announcement coming today. 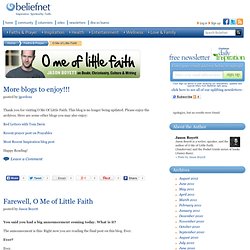 What is it? The announcement is this: Right now you are reading the final post on this blog. Ever. Ever? Ever. So you’re shutting this blog down? Well, I’m going to stop writing any new posts for it. Well, that’s good news. That’s weird. So are those photos. You might also want to browse through the archived Conversions series and “Voices of Doubt” posts. Why are you shutting down the blog? Three reasons. What’s the second reason? Being a religious blogger is tiresome. You don’t like when people yell? I don’t mind the yelling in general — bloggers need to develop a thick skin for that kind of stuff — but there comes a point when I’ve begun to wonder if it’s doing any good.

At any rate, I’m not just closing the door on doubt-blogging but blogging about religion in general. And… And…now you can commence with the weeping?