Developer FAQ · LightTable/LightTable Wiki. General How do I get every object of a given type? 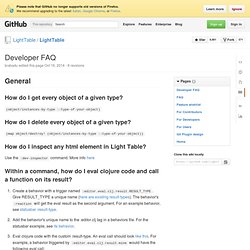 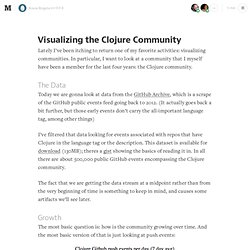 In particular, I want to look at a community that I myself have been a member for the last four years: the Clojure community. The Data Today we are gonna look at data from the GitHub Archive, which is a scrape of the GitHub public events feed going back to 2012. (It actually goes back a bit further, but those early events don’t carry the all-important language tag, among other things) I’ve filtered that data looking for events associated with repos that have Clojure in the language tag or the description.

The fact that we are getting the data stream at a midpoint rather than from the very beginning of time is something to keep in mind, and causes some artifacts we’ll see later. Growth The most basic question is: how is the community growing over time. Couple of interesting things about this graph. Clojure Gazette. Paulwittmann/alien-technology-9elements. Reinventing the REPL - Kovas Boguta. Kovasb/session. Session. Bhauman/lein-figwheel. Fortran, Clojure, Haskell and Julia are not at war - podsnap. There was this perplexing article in Ars Technica about replacing Fortran for scientific computation.The main performance advantage of Fortran is that its restrictive data structures facilitate vector optimization.There are many ways to match and even outperform Fortran, while using other languages.But it's OK to use Fortran if you want to.Ars Technica notwithstanding, Clojure, Haskell and Julia are not locked in competition to replace Fortran.Ars Technica notwithstanding, Fibonacci sequences may be something we learned about once, but it is difficult to disguise their irrelevance to scientific computing. 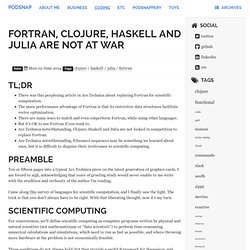 Preamble Ten or fifteen pages into a typical Ars Technica piece on the latest generation of graphics cards, I am forced to sigh, acknowledging that years of grueling study would never enable to me write with the erudition and verbosity of the author I'm reading. Came along this survey of languages for scientific computation, and I finally saw the light. Scientific Computing The Arsticle.

Reflections on an internship. Our latest superstar intern, Max, has just left us to go back to his last year of university at Queen Mary University of London. 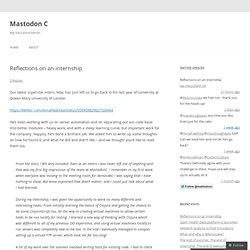 He’s been working with us on server automation and on separating out our code base into better modules – heavy work, and with a steep learning curve, but important work for the company. Happily, he’s done a brilliant job. We asked him to write up some thoughts on how he found it, and what he did and didn’t like – and we thought you’d like to read them too. From the start, I felt very included. Even as an intern I was never left out of anything and that was my first big impression of the team at MastodonC. Using core.async and Transducers to upload files from the browser to S3 — Martin Klepsch. In a project I’m working on we needed to enable users to upload media content. 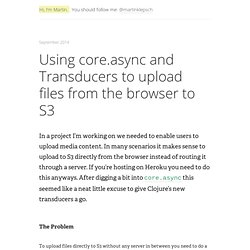 In many scenarios it makes sense to upload to S3 directly from the browser instead of routing it through a server. If you’re hosting on Heroku you need to do this anyways. After digging a bit into core.async this seemed like a neat little excuse to give Clojure’s new transducers a go. The Problem. Mortalapeman/birch-lt. Cursive: Getting Started. Getting Started Here’s how to get started with Cursive. 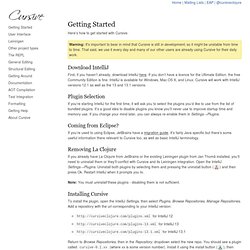 Warning: It's important to bear in mind that Cursive is still in development, so it might be unstable from time to time. That said, we use it every day and many of our other users are already using Cursive for their daily work. Download IntelliJ First, if you haven’t already, download IntelliJ here. Plugin Selection If you’re starting IntelliJ for the first time, it will ask you to select the plugins you’d like to use from the list of bundled plugins. Cloud IDEs and The Importance of being Open. A few days ago, we made the decision to open source our IDE, an integral part of our product and company. 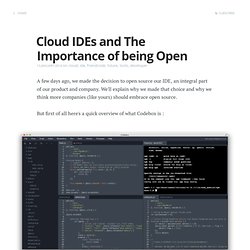 We'll explain why we made that choice and why we think more companies (like yours) should embrace open source. But first of all here's a quick overview of what Codebox is : Codebox is an IDE built with web technologies (NodeJS, JS/CSS/HTML) that runs in the Cloud but also on any unix-like machine (Linux, Mac OS X). It's an open source component of Codebox.io. Powerful, Collaborative Online/Offline Cloud IDE. GoyaPixel. FroSCon Clojure Group Bonn. Noprompt/garden. Skills Matter. Solving Clojure Boot Time.

My Kraków adventure. Day one of EuroClojure 2014. The beautiful view from the conference centre. 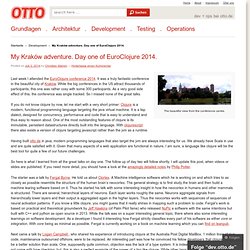 Last week I attended the EuroClojure conference 2014. It was a truly fantastic conference in the beautiful city of Kraków. While the big conferences in the US attract thousands of participants, this one was rather cosy with some 300 participants. As a very good side effect of this, the conference was single tracked. So I missed none of the great talks. If you do not know clojure by now, let me start with a very short primer: Clojure is a modern, functional programming language targeting the java virtual machine. The adventure continues. Day two of EuroClojure 2014. Watch?v=shm7QcJMvig&feature=youtu. Cuda_1 - micromanager-london-kings - Calling CUDA from Clojure - Add-ons to Micromanager. Functional%20GPU%20Programming%20Overview%20. Clojure trifft Neo4j: Neocons 3.0.0 erschienen. Clojure_Youtube by d3dhemmer.

A simple Clojurescript app. In May, I left Canada to do some long-term travelling with my wife. 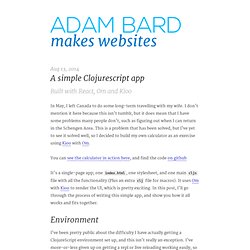 I don't mention it here because this isn't tumblr, but it does mean that I have some problems many people don't, such as figuring out when I can return in the Schengen Area. This is a problem that has been solved, but I've yet to see it solved well, so I decided to build my own calculator as an exercise using Kioo with Om. You can see the calculator in action here, and find the code on github It's a single-page app; one index.html, one stylesheet, and one main cljs file with all the functionality (Plus an extra clj file for macros).

It uses Om with Kioo to render the UI, which is pretty exciting. Environment. How to take over the computer of any Java (or Clojure or Scala) developer - Ontoillogical. The other day I started hacking on a Clojure project of mine, when I saw my firewall display this: I’m downloading clojure.jar from http//repo.maven.apache.org over port 80! 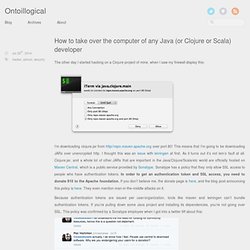 This means that I’m going to be downloading JARs over unencrypted http. I thought this was an issue with leiningen at first. As it turns out it’s not lein’s fault at all. Clojure.jar, and a whole lot of other JARs that are important in the Java/Clojure/Scala/etc world are officially hosted on Maven Central, which is a public service provided by Sonatype. Because authentication tokens are issued per user/organization, tools like maven and leiningen can’t bundle authentication tokens.

Prototyping in Clojure. We recently completed an alpha on identity assurance for organisations. The objective of an alpha is to gain understanding of a service and validate a design approach by building a working prototype. As part of the alpha, we built a set of interacting prototype applications representing a number of separate services as assurers and consumers of identity information. Because our objective was understanding and validation, these prototypes did not use any real user’s data.

We wanted our prototype to: evolve rapidly, adapt quickly to feedback from our user research, and to be able to change direction entirely if necessarybe realistic enough to validate whether the service we were exploring was technically feasiblebe simple and focus on the service we were trying to explore, rather than getting bogged down in implementation details. Light Table Blog. 18 Jul 2014 - Jamie Brandon People regularly tell me that imperative programming is the natural form of programming because 'people think imperatively'.

I can see where they are coming from. Why, just the other day I found myself saying, "Hey Chris, I'm hungry. LightTable/LightTable. BirdWatch. BirdWatch client using ClojureScript and Om - Matthias Nehlsen.

Bluemix performs a similar function to Heroku and Azure, allowing you to run applications in a variety of languages and has the advantage that it built upon the open Cloud Foundry platform. Having played played around deploying Clojure apps on IBM's internal Bluemix beta, I thought I'd write a guide to getting started with Clojure on Bluemix now that it is open to the world. To sign up, go to In order to do this, you need to create an IBM id if you don't already have one. This gives you access to the Bluemix dashboard from which you can create new apps and services. 2014-07-03_2126 - David-Alliance's library. Oskarth/webframework. Talk: The imminent revolution of functional append-only databases (DB's are fn) NOSQL Databases. Presentations, Videos, and Slides. Watch videos and review slides from presentations about Dart. You can also watch our 5-minute video tutorials, Dart Tips.

For even more videos, check out this collection of community-curated videos about Dart. Developing Dart Editor. Clojure for Machine Learning. eBook: $29.99 Formats: $9.99 save 67%! Print + free eBook + free PacktLib access to the book: $79.98 Print cover: $49.99 $49.99 save 37%! Free Shipping! Light Table Blog. 10,000 Processes. Building static sites in Clojure with Stasis. What Makes PHP the Most Preferred Language in Web Development? Clojure # - SymbolHound Search. Michael-okeefe/eom. Git Plugin design · LightTable/LightTable Wiki. Overview. Yeller - Tuning Clojure - Experiences from a 45x performance improvement. This is a blog about the development of Yeller, the exception tracker that helps you kick ass at debugging.

Macro lifecycle in Clojure. Clojure Gazette 1.80. Dear Clojurists, Our next interview of the Google Summer of Code in Clojure is with Reid McKenzie. Daniel Solano Gomez - How Clojure Works: Understanding the Clojure Runtime. Mark Engelberg - Instaparse. XAMPP Installers and Downloads for Apache Friends. Chris Lattner's Homepage. To answer a FAQ: Yes, I do still write code and most of it goes to llvm.org. However, due to the nature of the work, I usually can't talk about it until a couple of years after it happens. :) The Swift language is the product of tireless effort from a team of language experts, documentation gurus, compiler optimization ninjas, and an incredibly important internal dogfooding group who provided feedback to help refine and battle-test ideas. Of course, it also greatly benefited from the experiences hard-won by many other languages in the field, drawing ideas from Objective-C, Rust, Haskell, Ruby, Python, C#, CLU, and far too many others to list.