Minification of JS and CSS Assets with Maven. 1. 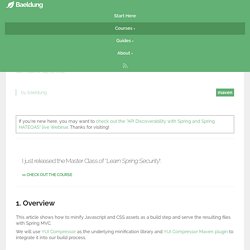 Overview This article shows how to minify Javascript and CSS assets as a build step and serve the resulting files with Spring MVC. 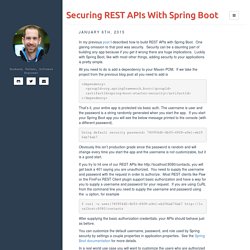 One glaring omission to that post was security. Security can be a daunting part of building any app because if you get it wrong there are huge implications. Luckily with Spring Boot, like with most other things, adding security to your applications is pretty simple. [Guide] Building a simple REST API with Spring Boot. Simple getting started blog post on how to create a Spring Boot application from Scratch! 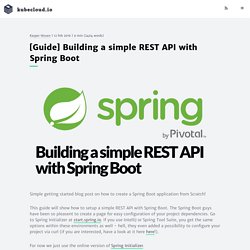 This guide will show how to setup a simple REST API with Spring Boot. The Spring Boot guys have been so pleasent to create a page for easy configuration of your project dependencies. Go to Spring Initializer at start.spring.io. If you use IntelliJ or Spring Tool Suite, you get the same options within these environments as well - hell, they even added a possibility to configure your project via curl (if you are interested, have a look at it here here!). 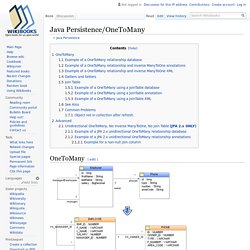 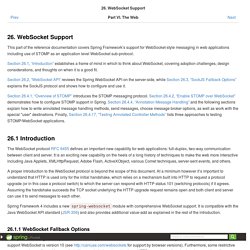 Section 26.1, “Introduction” establishes a frame of mind in which to think about WebSocket, covering adoption challenges, design considerations, and thoughts on when it is a good fit. The WebSocket protocol RFC 6455 defines an important new capability for web applications: full-duplex, two-way communication between client and server. It is an exciting new capability on the heels of a long history of techniques to make the web more interactive including Java Applets, XMLHttpRequest, Adobe Flash, ActiveXObject, various Comet techniques, server-sent events, and others. A proper introduction to the WebSocket protocol is beyond the scope of this document. 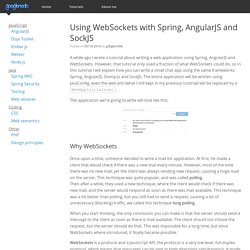 However, that tutorial only used a fraction of what WebSockets could do, so in this tutorial I will explain how you can write a small chat app using the same frameworks; Spring, AngularJS, Stomp.js and SockJS. The entire application will be written using JavaConfig, even the web.xml (what I still kept in my previous tutorial) will be replaced by a WebAppInitializer. GitHub - spring-projects/spring-integration-samples: You are looking for examples, code snippets, sample applications for Spring Integration? This is the place. 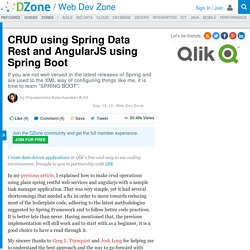 That was very simple, yet it had several shortcomings that needed a fix in order to move towards reducing most of the boilerplate code, adhering to the latest methodologies suggested by Spring Framework and to follow better code practices. It is better late than never. Having mentioned that, the previous implementation will still work and to start with as a beginner, it is a good choice to have a read through it. My sincere thanks to Greg L. Turnquist and Josh Long for helping me to understand the best approach and the way to go forward with Spring Framework. 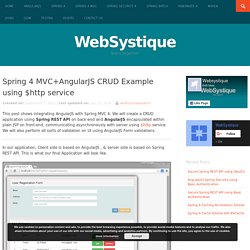 We will create a CRUD application using Spring REST API on back-end and AngularJS encapsulated within plain JSP on front-end, communicating asynchronously with server using $http service. We will also perform all sorts of validation on UI using AngularJS Form validations. In our application, Client side is based on AngularJS , & server side is based on Spring REST API. This is what our final Application will look like. Live Demo. [Solved] java.lang.ClassNotFoundException: org.springframework.web.context.ContextLoaderListener - HowToDoInJava. Spring MVC HelloWorld Using Maven in Eclipse. Java developers often rely on examples to learn Spring framework. 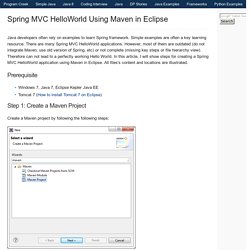 Simple examples are often a key learning resource. There are many Spring MVC HelloWorld applications. However, most of them are outdated (do not integrate Maven, use old version of Spring, etc) or not complete (missing key steps or file hierarchy view). Therefore can not lead to a perfectly working Hello World. In this article, I will show steps for creating a Spring MVC HelloWorld application using Maven in Eclipse. 1. Introduction — Applications orientées données - Cours CNAM NSY135.

How To Migrate Your Weblogic or WebSphere App to Tomcat. There is no shortage of well-known reasons for wanting to migrate your Java EE web application to open source Tomcat. 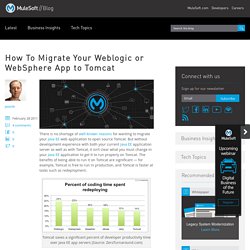 But without development experience with both your current Java EE application server as well as with Tomcat, it isn’t clear what you must change in your Java EE application to get it to run properly on Tomcat. The benefits of being able to run it on Tomcat are significant — for example, Tomcat is free to run in production, and Tomcat is faster at tasks such as redeployment. Tomcat saves a significant percent of developer productivity time over Java EE app servers (Source: ZeroTurnaround.com) It’s easy to migrate your Java EE app to Tomcat as long as it’s mainly a web container app, and as long as you know what you might need to change in your app’s code to get it running on Tomcat.

Migrating Applications From IBM WebSphere to Apache Tomcat. SOAP Webservices in Java Example using Eclipse - JournalDev. Soap Webservices in java can be developed in may ways. We learned about JAX-WS SOAP Web Services in our last tutorial, today we will learn how we can create SOAP web service and it’s client program using Eclipse. Here we will not use JAX-WS, we will be using Apache Axis that is integrated in the Eclipse and provide quick and easy way to transform a application into Java Web Service and create client stubs with test JSP page for testing purpose.

SOAP Webservices in Java I am using Eclipse Mars Release (4.5.0) for this tutorial but I think these steps will work with older versions of eclipse too. EJB 3.2 : Eclipse + Maven 3 + Wildfly 9 (Tutorial 1) – Let's prog! How to configure an EJB 3.2 project using Eclipse, Maven 3, Java 8, and WildFly 9? Settings summary : 2 WildFly instances in the same machine, so this requires fixing offset and node names.Eclipse Mars which requires JDK 8 (but programmers are evilish, they can find million workarounds for it…)Eclipse Mars which requires downloading adapter for WildFly 9Any Eclipse requires pointing on the right Maven 3 installation.